AROUND THE SCORN: Once again, South Carolina contemplates life without Lattimore

Share All sharing options for: AROUND THE SCORN: Once again, South Carolina contemplates life without Lattimore

• LOOK A THIS AILING HIPSTER. Marcus Lattimore was plagued for the first few weeks of the season by questions about the strength of his surgically repaired knee, which inevitably bubbled back to the surface this week in the wake of his less-than-Herculean stat line at LSU. (As if anyone manages a Herculean stat line at LSU.) So maybe he should look on the bright side: If he's tired of talking about the knee, this should make for a refreshing change of pace.

Obviously, that is not the ideal mid-week headline for a team playing for its season in a make-or-break game in the SEC East. Assuming Lattimore has lost a step due to the knee injury – highly debatable – he remains one of the most productive players in the conference, and arguable the most valuable to his team. Even Florida safety Josh Evans, who openly suggested to local reporters Tuesday that Lattimore wasn't back to his peak freshman/early sophomore form, gave a respectful nod in the direction of the 243-yard, three-touchdown punch Lattimore packed against the Gators on his first trip to the Swamp, in 2010. He touched the ball a staggering 42 times in that game as a rusher and receiver, still a career high, en route to South Carolina's biggest road win in two decades in the SEC. 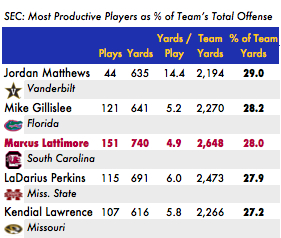 By contrast, 17 touches in Baton Rouge was an astonishingly light load for a guy who's averaged 25 per game against SEC defenses over the course of his career – all the more so because the Gamecocks didn't get much production from anyone else, and no reason to expect that they would. This is a recurring theme: Prior last week, Lattimore had logged 106 touches in Carolina's first four SEC games this year, the highest rate in conference play of any player in the country, and accounted for a higher percentage of his team's total offense (28.0) than any other player in the conference except Vanderbilt's Jordan Matthews and Florida's Mike Gillislee. In Lattimore's case, that number is down significantly from the last two years, when he averaged well north of 30 percent of South Carolina's total production when healthy. Assuming now that he's not, who's going to pick up the slack?

• ALL THE NEWS THAT'S FIT TO REPRINT. So Sports Illustrated has a more or less warmed-over story in its next issue on the ongoing exile of LSU's star cornerback/kick returner, Tyrann Mathieu, which lingers on the misdeeds of Mathieu's incarcerated father, hints that the Honey Badger himself may be a drug addict and accuses him of breaking NCAA rules without actually speaking to Mathieu or his family. For their part, the Mathieus seem to have made every attempt (including a threat of legal action) to shoo reporters Pete Thamel and Thayer Evans away. Shockingly, they weren't very impressed with the finished product:

All three declined to be interviewed for SI's article, which Tyrann Mathieu described as "ridiculous" after he read it Tuesday.

Tyrone Mathieu say Sports Illustrated refused to accept their decision not to be interviewed for the story.

"They called from blocked numbers repeatedly, asking me why I was dodging them," Tyrone Mathieu said. "They came to my home and that of my elderly mother on multiple occasions."

Tyrone Mathieu hired a law firm last week to attempt to stop SI's interview requests. The letter from Irpino Law Firm in New Orleans is addressed to Peter Thamel and Sports Illustrated and reads in part, "You have been consistently harassing Mr. Mathieu and his family regarding personal issues. Mr. Mathieu informed you that they have no desire to respond to your inquiries. Despite repeated assertions of this position... you have trespassed on the Mathieu's property and otherwise violated their privacy... Demand is made that you cease and desist from any attempts at making contact with Mr. Mathieu or any member of his family."

People routinely bitch about journalism and the media even when the reporters are appropriately dogged and the result is stellar and penetrating – sometimes especially when the reporters are dogged and the result is stellar and penetrating – because nobody likes being confronted with the notion that someone or something they love is not a beautiful and unique snowflake. So from the outside, there are no grounds to judge whether Thamel and/or Evans actually crossed the line from "appropriately dogged" to "harassment," or whether the Mathieus just need to grow some thicker skin. Certainly the story behind the abrupt exile of one of the most recognizable athletes in America and his unusual (unprecedented?) limbo state on campus has not been fully told, and is a valid one for good reporters to pursue.

As for the result, though, I don't think I'm committing any sins against journalism in suggesting that it is not particularly penetrating. I had high hopes when I saw the cover for a trademark SI profile that put a familiar figure in a new perspective, but came away thinking it only existed for the sake of its own existence.

• I ARE SERIOUS COACH. Because there are few things I find more amusing than Lane Kiffin attempting to sound like an in-charge adult, there are three truly hilarious moments in this video from USC's 24-14 win at Washington:

1. Kiffin awkwardly knocking some Gatorade cups off a table as part of his pregame Rockne routine.
2. Safety Gerald Bowman looking on indifferently as Kiffin reaches a fever pitch, casually chewing gum, oblivious in noise-canceling headphones.
3. "That was a dominating-ass performance!"

• I'LL LOG OFF AND LISTEN. With South Florida in the midst of a four-game losing streak, USF Athletics turned to its official Facebook page Tuesday to solicit questions from fans to be read on coach Skip Holtz's weekly radio show. That went about as well as you'd expect. 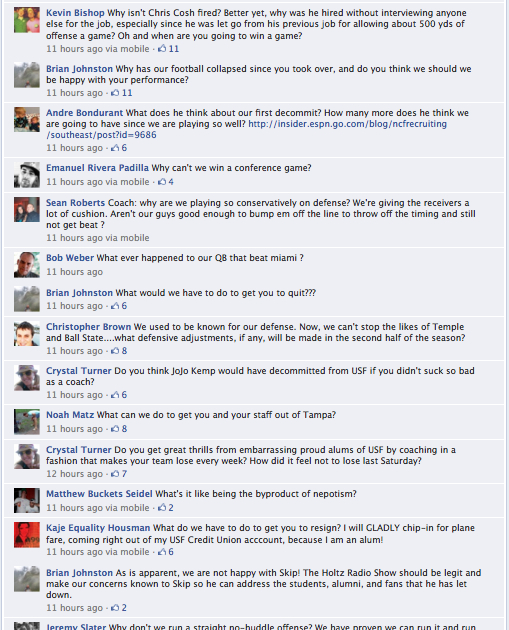 It goes on like that, with fans wondering if "Jim Levitt" is still available and speculating that Holtz is a Russian spy sent to sabotage the program. The intern that had to sort through these for acceptable questions to ask over the air deserves a portion of Skip's buyout.

• THAT'S WHAT THE HELMET IS FOR. Yeah, Steve Spurrier has seen a lot worse in his day than the punch South Carolina defensive tackle Kelcy Quarles threw Saturday at LSU's J.P. Longergan…

…and really, who hasn't? But you know how it is these days with the whole "sportsmanship" thing, and all that PC BS about not condoning "gratuitous violence" and yada yada, so sure, the Ball Coach is leaning toward putting Quarles in time out for Saturday's game at Florida while he thinks about what he's done. And if Quarles is unable to play, anyway, due to a shoulder injury? Funny how that works out, huh?

Quickly… A five-star tailback reneges on his commitment to Oregon, for now. … Texas Tech center Deveric Gallington will play against TCU Saturday despite being arrested for misdemeanor public intoxication and disorderly conduct over the weekend. … True to his commitment to focus on younger players at Kansas, Charlie Weis says freshman quarterback Michael Cummings will see significant playing time at Oklahoma. … Notre Dame has cleared quarterback Everett Golson to return to practice after administering a computer-based cognitive test. … Pat Fitzgerald's game day itinerary for Saturday's Northwestern/Nebraska tilt includes a "mandatory cat nap" at 9:30 a.m. … I'm afraid I'm going to injure myself laughing uncontrollably at this video. … And if UCLA is going to brand its alternative jerseys with names like "L.A. Nights," they should at least come equipped with little flashing lights triggered by the players' movement.