Top 25: Let us now kneel before the Crimson consensus

This week's ballot contemplates inertia in the mainstream polls, USC's chances of another November surge and Ohio State's place in the national pecking order as the standard bearer of a bad conference

Share All sharing options for: Top 25: Let us now kneel before the Crimson consensus

Obviously I'm in the minority on this point, but: Seven weeks into the season, it strikes me as very weird, frankly, that out of 119 voters in the mainstream Associated Press and Coaches' polls, not one of them casts a first-place vote for a team other than Alabama. It doesn't surprise me that the Crimson Tide are No. 1, given their pedigree, their preseason standing and their gaping margins of victory through the first six games. If you started out with the assumption that Alabama is the best team in college football, no one has challenged that assumption. But there's not a single voter with the wherewithal to look at the schedule and challenge some of the assumptions about the teams Alabama has beaten?

The same goes for the consensus No. 2 in both polls, Oregon: Amid the sound and fury of all those lopsided final scores, what does a succession of wins over sacrificial lambs and middle-class also-rans really signify? Right now, only that it's going to take another elite team to beat the Ducks, or maybe even to push them. Why does no one seem to care that they haven't played that team? Between them, Alabama and Oregon haven't faced a single opponent ranked in my top 25 this week, or in the initial BCS standings. Alabama's best victim, Michigan, comes in at the bottom of the latest AP and Coaches' polls, although the Wolverines have yet to beat a team with a winning record themselves and didn't win any converts in their only other game against quality competition, at Notre Dame.

I'm no champion for the BCS computers, but at least they're immune to the inertia that dominates mere mortal minds: The six algorithms in question currently boast four different teams at No. 1 – Alabama, Florida, Kansas State and Notre Dame – and relegate Oregon to No. 6. (On average, Alabama is third among the computers; Florida is No. 1.) Of course, that has a lot to do with the fact that those algorithms are not allowed to account for margin of victory, but considering the human polls seem to be undervaluing strength of schedule at this point, it's also a useful reminder that there's more than one way to skin this cat right now.

As for my own ballot, I always prefer to err on the side of strength of schedule, and on that front, Florida was an easier pick for the top spot this week than last week thanks to LSU's validating win over South Carolina, thereby preserving the value of LSU's head on the Gators' resumé. Of course, the Gamecocks' loss also diminishes their value as a trophy this weekend in Gainesville, and whatever boost Florida gets on the resumé from the winner of LSU's trip to Texas A&M will be offset by the equal and opposite hit absorbed by the loser. As always, the order this week is only a fleeting snapshot.

• The only game that exceeds Florida's win over LSU for value is Kansas State's upset at Oklahoma on Sept. 22, which looks even better now that Sooners have finally hit the gas in back-to-back romps over Texas Tech and Texas. The Wildcats are at West Virginia, and a second high-value road win – though it probably won't be enough to get them ahead of Florida in this space if the Gators beat South Carolina – will certainly put them in the thick of the BCS championship hunt. If K-State wins in Morgantown and Florida loses at home, the Wildcats will probably be on top here next week. 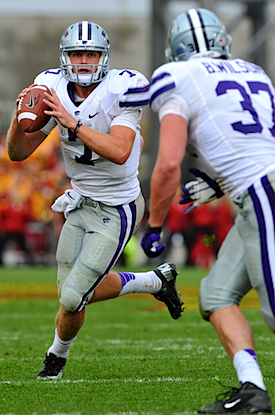 On the other hand, if K-State loses, the top of the Big 12 standings are a hot mess I don't even want to begin to try untangling.

• One-loss teams that still have a realistic shot at the BCS championship if they run the table: Oklahoma, LSU, South Carolina, Texas A&M and USC. Of those five, I think the Trojans are the most interesting because they've been the quietest since their loss at Stanford – including that game, they've failed to cover the point spread in four of their last five – but also have the best chance of making a late surge down the stretch. The individual pieces are essentially the same ones that started clicking around the start of November last year, and made USC a consensus frontrunner in the preseason based on that finish. The schedule offers two big opportunities to move up in the polls (against Oregon and Notre Dame, both in L.A.) without threatening to become a grueling weekly gauntlet.

If any team could afford to sleepwalk a little over the first half of the season, it's the Trojans, and they have. As long as they keep winning, though, I think it's too soon to write them off until we see what happens against the Ducks on Nov. 3.

• In the past month, Ohio State has a) Narrowly escaped a too-close-for-comfort upset bid by Cal, b) Out-slugged Michigan State by a single point on the road, c) Obliterated Nebraska by 24 points, and d) Narrowly escaped a too-close-for-comfort upset bid at Indiana. Make of that stretch what you will, and of the fact that the defense has yielded at least 400 yards in four of the last five games. (The Buckeyes are dead last in the Big Ten in pass defense, at least in terms of yards.) But who's going to beat them? Penn State? Wisconsin? Michigan?

It's not going to be pretty, but we're rapidly approaching the point at which we have to start talking about where OSU fits into the national pecking order as the standard bearer of a bad conference, and how much we care about the fact that it's ineligible to claim the title of champion of that conference. Not that they're not vulnerable – far from it – but the further they go, the more the Buckeyes are going to beg the question. 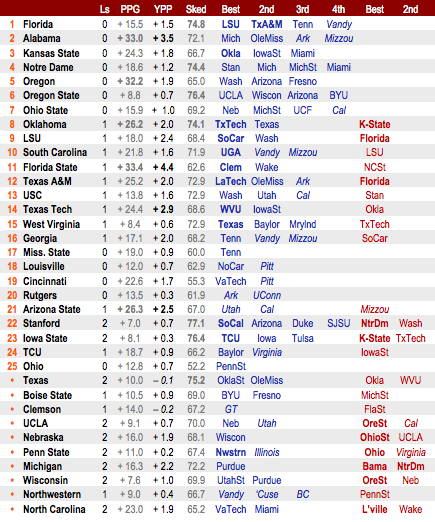