AROUND THE SCORN: Live, from the Longhorn bunker

Share All sharing options for: AROUND THE SCORN: Live, from the Longhorn bunker

This hurts to write because Mack Brown is one of the best. One of the best people, best gentlemen, best recruiters, best leaders, best coaches. Texas has been lucky to have him. It can be argued that only Darrell Royal has been better at Texas. But one nagging thought kept crossing my mind Saturday watching another Texas Red River Blowout: Was that Mack Brown's last game against Oklahoma?

Read into that anything you want. I'm not calling for Mack's firing at all, but powerful and nervous forces can be at work in any program -- especially at a place like Texas. Yep, that hurts to write.

Nothing will get the populace to turn on you quicker than losing to a rival. Saturday raised that angst to a new high. Or is it low?

Oh god, my respect for Mack Brown runs so deep, I can feel my arteries trembling as I type. But the problem is not a new low against Oklahoma – it's an all-too-familiar one: The last two Red River romps rank right alongside the 63-14 blowout in 2000 and the 65-13 debacle in 2003 as the four most lopsided losses of Brown's tenure at Texas, by far, and among the worst in the history of the series. Just thinking about it is going to rupture my spleen.

Brown, of course, insists that job security is not an issue, and feels (probably rightly) that he still has "time to fix it." But Saturday's flop put the lie to the notion that Texas has turned a corner after two disappointing seasons in 2010 in 2011, or that last year's investment in a youth movement is on the verge of yielding returns that justify the growing pains: For the third consecutive season, UT will not win the Big 12, and will not play in a BCS game. Worse than that, veteran players who made up that movement are beginning to criticize the "effort and relentlessness" of the defense and use words like "cancer" to describe teammates who aren't playing hard enough. And worse than that, the defense will be playing the rest of the season without its best player, defensive end Jackson Jeffcoat, victim of a pectoral injury.

The only relatively good news out of Austin is that starting quarterback David Ash didn't break his wrist, after all, though it may be a week or two (or more, who knows?) before he's able to play with it. Considering the wrist initially looked like this on Saturday: 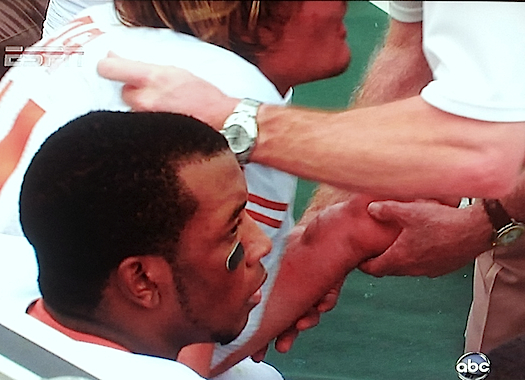 …I think that qualifies as a moral victory.

• THINK OF IT THIS WAY: YOU COULD BE ARKANSAS. The Razorbacks have pulled out of their September spiral to win two in a row in over the SEC's truly desperate doormats, Auburn and Kentucky, but that hasn't changed the fate of interim coach John L. Smith, who is still on the first wagon out of Fayetteville at the end of the season. Already, his boss is making no bones about the fact that he's in the "research" phase of finding Smith's successor, and already has a timeline for making the decision:

LITTLE ROCK, Ark. (AP) — Arkansas athletic director Jeff Long wants a football coach with "discipline and accountability." Someone with "honesty and integrity on and off the field."

And he would like that coach in place within two weeks of the end of the regular season, which wraps up Nov. 23 when No. 6 LSU visits Fayetteville. …
[…]
First, Long said he wants to quickly sift through any coaches who are trying to leverage for a raise at their existing schools and that he's looking for a leader who wants to build a national champion and not be intimidated by competing in the Southeastern Conference.

That article plays along with Long's token insistence that JLS is a contender for the job, which would be an absolute boon to bloggers – I mean, come on…

…but probably would not go over so well among the more relevant demographics in Arkansas. Who would? As of Monday, the local odds listed Charlie Strong and Kirby Smart as the leaders in the clubhouse.

• THOU HAST MOCKED AIRBHG. It took a month, but the malevolent deity bent on tormenting Iowa running backs has finally succeeded in sidelining walk-on Mark Weisman, who appears unlikely to play Saturday against Penn State after injuring his ankle in the Hawkeyes' overtime win over Michigan State – Weisman's fourth consecutive game over 100 yards since emerging from the bottom of a depth chart wiped out by injuries and attrition. Kirk Ferentz said today that initial MRIs on the Hebrew Hammer's ankle were "encouraging," but he still assumes Weisman will not play against the Nittany Lions, leaving the job to a recently recovered (and appropriately terrified) true freshman, Greg Garmon.

• EVERYBODY LOVES SABAN. Everybody that actually knows him, anyway. OK, so maybe not everybody:

KNOXVILLE, Tenn. (AP) — Tennessee defensive end Darrington Sentimore says he still has plenty of friends at Alabama, where he began his college career. He apparently doesn't include Crimson Tide coach Nick Saban among them.

"With some players, he'd see you in the hallway and he'd just walk right past you like he (didn't) see you," Sentimore said.

The 6-foot-2, 288-pound Sentimore said he would have extra motivation Saturday when Tennessee faces the top-ranked Tide.

"I want this game more than any other game because I want to beat Saban," Sentimore said.

Saban has analyzed this statement and calculated that Sentimore's bitterness is worth approximately 1.667 points as a result of additional motivation as "billboard material." As he has already determined the final score of Saturday's game will be Alabama 38, Tennessee 6, he'll let it slide.

• #ROLLBUFFS. Also intent on beating Nick Saban this weekend: Lane Kiffin, even if he has to pretend that Colorado is Alabama to do it.

USC is treating Colorado like Alabama this week, going so far as replacing Colorado logos with Alabama logos on the depth chart.

This is like using a scrub in practice to simulate the opposing team's best player, which always works every single time. Have they inquired about getting the Buffaloes to wear crimson and white uniforms to enhance the effect?

(In slightly more relevant USC news – but only slightly – Kiffin has reopened the competition for the starting left tackle spot, citing incumbent Aundrey Walker as the most penalized player on the team.)

• IF YOU MAKE THE ACC CHAMPIONSHIP I'LL BUY THE FANCY GUACAMOLE. How anxious is Miami quarterback Ryan Williams about the prospect of making his first start as a Hurricane Saturday against Florida State? Let's just say that when he gets home after watching film of the Seminoles' face-stomping defense, it's a "double meat" kind of week:

University of Miami quarterback Ryan Williams had a special dinner Monday — something to keep his appetite under check and his outlook sunny until football practice Tuesday.

For the record, Williams does have a full season of starting experience under his belt at Memphis, where he led arguably the worst offense in major college football in 2010. Relatively speaking, he was a bright spot on that team, but that's relative to Memphis. Relative to regular starter Stephen Morris, just two weeks removed from setting the single-game ACC passing record? If he can stand on his gimpy ankle by kickoff, coaches are going with Morris.

Quickly… The next issue of Sports Illustrated recounts the troubled history of Tyrann Mathieu. … Texas Tech safety Cody Davis was less than impressed impressed with West Virginia's attitude in Lubbock. … Notre Dame quarterback Everett Golson hasn't been cleared to play against BYU after suffering a concussion against Stanford, but Brian Kelly is committed to making the Cougars prepare for a running quarterback, anyway. … Oklahoma State quarterback Wes Lunt is listed as day-to-day, but could have played against Kansas if necessary. … A 19-year-old Penn State cheerleader is in critical condition after falling five stories from her apartment window. … Gary Patterson says TCU still has to "learn who to hate" in its new conference. … Iowa State is auctioning off Paul Rhoads' broken headset. … A Columbus radio host is suspended for tweeting that he hopes Desmond Howard will "get fired or die." … And if you've ever wondered how far you would have to go to actually be arrested for obscenity at an LSU game, this random South Carolina fan has your answer.