BCS Realpolitik: And now, welcome back your Crimson overlords

In a perfect world, the Bowl Championship Series would not exist, and it can't go away fast enough. Until it does, though, we still live in the world we live in. So each Sunday night for the rest of the season we'll examine what the new BCS numbers mean for the ever-evolving championship landscape. Rooting interest: Chaos. Always chaos.

Share All sharing options for: BCS Realpolitik: And now, welcome back your Crimson overlords 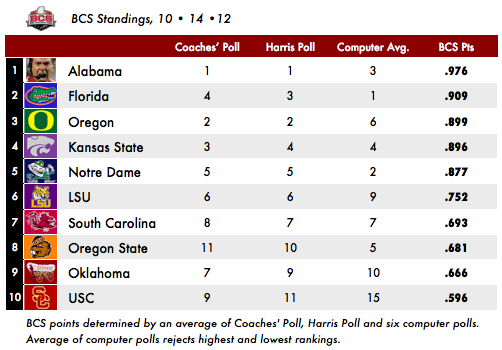 Only four teams have made the championship game from outside of the top five at the first checkpoint: Ohio State in 2002, LSU in 2003, Florida in 2006 and Florida again in 2008. Only LSU in 2003 (No. 12 in the initial standings) has come from outside of the top ten at this stage. So yes, while there is plenty of race left to be run, several hands to be dealt, etc., and it is obviously hilarious to remember that one time South Florida, Boston College, Arizona State and Kentucky all looked like legitimate contenders at this point in the season, you're pretty much looking at the full deck right here. It's just a matter of how it gets shuffled over the next eight weeks. 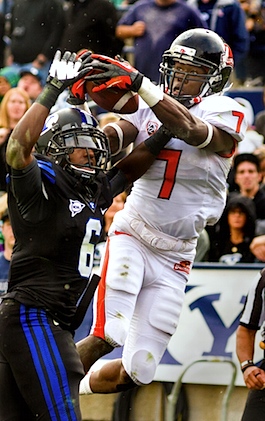 • Digital Love. Predictably, the biggest disparity between hu-mahn pollsters and the computer polls involves the Oregon schools: Where puny mortal minds continue to be held in thrall by Oregon's flashy pedigree and gaudy margins of victory over a forgettable succession of also-rans, the algorithms are gaga over the Beavers' solid, cupcake-free strength of schedule. (Frustratingly, BCS computers aren't allowed to factor in margin of victory, but even if they were, there is no comparison between a non-conference slate consisting of Arkansas State, Fresno State and Tennessee Tech, all at home, and one consisting of Wisconsin and BYU, the latter on the road.) The opinion gap will narrow as the two schedules begin to even out a bit, and will eventually be rendered irrelevant by an actual event: The annual "Civil War" showdown on Nov. 24, in Corvallis.

The real loser among the computer polls: The ACC. Florida State and Clemson are still regarded highly enough by the human polls to land in the top 25 overall (FSU is 14th; Clemson 19th), but the computers reject them almost entirely – among the machines, the Seminoles and Tigers have just one top-25 "vote" apiece, pretty much dispelling any notion that Florida State can still sneak back into the championship picture if it runs the table on the heels of its loss at N.C. State. Four of the computer polls exclude the Seminoles and Tigers both.

Of course, it can always be worse...

• B1G Trouble. I'll spare Big Ten fans the suspense: With Ohio State ineligible for the standings due to NCAA sanctions, the B1G placed zero teams in the initial standings. That nearly mirrors the mainstream human polls, which both include Michigan this week at or near the bottom but otherwise leave the Big Ten twisting (again) aside from the Buckeyes. So... you know, there's always the Rose Bowl Just keep reminding yourself that the Rose Bowl will always be there for you.

• For Chaos' Sake. It should go without saying, but it's all chaos right now, and will remain so until the Great Cull that always arrives without warning on roughly the second weekend of November. Between now and the end of the regular season, not including conference championship games, there are a dozen games on tap between teams ranked in the top 15 here:

...and at least that many surprises. (We see you, Texas A&M.) Until further notice, chaos is the natural order.