Facing elimination in the SEC and BCS standings, the Tiger defense put its foot down and put South Carolina in its place

Share All sharing options for: LSU 23, South Carolina 21: Stomping out the skeptics

LSU 23, South Carolina 21
- - -
1. South Carolina led for most of this game, including the first eight minutes of the fourth quarter, which may have obscured just how thoroughly LSU's defense dominated the proceedings. The numbers make that pretty clear: Carolina managed a grand total of 211 yards of total offense on just 3.5 per play, a substantial chunk (more than 40 percent) of which came in the final five minutes of a game that was effectively over. Prior to that, the Gamecocks' output over the first 55 minutes amounted to seven punts, one very costly interception and a single bona fide touchdown drive. (That's excluding the first touchdown "drive," set up by an interception return to the LSU goal line; see below.) Eight of those nine possessions never crossed midfield.

2. And if you'd been told ahead of time that Marcus Lattimore would only touch the ball 17 times en route to the worst night of his career, that's probably exactly the result you would have predicted. Historically, the biggest gap between South Carolina and the true blue-chip programs in the SEC has always been along the line of scrimmage, and that was obviously true in this case on both sides of the ball. The same offensive line that was physically overwhelmed en route to 42 yards rushing against the Gators shoved the Gamecocks around for 258, even with both starting offensive tackles out of the lineup; Carolina's touted front four, including Jadeveon Clowney, failed to register a sack for the first time this year. The same defense that admitted it wore down in the second half in the Swamp responded by throttling Lattimore – his longest gain as a runner or receiver covered nine yards – sacking Connor Shaw four times and eventually harassing him into a pair of late turnovers. 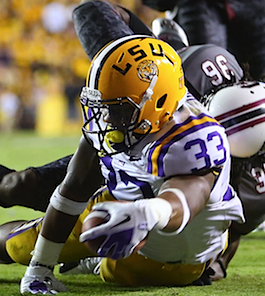 Add that up, and it equals the first time since at least the Washington game in week two that LSU has really looked like the patient, physically overpowering outfit everyone envisioned making another run at the national championship. Seven games in, quarterback is still an issue (see below), and no one has emerged as a reliable big-play threat on the order of a Rueben Randle and Tyrann Mathieu, both of whom were so critical in 2011 in turning ostensibly close games like this one – which was not particularly close on the stat sheet – into blowouts. But any team strong enough to survive in the trenches for long periods of time without a lot of fireworks is going to be in every game, and more likely than not in the championship discussion for the long haul.

3. Another addition to the formula: Hello, LSU ground game. The Tigers began the season with four backs (Michael Ford, Spencer Ware, Alfred Blue and Kenny Hilliard) who combined for more than 2,300 yards and 30 touchdowns last year, and were mostly content to stick with the rotation through the first half of the season. If they were looking for a spark after last week's no-show in Gainesville, though, they may have found it in true freshman Jeremy Hill, a fifth-string, garbage-time option who suddenly found himself on center stage: By the end of the night, he had carried the ball more times (17) than any back on either team, for more yards (124) than any LSU back has managed against an SEC defense since 2008. Only about 50 or so of that number came on the icing touchdown run:

In keeping with the rest of the depth chart, Hill certainly looks the part of an every-down, Milesian workhorse at 6-2, 235 pounds, and none of the other backs on the depth chart are exactly renowned for breaking away from defensive backs in the open field. (For a guy that size, the acceleration in the secondary is kind of frightening.) The only caveat is that he left a little over five minutes on the clock for South Carolina to tack on an essentially cosmetic touchdown, thereby covering the 2.5-point spread – a freshman mistake if Brent Musburger has ever seen one, and he's seen a lot. Next time, think of those scrappy, hard-working gamblers, Jeremy.

4. The obvious exception to all the optimism at LSU is the quarterback, Zach Mettenberger, who gets buried way the hell down here when the Tigers win but remains very much at the front of every Tiger fan's mind, or whichever part is responsible for regulating fear and apprehension. Saturday, his 12-of-25, 158-yard performance against South Carolina was a virtual rerun of his 11-of-25, 148-yard performance in the loss to Florida, both of which hewed closely along the lines of his 15-of-27, 169-yard effort at Auburn. In three SEC games, Mettenberger has yet to throw for a touchdown, and in fact has thrown a potentially killer pick each of the last two weeks.

Against Florida, the defense bailed their QB out by driving the Gators backwards after the turnover, thwarting a rare scoring opportunity in Tiger territory. But dominant as it was against the Gamecocks, even the defense couldn't clean up after this pick in the second quarter:

That single play is the only reason South Carolina was still in this game in the fourth quarter. Obviously Jarrett Lee and Jordan Jefferson didn't put remarkable passing stats last year, but they were efficient and typically guarded the ball with their lives: The 2012 Tigers have already lost more turnovers in seven games (12) than the 2011 edition lost in 14 games (10). Every tangible goal is still in front of the former group if it takes care of business from here on – SEC championship, BCS championship, all of it – but not if keeps giving up free points in games like the last two.

5. Everything is still in front of South Carolina, too, which (statistics notwithstanding) made enough plays to acquit itself pretty well in the most hostile possible environment. I suggested before this game that this road trip, on the heels of last week's overwhelming rout over Georgia, was a kind of litmus test for the Gamecocks' entry to the SEC elite, and it's hard to say they failed that test when it's so easy to imagine literally every other elite outfit in college football turning in the same performance in the same circumstances.

The holy grail for this program, a top-10 road win, is back on the table next week at Florida. An upset there means the path is clear to the SEC title game, a winner-take-all match with Alabama or LSU (or maybe Texas A&M?) and a likely golden ticket to the BCS Championship. Like everywhere, there are looming questions to solve, most notably the persistent lack of reliable playmakers aside from Lattimore. But let's just say that, against a midseason stretch that gives you Georgia, LSU and Florida in consecutive weeks, with the latter two on the road, two out of three ain't too bad.