Judge the controversial finish for yourself: The fact is, opposing offenses keep coming up short, and the Fighting Irish keep on winning

Share All sharing options for: Notre Dame 20, Stanford 13: Survival of the wettest

Notre Dame 20, Stanford 13 (Overtime)
- - -
1. One of my favorite running subplots of the season is Brian Kelly's ongoing trust in beleaguered quarterback Tommy Rees to bail Notre Dame out of clutch situations, despite relegating him to the bench in every other situation. Deep in my heart, I would really like to believe this is Kelly's way of not-so-subtly trolling the segments of the fan base that seemed so determined to have someone, anyone but "Turnover Tommy" running the show after the offense's late fade in 2011. In fact, they have that someone in redshirt freshman Everett Golson, who at least is not doing consistently dumb freshman things to get the team beat. But Notre Dame would not be 6-0 right now without Rees excelling in the role of closer.

When the Irish needed a scoring drive to break a 17-17 tie with Purdue in week two, it was Rees who came on to move the offense into position for the game-winning field goal in the final seconds. When Golson turned the ball over twice against Michigan, Rees came on to score the game's only touchdown. Saturday, after nearly four full quarters on the bench, Rees came on with the Irish trailing 13-10 in the final five minutes, finished the drive for a game-tying field goal with 20 seconds left in regulation, and connected with T.J. Jones for the go-ahead/winning touchdown in overtime. For a team that requires so little from its offense, it's been Rees who has delivered when it does – and only when it does.

2. So anyway, I suppose what you really want to know is whether or not I think this is a touchdown.

In case you've been trapped beneath a sheet of Arctic ice, that's Stanford's Stepfan Taylor, aka "Kulabafi," either definitely scoring or in no way whatsoever scoring the game-tying touchdown in overtime, on the Cardinal's fourth and final chance to even the score from inside the Irish 5-yard line. After breaking off a 13-yard run to set up a first-and-goal at the four, Taylor charged into the breach on four consecutive plays, joining Michigan's Denard Robinson in the process as the only opposing back with 100 yards rushing against Notre Dame this season, and I think he should have been given one more.

Initially, like the refs on the field, I actually thought Taylor was stopped short on that final lunge, but the more I watch it, the more I think my eyes were playing tricks on me: Though his momentum is stopped before he reaches the ball across the plane, he's also lying on top of an Irish defender, meaning he is not technically down. His left elbow does not hit the ground before the ball crosses. He does not lose control of the ball until well after it crosses. I think that's a touchdown. The public face of American reffing thinks that's a touchdown.. Obviously Stepfan Taylor thinks it's a touchdown. His coach, too. 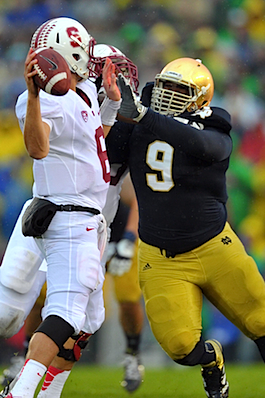 3. But of course it is not a touchdown, thereby officially extending Notre Dame's streak of holding opposing offenses out of the end zone to an incredible four games – 16 consecutive quarters, plus one overtime – and counting. Like any good streak, this one comes with an asterisk or two: The blown call at the goal line on Saturday, the multiple drops by wide open Miami receivers last week, the temporary insanity of Denard Robinson in September. The first victim in the streak, Michigan State, currently ranks 102nd in scoring offense after managing a single touchdown in each of its losses to Ohio State and Iowa. Stanford came closer to breaking through than any of them, not only on the controversial play in overtime, but also on two other opportunities inside the Irish 10-yard line in regulation, resulting in two field goal attempts – one good (see below), one no good. And the Cardinal did actually put the ball in the end zone, when linebacker Chase Thomas pounced on a fumble waiting for him there in the second quarter.

But the fact is, through six games, Notre Dame has allowed three offensive touchdowns over the entire first half of its schedule and none in well over a month. The back half of the schedule includes arguably the two toughest games of the season, at Oklahoma in two weeks and at USC in the finale, but also softens in between courtesy of Pittsburgh, Boston College and Wake Forest. The gold standard for the current century is the mere ten offensive touchdowns yielded by Alabama en route to the BCS title in 2011, which included virtual shutouts of North Texas, Vanderbilt, Tennessee, LSU, Auburn and LSU again. (Penn State and Mississippi State only narrowly avoided that list with garbage time touchdowns in the fourth quarter.) In terms of yardage, the 2012 Irish aren't in that class at all, currently yielding about 100 yards more per game (287) than the '11 Tide (or the '12 Tide, for that matter), but on the scoreboard, somehow, they're still right on track.

4. In fact, the did-he-or-didn't-he debate on the decisive touchdown wasn't even Stanford's biggest complaint with the officials after the game. That title was reserved for a phantom whistle on the Cardinal's final possession of regulation, which (according to him) caused Taylor to be hit for a seven-yard loss on a critical 3rd-and-2 play from the Irish 3-yard line:

"Oh, yeah, I heard a whistle," said Taylor, who finished with 102 yards on 28 carries. "That’s why I stopped. The line stopped as well. We all heard the whistle. I was surprised the play wasn't stopped.

Shaw closed out his postgame press conference with a statement about the whistle.

"I'll just make one comment," Shaw said. "In case you're wondering, just before our last field goal down there, we had a third and 2 and there was a whistle that came from the crowd. That's why our guys stopped playing. It was verified. It was heard. The play did not stop.

"I don't know what the rule is on that. I'll double check with the officials, with the head officials and make sure that whatever we can do gets done in that situation. That one hurt. The whistle came from the crowd. I don't know what can be done about it. I've heard from many people that it's happened here a few times."

Instead of a possible touchdown to cap a 16-play, eight-minute drive, Stanford had to settle for a field goal to go up 13-10. Notre Dame answered with a 12-play, 79-yard march for a field goal of its own to tie, and whatever controversy might have accompanied the mysterious whistle was quickly eclipsed in overtime.

5. The new polls are not out yet, but with losses by South Carolina and West Virginia, the Irish – ranked 7th in both mainstream polls coming into the weekend – are almost certain to move into the top five for the first time since starting out at No. 2 in 2006. (The last time they were ranked in the top five this late in the season was the final regular season poll in December 2005, before a Fiesta Bowl beatdown at the hands of Ohio State.) Brace yourselves: When the first BCS standings are released tonight, the computers may very well rank the Irish No. 1.