Texas Tech's revamped defense has the Big 12's attention. Now, what about its respect?

Texas Tech 49, West Virginia 14
- - -
1. I suppose we have no choice at this point but to actually admit that Texas Tech's defense is kind of good. Like, not even "good by Big 12 standards" good, but… actually kind of good good. The Raiders came into this game ranked second nationally in total defense, first against the pass and seventh in pass efficiency. So far, it's been easy to write those numbers off due to the lame September schedule. But that's not really going to work anymore when it comes to effectively shutting down the most prolific passer in the country.

Lest you think there is anything misleading about any of that, permit Dana Holgorsen to disabuse you of that notion.

It was that kind of day for West Virginia. By almost any standard, Geno Smith had a rough day in the pocket. By his standards, it was a disaster. Through five games, Smith was completing an FBS-best 81.4 percent of his passes; against Tech, he connected on 52.7 percent. He came in averaging 399.2 yards per game on 9.8 yards per pass; against Tech, he went for 275 on 5.0 yards per pass. He came in having thrown for 24 touchdown passes, with at least three in every game; against Tech, he had one. After scoring on their second possession of the game, the Mountaineers were subsequently shut out on nine consecutive drives before finally cracking the end zone again on a meaningless score in the final three minutes.

They had their run as the reigning Greatest Show on Turf, and lord knows they have the firepower to regain the title against the many generous secondaries awaiting over the second half of the schedule. But make no mistake: Without generating a single turnover or even a sack, Texas Tech – Texas Tech which is Texas Tech, now under its fourth different defensive coordinator in as many years – put them in handcuffs.

2. If you were scripting West Virginia's tumble from the national conversation, the offense's sudden anemia would be the twist no one saw coming. The other part – the methodical incineration of the WVU secondary by a pass-happy Big 12 rival – would be the hoary, obvious cliché. Of course it was no secret after its atomic shootout with Baylor a couple weeks back that the West Virginia secondary was prone to bursting into flames at any time, and so it did again today. The spark this time was the right arm of Texas Tech quarterback Seth Doege, who torched the Mountaineers for 499 yards and six touchdown passes, capping extended scoring drives of 75, 69, 82, 86, 69 and 98 yards. Eleven Tech receivers caught at least one pass, 10 of them covering at least 20 yards -– vintage "Air Raid," on both sides of the ball. 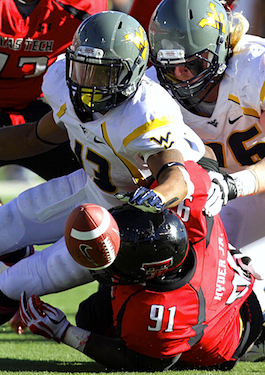 The turning point in the game came with West Virginia trailing 14-7 in the second quarter, when the Mountaineers missed a golden opportunity on a failed 4th-and-3 attempt at the Tech 18-yard line. (Cue Holgo react, above.) On the next play, Doege hit Jace Amaro for the longest play of the game, a 61-yard reception that set up Doege's third touchdown pass two plays later. From there, Tech scored four more touchdowns in a row before WVU found the end zone again, and the prophecies of doom for the defense that gave up 63 points and 700 yards to effing Baylor were fulfilled.

3. That was only the beginning of West Virginia's trouble on fourth down. Last week, the Mountaineers were 5-for-5 on fourth down at Texas, resulting in four of their six touchdowns in that game – the difference, in other words, between scoring 48 and scoring twenty. Against Tech, they were 2-of-7 on fourth down and turned the ball over on downs four times in Red Raider territory – potentially the difference between scoring 49 and scoring fourteen. This is why bad things happen to good headsets.

4. It may be too soon to anoint the Raiders legitimate contenders in the Big 12 – it was about this time last year that they stunned undefeated Oklahoma, and proceeded to lose their last five in especially ghastly fashion -– but clearly they belong among the mass of teams in the conference that can conceivably beat any other team on any given weekend, which qualifies as a step forward from last year's late collapse.

At Auburn, Tommy Tuberville earned a reputation as a big game coach par excellence, winning 5 of 7 there against opponents ranked in the top five and 9 of his last 15 against the top ten. Superficially, his up-tempo, high-flying teams in Lubbock bear almost no resemblance to the more salt-of-the-earth outfits he molded at Auburn, but that's one tendency that has carried over: In two-and-a-half years under Tubs, the Red Raiders have knocked off a ranked team in all three seasons, and a top five team in the each of the last two. But if they make it through road trips to TCU and Kansas State and visit from Texas unscathed over the next three weeks, I'll eat this blog.

5. Streaker! The guys in cowboy hats in this video have been waiting for this exact moment their entire lives:

Check that: They've been waiting since before they were born.