Oklahoma 63, Texas 21: Welcome back again to the Texas tailspin

Share All sharing options for: Oklahoma 63, Texas 21: Welcome back again to the Texas tailspin

Oklahoma 63, Texas 21
- - -
1. This was a brand of beating so complete, so startlingly, impressively thorough from the very beginning, that even as a neutral observer, it pisses you off a little that Texas added those two meaningless touchdowns at the end. Even the faintest, most innocuous hint that Texas demonstrated a shred of competence or competitiveness in this game should be expunged from the record.

The official margins here – 42 points on the scoreboard, 392 yards of total offense on the stat sheet – do not really cover the actual margin on the field. Personally, though there was quite a bit going on in the second half, statistically, I think the most accurate snapshot was at halftime, when Oklahoma led 36-2 and had more yards in two quarters (407) than it had in entire games against UTEP, Kansas State and Texas Tech. The Sooners scored touchdowns on five of their first seven possessions, on drives covering 75, 95, 62, 77 and 45 yards. Meanwhile, Texas' first half possessions resulted in five punts, two interceptions and a safety. By the UT moved the sticks for its first first down in the second quarter, the score was 27-2. 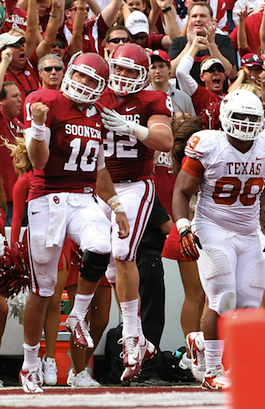 2. So just how much better is this Texas outfit than the disappointing editions we've seen hit the skids after losses to Oklahoma the last two years? Before today, I think that question would have seemed ridiculous: As of two weeks ago, the Longhorns were still looking like one of the most improved teams in the country in a come-from-behind road win at Oklahoma State, and continued to win over skeptics last week by hanging toe-to-toe with West Virginia. We've already seen sophomore quarterback David Ash, the same gangly kid who couldn't hold down the starting job last year as an erratic, turnover-prone freshman, light up Ole Miss on the road and bring his team back from the brink in Stillwater, and through six weeks he was easily one of the most efficient passers in the nation.

All of which would sound a lot more reassuring that today's flop was anomaly if it didn't sound so familiar. Last year, the Longhorns rode into this game ranked 11th, atop a wave of optimism fueled by a promising, 4-0 start in September – including an emboldening, blowout win at UCLA – which seemed to confirm that a young team had grown up, the new quarterback could be trusted and the sudden, all-consuming spiral of 2010 was behind them. Then they got smacked down in a sobering, 55-17 debacle against the Sooners, lost confidence in the quarterbacks and fell right back into the old funk over the second half of the season. Now that the scales have fallen from their eyes, Longhorn fans are looking at a team that's dropped three straight to their biggest rival, nine straight to ranked opponents, in general, and does not appear to be getting any closer. Everyone is a year older. But what's changed?

3. On that note, though the scripts and the final scores are nearly identical, today's beatdown was arguably worse than the 2011 version, because it can't be written off as a growing experience. 2011 was the growing experience. 2012 was the team that was supposed to cash in on that investment. The starting lineup on offense today was a virtual man-for-man match to the starting lineup here a year ago, with the notable exception of a quarterback with the benefit of a dozen career starts under his belt. Including Ash, every Longhorn starter was either a) A returning starter, or b) In at least his third year in the program. "Youth" didn't satisfy anyone after the fast start last year; after the fast start this year, it's a nonstarter. This team, right now, is not very good. 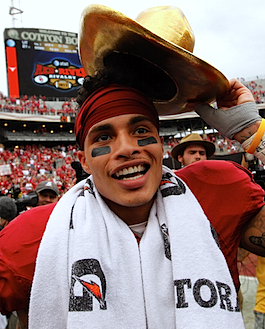 4. Oklahoma, on the other hand… what is this? It's impossible to reconcile the team that legitimately struggled for three-and-a-half quarters at UTEP and was outplayed on its own field by Kansas State with the one that just turned the Longhorns into a pile of cheap hamburgers. The line on the Sooners through four games was that Landry Jones was still struggling to develop a rapport with his renovated receiving corps, the running game was still inconsistent and unreliable, the offensive line was still struggling to account for a couple of major preseason injuries and the secondary was still, you know, a Big 12 secondary. Aside from an interception by Jones that Texas took back for its first touchdown, the glaring concerns went 4-for-4: Jones passed for 321 yards and two touchdowns, five different tailbacks combined for 343 yards on the ground and Ash was picked off twice while averaging 3.9 yards per pass. The Sooners looked every bit the blue-chip frontrunners they're always supposed to be, with no apparent weaknesses.

If you believe that based on this game, I've got some oceanfront property in Muskogee to sell you. Again, we saw Oklahoma vaporize Texas last year, only to turn right around and lose to a four-touchdown underdog on its own field, the first of three disappointing losses down the stretch for a team that began the season ranked No. 1. This team did not begin the season ranked No. 1, and has certainly not looked like a potential contender up to this point. Even if it's as perfect from here on out as it was tonight, it needs help in the Big 12 race re: Kansas State, which owns the head-to-head tiebreaker.

I'm not ready to anoint the Sooners as anything yet, until they show some tendency to replicate this effort. But obviously, in the BCS as well as the Big 12, if this is a sign of things to come, they have a chance.

5. As impressive as Trey Millard's balance and hurdlin' skills were on this huge gain in the second quarter, the guy to keep your eye on is the official trying to run with him along the Texas sideline, around the 0:08 mark:

That was a penalty, by the way, on the random Texas bro who got plowed. On the bright side, apparently that sort of this is a good way to impress one of Mack Brown's daughters.