•ZACH ERTZ and LEVINE TOILOLO, TEs, Stanford
As you may have heard by now, Notre Dame's defense hasn't allowed a touchdown in three consecutive games against competent, name-brand competition. After last week, though, at least some of the credit for that streak goes to Miami wide receivers, who appeared repeatedly behind the fledgling Irish secondary and still came up empty amid a plague of dropped passes.

Stanford has no deep speed to speak of on the outside, especially in the absence of Ty Montgomery, who's out today with an injury. But it does still have the best set of tight ends in the country in Ertz and Toilolo, both huge, improbably athletic Gronkowski types who give the Cardinal the unique versatility to run the entire offense without changing personnel – they can be blockers in an old-school power set on one play, then line up as slot receivers in a shotgun spread look on the next, and they're mismatches for the defense either way. Against Arizona, Ertz and Toilolo averaged 16 yards per catch with two touchdowns (both in the red zone) on 11 grabs; for the season, they're averaging just shy of 17.5 per catch. The Irish won't see a more dangerous pair of hands loping down the field again until USC in the season finale. 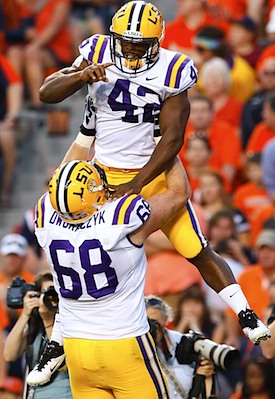 The Tigers have played the last month without their blue-chip left tackle, Chris Faulk, with obvious consequences. Now, they may also be without their blue-chip right tackle, senior Alex Hurst, who missed time this week due to "personal issues" and may no longer be with the team; at the same time, veteran guard Josh Williford is doubtful for tonight's kickoff against South Carolina due to a concussion suffered in last week's loss at Florida. The first answer off the bench at every position is Dworaczyk, a sixth-year senior with 26 career starts and a major knee injury under his belt. Opposite bookends Jadeveon Clowney and Devin Taylor, though, the right answer may prove slightly more elusive.

•JOSH BOYCE, WR, TCU
The Horned Frogs may be on the verge of a meltdown following a) Last week's turnover-marred, 37-23 debacle against Iowa State, and b) The permanent departure of quarterback Casey Pachall for a rehab program, but they hardly have the option of trying to play things close to the vest against the most pedal-to-the-metal offense in the league, Baylor. Last time TCU was in Waco, it was on the wrong end of a 50-point, -yard outburst that turned out to be the opening salvo in Robert Griffin III's impossible Heisman run. So far, the post-RGIII Bears are on pace to reduce all of those records to rubble on the arm of Nick Florence.

Last time we saw Baylor's defense, of course, it was allowing West Virginia's wide receivers free runs into the end zone in a game that averaged more than two points per minute. If redshirt freshman Trevone Boykin has to be Geno Smith, or Josh Boyce has to deliver the 300-yard, 5-touchdown receiving game Stedman Bailey did for the Mountaineers, then the offense is not the problem here. But there is no better secondary for Boyce to begin to get his sea legs against after serving up three interceptions in his first start, and Boyce is a proven security blanket.

•DESMOND TRUFANT, CB, Washington
No one stands to make more money today than the Huskies' All-Pac-12 corner, whose draft stock rose in the Sept. 27 upset over Stanford and could go through the roof if he holds his own against USC's future first-round receivers, Marqise Lee and Robert Woods. Washington is a different team in Seattle, and the Trojans have demonstrated their vulnerability on multiple fronts, but the fact is Trufant is one of maybe five Huskies who could realistically start for the other side. There is no chance of an upset over the most talented outfit in the Pac-12 if they can't get their best game from their most talented player.

•JOHNTHAN BANKS, CB, Mississippi State
It's the same story for the Bulldogs' top cover man, who gets to test his first-round chops against Tennessee's dual deep threats, Justin Hunter and Cordarrelle Patterson, already the proud owners of David Amerson's stock after repeatedly burning N.C. State's would-be All-American in the season opener. Banks is expected to fare significantly better, except for the tiny footnote that technology does not yet exist that will allow him to cover them both at the same time.