Home-Grown Gamecocks at the gates of the promised land

South Carolina's last step to confirming its place among the SEC's elite may be the biggest.

Share All sharing options for: Home-Grown Gamecocks at the gates of the promised land

No one ever set a specific timeline, at least not publicly, anyway, but when he was hired in November 2004 to lift South Carolina out of the ranks of perennial also-rans, I doubt Steve Spurrier thought it would take this long. At his alma mater, Florida, the Ball Coach won the first SEC championship in school history in his second year, and had the Gators playing for the national championship in year six. (They won it in year seven, on the heels of their fourth conference title in a row.) Hell, prior to returning to Gainesville, he won a share of the ACC championship in his third year at Duke. At least South Carolina under Lou Holtz was already accustomed to spending a little time in the polls.

And yet: Here we sit, eight years and zero conference championships later, still wondering if the Gamecocks have the talent, depth, consistency and intangible juice to reach the next rung on the ladder Saturday at LSU, on the heels of arguably the biggest win of the Spurrier last week against Georgia. Inevitably, Carolina has had its share of major upsets and close calls against some of the SEC's upper crust, but the primetime romp over the Bulldogs was something else.

For the first time since arriving in the conference in 1992, the Gamecocks are 6-0, ranked in the top five nationally, and (when healthy) fully pass the eyeball test athletically against the league's elite. This weekend, on the edge of announcing their arrival to a national audience and having the opportunity to affirm it against one of the few universally recognized blue-chip stocks in college football – this is the moment the Gamecocks have been waiting for for 20 years.

Part of that is historical: In two decades in the conference, South Carolina has never beaten a top ten opponent on the road in 19 tries. Before last weekend, Spurrier's teams were 3-11 against top ten opponents anywhere, the last five of those losses having come by double digits. Two of those wins, over Kentucky in 2007 and Ole Miss in 2009, were at the expense of fast-starting teams that wound up finishing nowhere near the top ten.

But part of it is also aesthetic, just to prove again that the top-shelf athleticism on display in the overwhelming wins over Georgia and Missouri – especially on the defensive line, the eternal wellspring from which the myths of SEC dominance originated and continue to be perpetuated – can hold for the second week in a row, on the road, against arguably the deepest, most athletic roster in college football. In other words, to prove that this program is finally ready to join that club.

On that note, one of the most interesting aspects of South Carolina's ascent (because it may be the most sustainable) is the essential, front-and-center role home-grown, Palmetto State talent has played in making it happen. Freakish defensive end Jadeveon Clowney is easily the most hyped recruit to opt for the Gamecocks since anyone thought to start keeping track of that sort of thing, and probably the most hyped in school history. The guy he replaces for that distinction, Marcus Lattimore, arrived in Columbia two years ago as the No. 1 incoming running back in the nation and has gone about backing it up as the most punishing and productive back in the SEC. The coup for Lattimore came on the heels of Spurrier's most impressive in-state effort in 2009, when he struck gold with two of South Carolina's top five prospects, cornerback Stephon Gilmore and receiver Alshon Jeffery, both first-team All-SEC picks now earning millions as high NFL draft picks.

That represents a sea change in the Gamecocks' local fortunes over Spurrier's first four seasons. In 2008, Carolina only signed one of the state's top 10 prospects, and missed on three players – defensive ends Da'Quan Bowers (Clemson) and Robert Quinn (North Carolina) and receiver A.J. Green (Georgia) – who went on to be first-round draft picks. In 2007, USC missed out on the state's top prospect, defensive end Carlos Dunlap, who went on to help anchor Florida's chart-topping defenses in 2008 and 2009 and join the Cincinnati Bengals as a second-rounder. Of the 13 South Carolina prospects rated by Rivals as four or five-star players in 2005 and 2006, the Gamecocks signed only one.

Now look at the lineup that will take the field at LSU. According to the latest depth chart released at the start of the week, 14 of 22 starters Saturday will be South Carolina natives, including the leading rusher (Lattimore), the leading receiver (Bruce Ellington), the top tight end (Justice Cunningham), three starting offensive linemen, the entire defensive line and both cornerbacks (Victor Hampton and Jimmy Legree). You'll also see senior regulars Aldrick Fordham and Damario Jeffery on defense, as well as wide receivers Nick Jones and Shaq Roland, the top- ranked recruit in the state in the 2012 class. 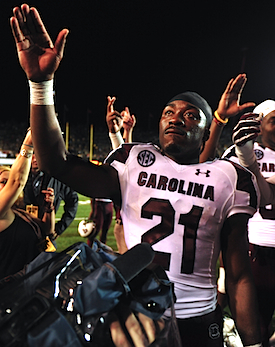 Nowhere has the gap closed more quickly or more obviously than on the line of scrimmage, where South Carolina has traditionally had the most trouble stacking up man-for-man. Now, Clowney, Fordham and Devin Taylor can give LSU's trio of Sam Montgomery, Barkevious Mingo and Lavar Edwards a legitimate run for their metaphorical money as the best set of bookend pass rushers in the conference, and tackles Byron Jerideau and Kelcy Quarles (again, both South Carolinians) are the main reason the Gamecocks rank ninth nationally against the run. On the other side, senior center T.J. Johnson is well on his way to becoming Carolina's first All-SEC offensive lineman of the Spurrier era.

All of which keeps bringing us back to the main point: Two decades into its SEC existence, South Carolina appears to have all the pieces to punch with the heavyweights. The pieces fit together. Already, we've seen them deployed this year against an allegedly competent division rival, Missouri, and an alleged contender on every level, Georgia, to equally devastating effect. LSU was wounded last week at Florida, and comes home with a heightened sense of urgency to find that every goal – SEC and BCS championships included – still very much on the table if the Tigers win out. Depending on how the rest of the season shakes out, it's possible the Gamecocks have beaten better teams (maybe Alabama in 2010, maybe Georgia last week) over the course of their rise the last two years. But they have never played in a bigger game for defining where this program is, or just how far it has left to go.