AROUND THE SCORN: Gene Chizik, too big to fire?

Today's roundup asks, can Auburn afford to do Lucifer's bidding by sending their head coach to the guillotine? Plus: Ohio State reaches for the mythical brass ring, Charlie Weis pulls the most Charlie Weis move ever and it's mid-October: Does Rich Rodriguez know where one of his best players on defense is?

Share All sharing options for: AROUND THE SCORN: Gene Chizik, too big to fire?

• MAYBE HELL SHOULD PUT A LITTLE MONEY WHERE ITS MOUTH IS. While Gene Chizik's players were busy bickering over the lack of leadership in the wake of Saturday's 24-7 debacle against Arkansas, and Chizik's wife was busy alerting her "friends" to Satan's ongoing plot to destroy Auburn football, at least one member of the local media was busy reviewing the fine print in Chizik's contract:

Hypothetical: If Auburn fires Chizik on Dec. 1 of this year, the total buyout amount would be $7.5 million. That would mean a monthly payment to him of about $202,702.70 for 37 months through the end of his contract.

But that’s only if Chizik would be unable to find another job during that time. The contract requires him "to use reasonable efforts to obtain other employment and/or income from third parties." This is standard coaching-contract language, too.
[…]
It’s all but certain that Chizik would be able to get another job – coaches always do – so when he did, Auburn would owe him about $202,700 a month minus his monthly salary at his new place of employment.

Remember: This man is exactly 18 games removed from hoisting the crystal football above his head and bellowing like a silverback gorilla who has aggressively mounted the rest of the sport. Less than two years later, they're trying to figure out the most economical way to kick him to the curb.

Despite Scarbinsky's optimistic reading of the buyout numbers – and the desperate straits on the field, especially if the Tigers fall to 1-5 Saturday as Ole Miss' first conference victim in two years – the conventional wisdom that inspired the reading in the first place is that Chizik's buyout makes him Too Big to Fire this year, unless Nick Saban actually gives him a wedgie at midfield in front of God, the mortified ghost of Shug Jordan and every cameraman in the state following another crushing Alabama victory in the Iron Bowl. (Even Tommy Tuberville got away with only an abbreviated titty twister after his final game four years ago, and his dignity mostly intact.) On the other hand, if he actually makes it through four years, it will be at least one year more than the torch-and-pitchfork crowd who greeted "5-and-19 Gene" with barely concealed dismay in December 2008 would have predicted.

• MYTHIC RIVER. Not one but two separate articles this week – one local, the other disseminated via the Associated Press – raised the specter of 6-0 Ohio State becoming the first team to win the AP national championship while on probation, which would be way, way premature if the Buckeyes weren't openly discussing the prospect themselves:

With Ohio State banned from playing in a bowl, banished from the Bowl Championship Series picture or even being listed in the coaches' poll due to NCAA sanctions, the Associated Press Top 25 offers a bit of incentive for a team with limited time to prove itself.

So, each week when Meyer meets with his players, they discuss the media poll, how far the Buckeyes have come and where they have yet to go. "The thing is, they're going to talk about it when they go home, when they walk to class," Meyer said. "Why not (discuss), 'Here's really where we're at'?"

Meyer knows that his players follow the game. They know who the best teams are, who's rising and falling, who the national contenders are. Why not bring it out in the open?

"These players are just playing football, and they have a right to know where they stand on a national level," he said.

That's a blunt assessment for a guy in a profession that usually obligates its members to robotically repeat the mantras, "We don't pay attention to that stuff," "We're only worried about things we can control," "The polls will work themselves out," and "We're just just focused on [insert upcoming opponent]," even if the prospect of a championship is a distant one, to say the least. At the moment, the Buckeyes are ranked eighth in the latest AP poll, which would normally mean plenty of opportunity to rise if the voters are so inclined. In this case, though, Ohio State isn't just battling the scarlet letter of NCAA sanctions: Its also fighting uphill against the perception that the Big Ten is a wasteland. 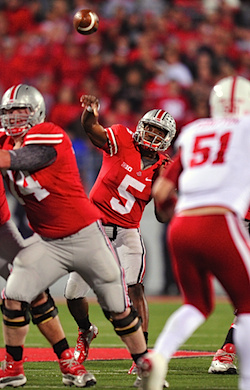 Which it basically is: With losses by Nebraska and Northwestern, the only other Big Ten team in the latest AP poll is Michigan at No. 25. (The coaches' poll, which is contractually mandated to exclude programs on probation, features exactly zero Big Ten teams for the first time… I'm just going to say ever, because that most accurately communicates the historical enormity of the Big Ten failing to place a single representative among the top 25 teams in the country even there is some obscure precedent.) When Auburn ran the table under sanctions in 1993, it beat the eventual SEC champ (Florida) and the defending national champ (Alabama) en route to 11-0 and still only finished fourth in the final poll. The 1994 Tigers (also on probation) beat No. 1 Florida in Gainesville and climbed as high as No. 3 before their winning streak was finally snapped in mid-November.

Ohio State, by contrast, has not played a team that is currently ranked in either major poll – the Buckeyes' toughest non-conference game was a home date with California, in which they legitimately struggled – and at this rate may very well finish the season without having played a single opponent still residing in the final rankings in December or January. They certainly won't be seeing anyone in the top ten, and obviously won't have a chance in the Big Ten title game or a bowl game. Even if OSU keeps winning, and the teams in front of it keep losing, the schedule doesn't offer any incentive for voters to shove it in the NCAA's face.

• EH, HE'LL TURN UP. When he signed with Arizona in 2009, Adam Hall was a relatively high profile, four-star prospect who had grown into a high school All-American about a deep post away from the U of A campus, and went on to start eight games amid an assortment of injuries over his first three seasons. So, first-year head coach Rich Rodriguez, what's going on these days with one of your most visible, talented local players?

Hall hasn't been seen at practices or in meetings for weeks, Rodriguez said. It's unclear whether Hall, who underwent his second knee surgery in as many years last spring, plans to play collegiately again.
[…]
"Maybe he's doing rehab or something like that, but I haven't seen him as part of our daily program," Rodriguez said. "It's been about a month. I've been working with the guys who have been here every day."

Maybe he's doing rehab or something like that. Well, thanks for checking, coach.

Rodriguez's apparent indifference would be one thing if Hall had been formally dismissed from the program, but according to the Daily Star, he's still on scholarship – presumably as a medical hardship – and in that case, he presumably remains enrolled in school. Hall still has a redshirt year to give, and Oklahoma is listed as a possible fifth-year transfer destination due to the presence of three of his old coaches in Tucson, including Rodriguez's predecessor, Mike Stoops. The odds that Rodriguez doesn't know or care about any of that are not credible.

• THINGS THAT EXIST. I am solidly pro-weird under pretty much any and all circumstances, especially within the tacitly militaristic/authoritarian culture of big-time football, so I suppose I have no choice but to revel in the existence of a video in which notable Stanford tailback Stepfan Taylor conducts an interview with himself in the guise of his rapper alter ego, "Kulabafi":

Taylor has posted multiple videos as "Kulabafi" since the spring, and they do not even begin to rank among the weirdest things he's put online. In the words of his head coach: "I think Stepfan is trying hard to control this 'Kulabafi' character. I don't know that he's winning that battle right now."

• THAT'S SO CHARLIE. Hey, wow, Charlie Weis is acting like kind of a dick. Who could have guessed?

Before the weekly football press conference, [Director of Football Communications Katie] Lonergan invited [student reporter Blake] Schuster to a meeting in her office with Mike Cummings, assistant director of communications for KU Athletics. During the meeting, Lonergan warned Schuster about possible negative reactions to last Thursday's Kansan cover art and story. She told him these negative attitudes could be directed toward him.
[…]
Schuster said the purpose of the meeting was not to warn him but to request he not participate in the press conference. "The way I perceived it was there would be a negative effect for me if asked any questions," Schuster said.

To his knowledge, reporters from other news outlets were not warned of potential hostilities. He said he felt the meeting was meant to prevent something from happening in front of other press. Schuster said he interacted with football players and members of KU Athletics when he covered the game against Kansas State and felt no negativity.

Schuster did not ask questions during the conference. 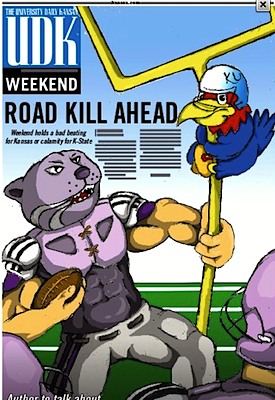 The cover art that succeeded in pissing so many people off was a preview of last week's Kansas-Kansas State game that featured a Schwarzenegger-esque Wildcat toying with a meek, overmatched Jayhawk under the headline "ROAD KILL AHEAD: Weekend holds a bad beating for Kansas or calamity for K-State," which – as predicted by pretty much everyone everywhere – turned out to be a 100-percent accurate portrayal of K-State's 56-16 disemboweling of the Jayhawks in Manhattan, its fourth consecutive win in the series. Weis took exception to the jab on his Twitter feed, which, fine, whatever. No person in authority has ever appreciated the press going out of its way to point out how terrible things are under their authority.

But threatening reprisal, five games into your first season, on the same week that you signal to your team that you're already in the process of sacrificing the rest of 2012 to 2013? That's a purely Weisian tone if I've ever heard one.

Quickly… Arkansas loses two defensive captains to season-ending injuries in as many days. … Washington's secondary coach talks about defending Robert Woods and Marqise Lee. … Lane Kiffin explains why you will have to wrest play-calling duties from his cold, dead hands. … Sabanbot 3000 formulates a human-like response to the prospect of facing Missouri with the Tigers' starting quarterback on the bench. … Frank Spaziani meets with the man who will fire him shortly after Thanksgiving. … Phil Steele has already released his midseason All-America team, for some reason. … A surprisingly smart, in-depth look from Boston at how Chip Kelly influenced the New England Patriots' no-huddle offense. … Apparently Skip Holtz and Terry Bowden were both alive in the early nineties? … And god bless him, Dabo Swinney takes a shot at Nick Saban and the NFL at the same time.