This week's ballot contemplates the virtues of perfection vs. survival, and doesn't arrive at a definite answer. Plus: The resumé chart makes its 2012 debut.

Share All sharing options for: Top 25: Once again, it's Gator time

Now in its seventh year, the College Football BlogPoll is a weekly effort of dozens of college football-centric websites representing a wide array of schools under the oversight of SB Nation. As always, this is not a power poll.

We're into the second week of October now, the point of the year at which preseason assumptions have been pretty well painted over by nearly a half-season's worth of actual results, but that doesn't necessarily make deciphering the evidence any cleaner. It just forces us to ask different questions: How do we define what makes one team "better" than another, and what criteria does that definition value most?

For me, the answer to the first question has always been a strict "resumé" approach that relies as exclusively as possible on the season to date, the games that have actually been played, and rejects any predictive element or abstract assessment of who would win on a neutral field, etc. (I think it's been clearly established by now that my predictions are not to be taken seriously, even by me.) We're far enough along now to basically implement that without asterisks. But we're still left with the second question, the one about priorities, and specifically this week with the question of whether to value the unmatched dominance of Alabama's resumé with the steeper degree of difficulty of Florida's. Or is it better to split the difference with South Carolina?

As overwhelming as 'Bama has been (the Crimson Tide have outscored their first five opponents by 33.2 points per game, and outgained them by a staggering three yards per play; see resumé chart below), its early, lopsided decisions over Michigan and Arkansas don't carry nearly the punch at midseason as they did in the first three weeks, now that we've seen the Wolverines crawl up into a similar ball on offense against Notre Dame and the Razorbacks careen into a dysfunctional, injury-plagued tailspin. On the other hand: Florida cannot begin to match Alabama's invulnerability in the box score, but no team at this point has a more impressive scalp on its wall than the one the Gators claimed Saturday against LSU, or better road kills than their wins at Texas A&M and Tennessee. And then there are the Gamecocks, who have not been challenged since an opening night scuffle at Vanderbilt, and just matched Florida's big breakthrough against LSU by destroying Georgia.

So technically, if you're able to free your mind from the inviolable strictures and conventions of polling, you can chalk this up as a three-way tie at the top until further notice. South Carolina can temporarily end this particular debate Saturday by beating LSU in Baton Rouge, which would mark the 'Cocks biggest road win in two decades in the SEC and send them to No. 1 with a bullet. But of course, Florida and South Carolina will see one another in Gainesville the following week, presumably for the right to face (presumably) Alabama in the SEC Championship Game in December. As always, the current order is only a fleeting snapshot.

• On that note, I think six teams currently sporting a loss have a very good chance of climbing back into one of the two pods bound for the BCS Championship Game if they win out: LSU, USC, Texas A&M, Georgia and the winner of this weekend's Red River Thing between Oklahoma and Texas. Of the six losses in that group, five have come at the hands of an undefeated conference rival currently ranked among the top seven in the mainstream polls, and the other (USC's stumble against Stanford) came against a recognizable winner still sitting in the top 20 with just one loss. Assuming the Trojans are bound for the Pac-12 title game, all six also have multiple opportunities to redeem themselves against validating, name-brand competition. It doesn't hurt that all six are name brands themselves, either.

Two one-loss teams I think can't quite get there: Florida State and Stanford, both of which have a little too much explaining to do after less forgivable lapses against N.C. State and Washington. In the Seminoles' case, even a win over Florida in the regular season finale will probably not be enough to completely eliminate the stink of the ACC, especially an ACC the 'Noles did not dominate start to finish. And although Stanford still has at least three games left against outfits currently residing in the top ten – Oregon, Notre Dame and Oregon State, the first two on the road – en route to a hypothetical rematch with USC for the Pac-12 championship, the last two years have already proven that voters are going to need some serious convincing to lift "one-loss Stanford" into that class.

• Speaking of the Seminoles: The ACC and Big Ten have exactly one game apiece in this week's ballot, fewer even than the Big East (Cincinnati, Louisville and Rutgers are all sitting pretty at a combined 15-0) and right on par with the WAC (Louisiana Tech) and MAC (Ohio U. of Ohio). There may be some surprise over the sudden exclusion of Clemson – it surprised me, too – but the more I think about it, the more obvious that decision is: The Tigers have not beaten a team with a winning record, or even a team within a game of a winning record, and they're actually being slightly outgained on a per-play basis. Again, when you adjust for what Auburn, Boston College and Georgia Tech actually are right now, rather than what we thought they were, Clemson doesn't have much to hang its hat on.

• Proof. Now that we're in October – first BCS standings, dead ahead! – it's time to break out the resumé grid for public consumption: 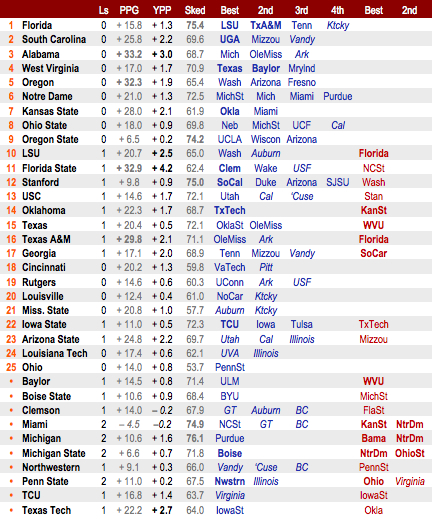