Dennis Dodd, bored like the rest of us, did this thing last week where he took the test offered to officials by USA Football. It’s 100 extremely detailed questions about spotting, penalties and clock rules, and it’s a bitch. Dodd made a pretty dreadful 46; I came in at 55, which -- while twice as good as Dan Marino’s score, according to Dodd -- is still extreme failure by the standards of any class I took following remedial freshman algebra. What can I say? I couldn’t get my mind around the various formulas relating to slope and I’m soft on taunting.

I would like to say that, among my 45 incorrect answers, the rule referenced included the term "exception" three times. So it was close to a 58. Real officials take this test, and presumably navigate the intricacies much more effectively. For the layman, though, there’s really only one obvious question, and even that has nothing to do with anyone’s consumption of the rulebook:

54. 2nd an 8 @ A’s 38. Team A QB takes the snap and stumbles. The ball comes loose when the QB attempts to maintain his balance by holding the ball on the ground on A’s 32. Team B defensive tackle recovers on A’s 34 while grounded.

Who might be my best option for a lifeline on that one? I wonder... 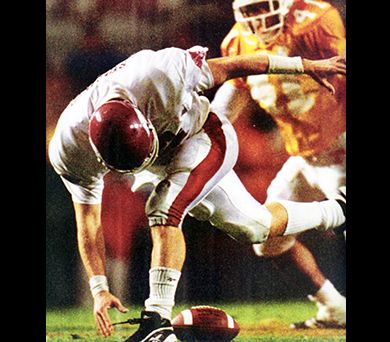 Thanks, Clint! I missed the spot-related questions on either side of that one, but thanks to your famous butterfingers, I pwned No. 54.

But my single favorite question, if only because I want to see an actual game "end" this way -- even if, under the right circumstances, it would never really end in the minds of anyone who witnessed it:

59. 3rd and 8 @ B’s 24. The score is A28-B27. Team A QB muffs the snap. Team B defensive tackle recovers, runs toward A’s goal line and fumbles on A’s 6. A Team A player recovers on A’s 2 and his momentum carries him into A’s end zone where he is downed. Time expires in the second half during the down.

I got that one right, too, thankfully. But I won’t spoil it for the rest of y’all.