Share All sharing options for: Adidas Injects Spirit of Conquering Heroes By Osmosis

From the looks of things, Michigan will not exactly be sniffing around a Big Ten championship this year, and in fact takes the field with only a handful of fifth-year guys (most prominently, defensive starters Tim Jamison, Chris Graham, John Thompson and Morgan Trent) who rode the bench as true freshmen on the Wolverines' last conference championship team, in 2004. So just to make sure the newbies know where they are, new jersey manufacturer Adidas -- that's ah-di-DAHS, stupid American, not uh-DEED-us -- included a small reminder in the form of probably the strangest design element I've ever see on a football uniform:

If you're having a hard time reading that, those are "silicon prints" of the Wolverines' 42 Big Ten championship seasons, according to the note in my inbox from a rep of PR giant Hill & Knowlton, and unfortunately, no, they're not switching to backward numbers: the, uh, prints are only on the inside stitching of the shoulder, where even the players wearing them are unlikely to lay eyes on the past glories they're obliged to carry forth as they help each other pull the shirts tight over bulging shoulder pads. The hope, apparently, is that some of the Silicone of Victors™ somehow seeps into the players' bodies through their sweat glands, and that that imbues them with the spirit of valiant heroes before they succumb to lung difficulty, hardening of the breasts and dryness in the eyes, mouth and vagina (hey, as long as they stay away from pumping parties).

The inside of the jerseys will also feature the great stolen cliché, "Those Who Stay Will Be Champions":

But then it gets a little blasphemous, too, as you can see from this "detail" of the stitching on the road jerseys:

...which, as somewhat dismayed Michigan partisans have pointed out, is a little close for comfort to: 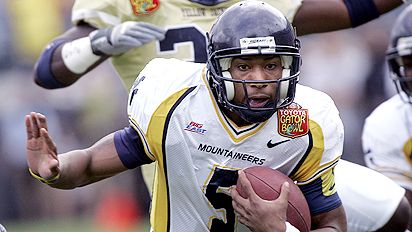 But, you know, it's just finely-wrought, state-of-the-art human motivational material from mines worked by the happy MGoDwarves of the Shembechleron galaxy a jersey.