What To Do With: Northwestern

Share All sharing options for: What To Do With: Northwestern

When I called for votes a couple weeks ago to close out this season’s Absurd/Anticipatory preview series, I got a couple of expected responses from Northwestern fans in my inbox and in the comment thread, where one enthusiastic Wildcat backer pulled out "most exciting team in the Big Ten," "darkhorse for the Big Ten championship" and "NU could be 10-2 or 11-1" in one bold swoop. Whatever. But when decidedly non-Northwestern partisan Brian Cook also shot me a note dubbing the Wildcats "interesting" and hailing C.J. Bacher’s imminent ascent up "the Basanez ladder" of minimally gifted but surprisingly effective Cat quarterbacks (see also: Kustok, Zack and Schnur, Steve), "Northwestern On the Rise" graduated to full-on meme. After all, the magazines may not be on board, but the solid and sober Wildcat blog Lake the Posts has been quietly giddy over NW’s coordinator hires and has not been shy about the prospects of going 8-4, and he doesn't seem like the type for irrational exuberance.

Northwestern has won at least six games four of the last five years, but it seems doubtful the ceiling goes much higher than that. The easiest take on the ‘07 edition, despite its down-the-fairway mark of 6-6, was that it dealt in extremes: the offense was prolific in the passing game (first in the conference in yards) and in moving the ball in general (second in total yards), but terrible at running (last in the conference, largely due to the midseason absence of Tyrell Sutton), holding on to the ball (tenth in turnover margin) and anything relating to defense -- if not for the hall-of-fame collapse at Minnesota, the Wildcats would have paced the league in futility by every conventional measure. For all the fireworks and big yards, the turnovers and blown opportunities left them next-to-last in scoring. They were –9 in turnover margin and can plausibly attribute the losses to Duke (–1, and four very long drives that ended on failed fourth down attempts inside the Devil red zone), Purdue (–4) and Iowa (–2) to giving the ball up. This is not chronic (NW had positive turnover margins in 2004 and 2005) and a pretty good indicator that 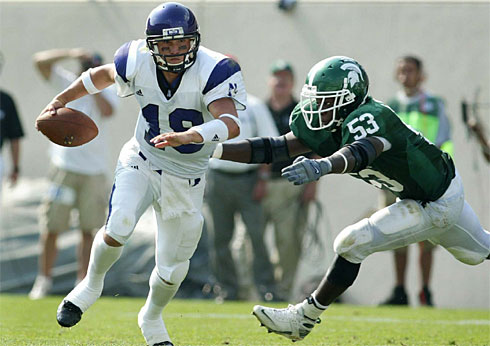 But the fortune wasn’t all one-sided: what about the overtime wins over Michigan State and Minnesota, or the wild, five-point win over Nevada, where the Wildcats were outgained by 100 yards and enjoyed a +2 turnover margin? Even fully healthy, Sutton’s talents will be of little use if the defense continues to fall so far behind so often: 24-10 against Nevada, 20-7 against Duke, 45-0 at the half at Ohio State, 35-14 against Minnesota, 14-0 at Purdue, 21-0 at Illinois, all deficits Bacher was called on to pass the team out of. The run defense was a disaster for the third year in a row, allowing 4.8 per carry in conference games after giving up 4.9 to the rest of the league in ‘05 and ‘06. Bacher was sacked more than any quarterback in the conference except poor Jake Christensen in Iowa, and he threw a huge number of interceptions -- nineteen for the season and eleven in the last four games alone. Et cetera. This was by no means a team on the cusp of breaking through last year.

The main source of optimism seems to be a) Sutton’s return to full-time duty; and c) the schedule, which features no out-of-conference heavies and once again dodges Penn State and Wisconsin within the league. Taken in a certain light, that looks a lot like the formula Kansas rode to glory last year; when a glass-half-full type looks at the schedule and thinks "9-0 going into November!" it’s hard to say "No way" when the obstacles are Iowa, Michigan State, Purdue, Indiana and Minnesota. But in these cases, I always invoke the longstanding "Purdue Rule," coined in response to the unusually high expectations for the Boilermakers’ Michigan-and-Ohio State-free schedule in 2005: when the best thing you have to say about a team is which other, better teams it doesn’t play, that is not a team worth endorsing (this is also true for Iowa, which misses OSU and Michigan again this year, just as they did in the process of finishing 6-6 last year, again). Assuming there are no more bizarre early hiccups like New Hampshire in ‘06 and Duke in ‘07, Northwestern should start 4-0 without much trouble, and if things go well could come out of the midseason stretch against its second tier peers at, say, 7-2, which will probably lead to some attention from the polls and maybe some murmurings about the old "Purple Magic" or something. They could just as easily flop in October and go plodding into Ohio State, Michigan and Illinois like obscure, physically overmatched lambs to the slaughter.

Even assuming the best case through the first three-fourths of the year, all hosannas will be reserved until the Cats actually make a scratch in one of those final three games, and the prospects are not very good: since upsetting Ohio State in 2004, NW has lost the last three to the Buckeyes by 41, 44 and 51 points and failed to gain a yard rushing in Columbus last year; since the oft-referenced, scoreboard-assaulting upset of Michigan in 2000, the Cats have dropped five straight by an average of 19 points and haven’t come within two touchdowns of the Wolverines. The defense gave up 541 yards in a three-touchdown loss to Illinois last November, just as the Illini’s substantial recruiting advantage the last three years would suggest. I think 7-5 would be a successful season and a validation for the direction of the program under Pat Fitzgerald -- certainly a losing record with a veteran team in his third year would summon very dark clouds over the Boy Wonder’s tenure -- but those are pretty large gaps to close to make it special.