The Games: Auburn at West Virginia

Share All sharing options for: The Games: Auburn at West Virginia

The most interesting matchups of the season, chronologically.
- - -

If the new Big East came of age post-Miami with West Virginia's blitzkrieg over Georgia in the 2005/06 Sugar Bowl, its sudden, surprising maturity risks becoming a short-lived footnote on the long term slide toward irrelevance everyone predicted when the Canes and Virginia Tech split five years ago. Not to be too dramatic about it, but as quickly as West Virginia and Louisville shot into the top ten, the stars and architects of their respective surges are moving on to more lucrative, traditionally prestigious grounds, leaving perennial doormat Rutgers, Wannstedt-led Pittsburgh and upstart South Florida positioned as the league's future bellwethers, programs that have netted roughly five combined weeks of national relevance over the last three decades. Already, Louisville has faded from its perch, lost its face as a high-powered menace to scoreboards and descended to its historic, mediocre norm. But right now, still riding the wave from that upset in the Sugar Bowl, West Virginia has a chance. 2008 is, for now, not only Mountaineers' last legitimate hope to contend for a mythical championship in the near future, but the conference's, as well. Not to knock the legs from underneath West Virginia -- indeed, the most successful program without a national title, and proprietor of a pair of to-the-wire championship runs in the fifteen years prior to Rich Rodriguez's arrival, in 1988 and 1994 -- but WVU's middle-of-the-pack recruiting unearthed unprecedented lodes of hidden platinum when it landed Pat White and Steve Slaton, who happened to be the perfect cogs for Rodriguez's self-styled system at just the moment the conference became ripe for exploitation; it struck it rich again when its gamble on grades risk Noel Devine paid off last year. These pieces seemed so perfectly aligned -- like a comet, or the sun hitting the the top of Indy's staff in Raiders of the Lost Ark, or the delicate petals of the Bakawali flower, which bloom spectacularly for three hours before dying -- that I was certain Rodriguez's cold feet toward the Alabama job in December 2006 was his realization that his best chance for the rare championship run was now, in Morgantown, and it was fleeting. The devastation of the loss to Pittsburgh last December, and the toxic  reaction  to it, may have convinced him that window had closed.

Most people might have agreed with him before his old team pulled the same quick-striking shiv on unsuspecting Oklahoma in the Fiesta Bowl it had unleashed on Georgia two years earlier. With Rodriguez in Michigan and Slaton on the bench, West Virginia officially became Pat White's team, and punched its ticket to one last go at the crystal ball before White moves on and the post-Rod era begins in earnest. 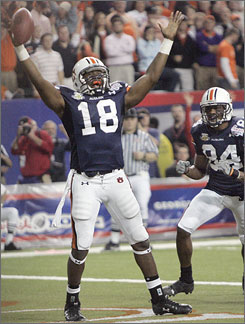 So, you know, we looked into that whole 'spread option' y'all were telling us about, and, well, you'll never believe this, but...
- - -

In that context, Auburn represents the high profile victim the Mountaineers have yet to fell until it's too late -- the impressive wins over Georgia and Oklahoma were sort of postcript validations, but their only contribution to a national championship was in the initial polls the following years. They were setups. If 2008 is finally the followthrough, with a Cardinal-sized void in the vaalue of running the table in the Big East, another high progile BCS victim is required. Colorado and South Florida are nice but routine in the big picture, merely necessary wins for the sake of not losing.

Auburn, on the other hand, on national TV, on Thursday night, in front of one of the wilder under-70,000 crowds anywhere, has to be the that big head on the wall, over the mantel. Otherwise, the occasion is a elegy for the high-end potential of the most successful run in West Virginia history -- perhaps in any endeavor save seceding from the stinking rich Confederates to the east. Another month of conference wins over the respectable-yet-dismissible likes of UConn, Cincinnati, Louisville, Pitt and USF will not close the gap created by blowing the one big shot against the mighty SEC at home.

It's harder to peg exactly where Auburn will be on Oct. 23 -- the Tigers are lurkers in the top ten, nobody's idea of a serious championship aspirant, but if they survive at home against LSU (a series dominated by the home team for the last decade) and Tennessee in back-to-back weeks, they should be 7-0 heading into Morgantown, and the pregame decibel level in that case might reach a record crescendo for a Thursday night affair.

That may not be likely, and anyway, West Virginia is not the culmination of Auburn's season in the way AU is for WVU. This trip, too, is only a setup, a necessary win to raise the stakes for the closing gambit against Georgia, Alabama and, maybe, the East champion in the SEC Championship. It's a destination and a turning point for West Virginia, for good or ill, but just another way station for the Tigers -- albeit a particularly cold, fast, hostile one, and one their BCS ambitions may not survive.