Mid-Major Monday Takes Bulls (and Owls) By the Horns

Share All sharing options for: Mid-Major Monday Takes Bulls (and Owls) By the Horns

Two coaches who won't be around the MAC for much longer, if all goes according to plan: Turner Gill and Al Golden. Or so we're led to believe, after last year's rumor-fueled preview of this winter's carousel. Gill was at one point the apparent frontrunner to take over back at Nebraska, and Golden was one of the final three of four names on UCLA's before he scratched his own name off the list (publicly, anyway) to focus on "unfinished business" at Temple. It was a quasi-breakthrough season for both after abysmal, foundation-laying debuts in 2006; both have in the neighborhood of returning starters, including their quarterbacks and top playmaking skill guys, and expectations of another great leap forward in conjunction with the gains in experience –– almost every major player at Temple and Buffalo is entering his third year on the front line, like his coach, and no one seems shy about openly speculating over MAC championships. 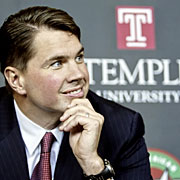 Sure, they're focused on the present, but they can't help looking a little, huh?
- - -

This is, of course, several magnitudes or order more preferable than speculation voer whether either will manage to win a game, and a testament to the recent depths of these programs that 5-7 and 4-8 records made Gill and Golden two of the fastest risers ib the vague thermometer that registers the rekatuve heat if young prospects, and of the seats they're aiming to fill. They inherited such disasters that even a season in purgatory –– Gill's Bulls were 1-11 in 2006, their only win over Golden's flailing Owls, who also won once in the process of being regularly trounced with the youngest team in the country –– but the lunos were all a necessary part of the process. A cleansing, if you will: not only did both teams invest in youth at the expense of imediate returns, but the rock-bottom seasons made for a nice comparison. A losing record is all relative when no one associated with the program has ever been part of a winner there. Five wins, even four, looks teriffic when your predecessors took upward of three years to hit these numbers.

All the more reason for optimism: not only did all of Buffalo and Temple's wins come within the MAC, where both teams had non-losing records (5-3 for Buffalo, 4-4 for Temple) for the first time, but they came all at once –– the Bulls were 3-1 in October, and the Owls were 3-0. In the midst of epic, years-long losing streaks, all of a sudden they got streaky in the other direction.

The flipside of that, of course, is that they combined to go 3-14 the rest of the season, including Buffalo's shocking 42-7 wipeout over Temple in the second game, and neither carried the midseason momentum into November. Buffalo lost two straight to the top two teams in the division, the Ohio-based Miami and Bowling Green, and Temple flopped not only against Penn State, where it was predictably shut out, but also to Ohio U. of Ohio and Western Michigan, against which the Owls less excusably scored ten points altogether. If not for East division whipping boy Kent State, both teams would have finished with a familiar string of losses to end the year.

Instead, by the conference's odd division-only standings system, Buffalo actually tied for the division title with Miami and BG, and Temple finished a game out of the menagerie. Maybe because of the way the season ended, no one is actually biting on either to steal the division, although Athlon, at least, seems to have come very close to pulling the trigger on the Bulls, who it sees winning between four and nine games, with the upper half of the East listed as toss-ups. But neither Gill nor Golden has to win a championship to cement their up-and-coming bona fides. They may not even have to land of the MAC's three (maybe four, depending on what happens with the new Congressional Bowl) bowl bids, which Buffalo has never earned and Temple hasn't seen in almost thirty years. Here, barely removed from the worst situations imaginable, they only have to sustain the sense of a competitive edge that remains a degree or two above the all-too-familiar cellar. With the numbers coming back, they have no excuse not to match last year's totals, and most likely to add to them. Beyond that, there's nowhere to go but up –– that is, somewhere else, with twice the resources and expectations –– or down, as the inevitable cycle guts the lineups built with an eye toward an '08 breakthrough.