A couple weeks ago, I started to get into a really, really foolish argument with a Georgia fan who argued on his Sporting News-hosted "blog" that "Tim Tebow is not a quarterback." Not that he isn’t a good quarterback, or, in this specific case, that he’s not a quarterback the NFL will be particularly interested in next April or in 2010 despite the Tebow Child’s prototype size and strength and ability to make panties disappear while curing malaria with his smile. But rather that Tebow’s fundamental duties in Florida’s offense are not akin to those of a typical passer, that he is a runner first, and that Urban Meyer’s offense is a sort of gimmick that takes the heavy mental lifting out of the hands of its "quarterback" and is ultimately a liability to his overall development. Because he occasionally resembles a single-wing tailback and carried the ball twice as often as any other player in Florida’s offense, Tebow just doesn’t do what a real quarterback does. 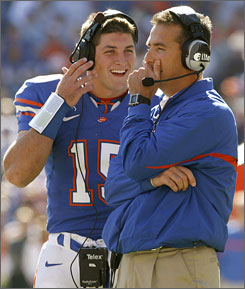 I'm not sure how widespread that sort of sentiment is even among Gator haters, or whether they think such naysaying actually matters beyond Tebow’s pro prospects or their overwhelming need to hate. But, as Saurian Sagacity  pointed out after Tebow’s H*i*m*n win last December, the "one-trick pony" skepticism isn’t confined to obscure Web wingnuts who refer to the kid as "Teblow." At least a few mainstream voters for the trophy had the same impulse.

I'm not sure how widespread that sort of sentiment is even among Gator haters, or whether they think such naysaying actually matters beyond Tebow’s pro prospects or their overwhelming need to hate. But, as Saurian Sagacity  pointed out after Tebow’s H*i*m*n win last December, the "one-trick pony" skepticism isn’t confined to obscure Web wingnuts who refer to the kid as "Teblow." At least a few mainstream voters for the trophy had the same impulse.

As Sagacity also pointed out, "impulse" is the right word, because by any reasonable measure, Tebow’s debut – as a sophomore, a first-year starter in the most vaunted conference in the country – was among the greatest single statistical seasons any quarterback has ever produced. This might be true even if you take away his 900 yards and SEC-record 23 touchdowns rushing: Tebow was second in the nation in pass efficiency, first in yards per attempt, second in touchdown percent. His passer rating was almost 30 points higher than any other quarterback in the SEC, two of whom (Erik Ainge and Andre Woodson) were career starters who went in the draft, and 45 points higher than classmate and fellow scout favorite Matt Stafford's. Tebow had by far the best TD:INT ratio in the conference (32:6) and the best completion percentage. His average attempt went for a full two yards more than the league's number two YPA (Stafford). He was not only the best quarterback in the conference – he was the best by a mile. Run the numbers back, and he was the best of the decade. Saurian Sagacity ran them back against other H*i*m*n-winning quarterbacks in the last decade – again, only the passing stats – just to show how overwhelming Tebow’s production actually was:

That rating is phenomenal by any standard. Again, as a sophomore, and again, before his contributions to the running game are accounted for. I don’t think anyone who watched him play against Tennessee, LSU, Kentucky, Georgia, Florida State or Michigan needed all of that to understand: Tebow is the closest thing going at the moment to a force of nature, and as long as he’s in the lineup, Florida is a contender to outscore anyone.

Bow Down. Not that anyone needs any kind of convincing about the offense, the best in the SEC in total and scoring yards last year – a good 61 yards and 13 points per game better than the unit than won the mythical championship in ‘06 – and back with Percy Harvin, Cornelius Ingram and Louis Murphy and maybe even a real running back, Emmanuel Moody, at Tebow’s disposal. Phil Trautwein’s return from a medical redshirt gives them four starters back on the line. This bunch hit 45 points seven times and averaged 24 in its four losses – no questions there.

The heavy lifting in the Gators’ candidacy is on the other side: the defense was overall the school’s worst in the modern era, mainly because it was dead last in the SEC in passing yards allowed and next-to-last in pass efficiency D. That kind of thing happens when there are nine new starters and prominent members of the secondary include two true freshmen, a redshirt freshman and two true sophomores with no prior starting experience. There’s a flipside to that, of course: noobs Joe Haden (last year’s third-ranked incoming "athlete" by Rivals) and Major Wright (second-ranked incoming safety) won starting jobs immediately, took their lumps, showed a lot of the predicted promise and go into their sophomore campaigns as legit all-SEC candidates. This is an area that can and should go from weakness to strength very quickly.

As sketchy as the young DBs were, it’s easy to overlook that the front seven was a strength already – UF led the SEC against the run in both yards per game and yards per carry, and did it with a similarly fresh-faced group: the linebackers were two sophomores and a freshman, and hyped young ‘uns Jermaine Cunningham and Justin Trattou combined for 17.5 tackles for loss from the ends, mostly off the bench. Add to two alleged five-star monsters – end Carlos Dunlap, who played sparingly as a true freshman, and Omar Hunter, a 300-pound tackle out of Georgia who looks like he has to be led to the field in a Hannibal Lecter mask and straightjacket – and there is at least as much talent on the field as it should be legal for any one team to have.

Bust Out. The last time we saw all those blue chip’d recruiting stars, it wasn’t so pretty:

Among those caught in that rainstorm on a number of occasions were Haden and Wright, as well as their less heralded comrades Wondy Pierre-Louis, Jacques Rickerson and Dorien Munroe, whose respective ceilings are considered to be significantly lower. By conference standards, they’re still a good way from the middle of the pack against the pass, much less the sky high rankings that accompanied the ‘06 championship run.

The other disturbing part of that clip was the porousness of the offensive line, which was not a trend – opponents had 13 sacks all season, one per game, vastly improved from ‘06 and one of the lowest numbers in the country – but could provide a template for how to disrupt Tebow. Meyer’s scheme doesn’t waste receivers as blockers, and the other teams with the personnel to bring the heat on a consistent basis, LSU and Auburn, held the Gators to their lowest point totals of the season in losses; Georgia got to Tebow six times, almost half the entire total UF allowed for the year. It’s something that Tebow still only threw one pick in those four games (and that on a good throw that bounced off his receiver’s hands at a critical moment against LSU), but teams with the goods in the pass rush, like Miami, Tennessee and especially LSU and Georgia, will have a clear target unless Moody earns their respect.

They Burn Freshmen, Don’t They? Voters aren’t very forward-looking, as a group. Last year, plenty of polls were willing to put the Gators in the top five after their mythical championship season despite massive gaps in the lineup. There are fewer holes in this year’s depth chart, the first made up almost entirely of Meyer recruits, but the early consensus is taking a wait-and-see approach toto the alleged improvement on defense: of the five major outlets that have put out early ballots, only College Football News has Florida in the top five, at number four. None have the Gators ahead of Georgia.

The only reason for that unanimity is the way last year ended, which seems to me quite an over-reliance on momentum. With Auburn and Alabama rotating off the schedule, Tennessee breaking in a new quarterback off three straight losses to Meyer-coached teams and LSU and Miami coming to Gainesville with their own questions at quarterback, the Cocktail Party has all the makings of a winner-take-all affair, a showdown not only for the SEC East but for the conference at large and the driver’s seat position in the BCS that accompanies it. Which way you lean in that affair probably depends on whether you buy the idea that Florida’s defense is in for inevitable improvement, and that the athletes there ensure the progress will be substantial enough to keep Tebow from facing must-throw situations to keep pace against defenses coming after him out of starting blocks. Either way, I lean toward thinking the projected UGA-UF winner has a better case for the top spot than anyone else, and I don’t see why the consensus mainstream answer to that scenario so far is 'Georgia.'