The individual story of Signing Day is the the not-signing of Terrelle Pryor, who, Rivals would have you know, is not a diva or anything. He just neeeeeds... moooooorrrreeeeee.....tiiiiiiiiiiiiiiiimmmmmmmmmmeeee...

But the underrated big picture story of this year's class is the relaxation of USC's death grip on the top spot, to which the Trojans had laid claim in the opinion of one major service or another - and often all of them - five years running, back to the spectacular 2003 class that ended its tenure with as many Pac Ten championships (five) as it had regular season losses, a run that must place it among the upper echelons of the winningest recruiting classes in history (right alongside the 2002 class, which was merely a top five effort following Pete Carroll's 6-6 debut). 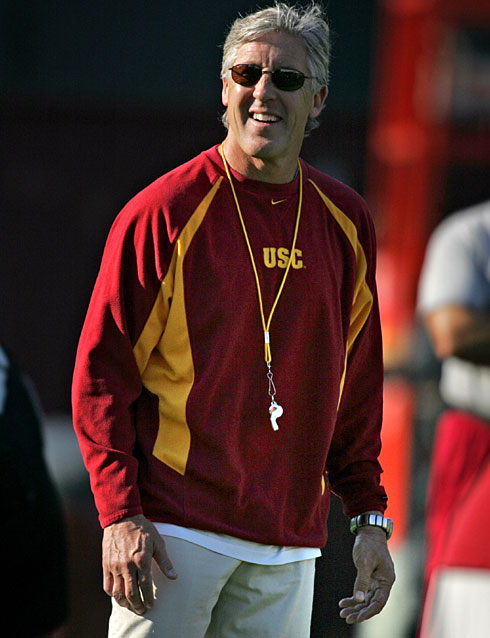 Oh my, only two five stars? Whatever is a perpetual burst of energy to do?
- - -

SC is not only not No. 1 by anyone's estimation, but it's not even in any service's top five; Scout dares to rank the incoming Trojans all the way down at 13th, and it required a pair of surprise cross-country defections Wednesday (presumed Wolverine Nick Perry from Michigan and T.J. Bryant out of Tallahassee) to boost opinions that high.

Is this half-step back further evidence of the slow dissolution of the USC dynasty? Possibly, depending on your biases, but not particularly if you take the long view: one of the reasons this class isn't one of the headline-grabbing blockbusters of the season is its small size (just 19 signees, ranking along with Pryor hopefuls Ohio State and Oregon as easily the smallest of any well-regarded group), and one of the reasons for its size is that the Trojans are way, way out in front of future classes: they've already locked down eight commitments for the class of 2009, including next year's most drooled-over quarterback, Matt Barkley. Rivals lists only a dozen early '09 commitments for the rest of its top ten teams combined: five for Ohio State, five for Georgia and one each for Michigan and Alabama.

So USC can afford to be selective with this year's crop, and among the guys it did bring in, the per-player value is still extremely high - according to Rivals' "Average Star" rating (which is not its final assessment because of variances in class size), USC brought in a 3.89, highest in the country behind Notre Dame's 3.96. So weep not for the Trojans, who from my seat still look like your recruiting daddy in the big picture.

What's really interesting is that the three schools that really racked up with this class, according to the gurus, have been among the most underachieving teams of the decade based on the talent they've accrued in the past few years. By all conventional wisdom, the consensus top three classes - those of Alabama, Notre Dame and Miami - are individually astonishing. Alabama is 13-13 the last two seasons with one win over team in the final polls, two losses to Mississippi State and another to UL-Monroe (to say nothing of six straight losses to Auburn). Notre Dame, too, is 13-13 with one win over a team in the final polls and the worst single season effort in school history (to say nothing of seven straight losses to USC). Miami is 12-14 with no wins over a team in the final polls, a wild, bench-clearing brawl to its name and a player shot to death (Bryan Pata, not Sean Taylor, the necessity for distinction speaking volumes in itself) in the same year that teammates were involved in separate non-fatal shooting incidents, and that wasn't even the season that resulted in the worst ACC record in the conference aside from Duke.

As a group, it's like the apocalypse or something:


Underlined ranks are outliers, at least five positions from the nearest rank of the same class.
"Delta" is the difference between the highest and lowest ranks of each class.
- - -

Local kids are obviously not deterred by Bama's sideways step in Saban's debut - see above, when they weren't deterred by Carroll's lackluster start at USC - or the regressive collapses in South Bend and Coral Gables; most of these guys, of course, committed in the midst of those teams' coming apart in the fall. Given the recent track record on the field, at least no basis for the argument that "the team makes the players" in these assessments.

• The SEC is still king of the guru ratings, as always, pulling in four of the consensus top six classes and putting nine different teams out of twelve on at least one top 25 list. Look at the top 20 classes above, though, and you'll see the Pac Ten has the same number of teams (five, not including Oregon just outside)  and with Virginia Tech's stronger-than-usual effort, the ACC put the same number of teams (four) as the SEC in the top sixteen. Compare that to last year, when the SEC alone put a ridiculous seven classes in Rivals' top ten. Wannstedt, eh? Where do I sign?
- - -
• Look Into My Eyes. Dave Wannstedt and Ron Zook continue to draw well-regarded talent like doomed lemurs in disproportionate numbers to their success at Pitt and Illinois, both landing top 30 classes for the third straight year despite awful overall track records. Zook, at least, has a Rose Bowl to his credit this time around; Wannstedt has yet to guide the most talented team in the Big East to its big breakthrough, or, like, a bowl game. Fellow NFL refugees Tyrone Willingham and Greg Robinson, also magnets for many more recruiting stars than wins so far at Washington and Syracuse, are in the same boat, waiting for the payoff, and it looks like another ex-pro, Tim Brewster, just climbed aboard the SS Underachieve his own self: the worst season in Minnesota history yielded its highest-ranked class of the decade, at least.

• SMQ Homerism. There is wide receiver DeAndre Brown, obviously, the highest-rated recruit in Southern Miss history by a mile (more on DB later today, hopefully), but even without Brown's five stars, Larry Fedora's first, hastily-assembled class is a relative blockbuster, according to Rivals:

Probably, then-coach Scherer was right. There's no reason to expect Southern Miss to grab a cadre of blue-chippers to play for, at best, a contender in Conference USA, in Hattiesburg  ... But it would be nice to grab one at some point. It would be nice if coaches, maybe, attempted to get some Oher-type project away from the worst operations in the SEC, rather than embracing retreads from Louisiana who invariably redshirt and sit two-three years before filling a role.
- - -

Larry Fedora overturned years of such malaise in two months. He immediately nabbed the show-stopper Jeff Bower never did, and more encouraging (because it's more sustainable), among of the kind of players that counted as the highlights of Bower's classes, Fedora brought on twice as many. This class snatched kids being sought by LSU and Michigan, obliterated the next-best effort in Conference USA and ranks unanimously as the best non-BCS crop in the country. It's so much, so fast, I'm going to spend the next year waiting for the other shoe to drop.

Of all the reasons to be optimistic about this class, the kid that excites me most is one of the rather anonymous three-star commits, JUCO DB Andre Watson. This might be purely personal - I watched Watson at Ocean Springs for two years after he moved to Mississippi from Virginia, and if he's not the best high school player I've ever followed on a consistent basis, he's easily my favorite. He was a year ahead of current LSU tight end Richard Dickson and three years ahead of Brown at OS, and Watson was a more productive, more valuable player than either of them. He was all-state as a senior, the star of the underdog state championship team that ultimately got mowed down in Jackson by the South Panola juggernaut (nice to see a couple U of Panola signees in this class, as well) and generally the kind of natural talent that took over games regardless of his size, which was the main factor in the initial lack of four-year interest.

I don't want to overstate the point, but for Southern Miss fans, Watson looks like a copy of Damion Fletcher: small but tremendously quick in tight spaces, and a much stronger runner than his stature suggests, one of those always-falling-forward kind of backs. He played against Fletcher's team in high school and was more productive in the same district; he was one of the most exciting players last year on the No. 1-ranked junior college team in the nation. That shouldn't suggest Watson's going to make an immediate impact, or even any impact, necessarily, since it's not entirely clear they know where they want him to play yet - he's listed as a DB, probably a corner, but his most likely contribution in my mind is as a kick or punt returner, because he's always been best with the ball in his hands. Or he may spend the next three years on the bench. I dunno. But I'm excited he's going to get a shot.