It Can't Happen Here, If You Don't Let It.

Share All sharing options for: It Can't Happen Here, If You Don't Let It.

One of my favorite moment in sports is, against all odds, the "deuce" in tennis. Not the physical act of hitting a flourescent ball over a net, which I find about as exciting as a city zoning meeting, or the fact that the academy that never recognized Stanley Kubrick has nominated Norbit for one its trade union awards, but the sort of competitive purity in the concept. You can't win unless you really win, by two points - no flukes, no games determined by a single sketchy bounce. A one-point difference can be a coincidence; a two-point difference is decisive. 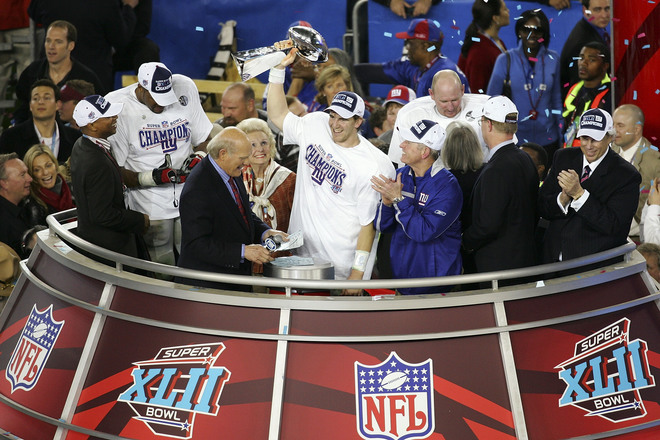 Because I talk about playoffs so much, and about the competitive necessity of a playoff to determine a "true" champion, and about just what we mean by "champion," anyway, I sometimes try to apply the certainty of the "deuce" concept to a football season, without much success. Games can't be scheduled, re-scheduled and cancelled until one team decisively breaks away; logistical necessity rejects anything like the deuce model in tennis for a football season, and ensures certain idiosyncracies and compromise will define whatever system it does embrace. Neither concession to the impossibility of perfection derails the pro-playoff argument - no matter what, nominal champion (or "championship game") by opinion poll should never be acceptable - but the Giants' victory over the previously far, far superior Patriots does shine a fat spotlight on both in a playoff context. As I've said before, a six-loss wild card team that finished three games behind the regular season champion of its own division cannot by any concept or definition prove itself superior to the team that finished the season undefeated. In the context of determining the "best" or "better" team, one game can be a fluke; one game, as we see over and over in every sport, proves nothing, especially when another game (as in the Patriots' win over the Giants in the regular season finale) directly contradicts it. A six-game difference, on the other hand, which New England brought into the Super Bowl, is decisive. Or should be.

A playoff that so clearly negates the regular season is, as Kyle King maintains, preposterous, and the NFL now has to live for the next year with the fact that its "champion" did not come close to winning its own division and finished with a substantially worse overall winning percentage even after the playoffs (.700) than four other teams (New England, Indianapolis, Dallas and Green Bay). Even if you give New York a one-game "credit" for beating three of those teams in the playoffs - thus ignoring that it also lost to the same three teams in the regular season - the Giants are at least two games back of all four.

The "hot team" argument (i.e., the undermining of the regular season) is the strongest challenge against a playoff in college football, and the lesson of the Giants' playoff run - as well as that of the Marlins, Cardinals, NC State basketball, Arizona basketball, etc. in other sports - is that the NCAA or whatever organizing body eventually takes on a bracket at the I-A level must keep the standards high. In some regards, major college football is much better situated to this sort of playoff than any other sport, because multiple losses, even as few as two or three, will be enough to eliminate most teams in a six or eight-team bracket, and whatever gap exists between the teams that do make the cut will be small enough to close in the playoff itself - I'll note again (as I did here) that college equivalent of this year's Giants, with a worse regular season record than 18.75 percent of the league, would never meet this standard; an eight-team playoff would represent only the top 6.7 percent of 120 I-A teams. There aren't enough games in the regular college season to allow one team to race that far ahead of the pack.

It's worth noting, too, that the problem of a "hot team" winning a championship is exceedingly rare: including the 2001 Patriots, who finished two games behind the vanquished Rams, the Giants are only the second Super Bowl champion in 42 years to end the year with a multi-game gap behind the league's best post-playoff record.

Still, they're an example, a warning: a playoff that wants to maintain maximum legitimacy (that is, justice, fairness, etc.) has to be selective about who it lets in. The regular season is a precious commodity; the inevitable temptations of "playoff creep" are preferable to voting for a champion, which defies the fundamental nature of competition, but the merely above average, distant division/conference runner-up doesn't deserve its place at the table. No riffraff, please.