All Aboard the Combine Coaster

Share All sharing options for: All Aboard the Combine Coaster

The NFL Draft is always something of a mystery to me as a college fan, and never moreso than in the months between the end of the season and the selection day itself, when players begin mysteriously rising and falling without actually taking a snap. Both eye-popping and brow-furrowing revisions coming out of the combine always beg the question: where were these benefits/problems in the original scouting report, the one actually based on game performance? No player is made or broken by his time in a ten-yard cone drill, whatever that is, exactly, but nagging doubts can cost the top picks millions.

If you're going to slide in the scouts' collective opinion without the benefit of another game, it's probably best it happen early in the process, so there's enough time for the conventional wisdom to run its course, recede, and break into a wave of "I don't care what he runs/says/scored on the Wonderlic/snorts off hookers, he's just a football player" backlash to ride into draft day. In a glass-half-full sort of way, then, it's good the skeptics are getting their shots in on these guys early:

Darren McFadden. It's not possible to doubt his otherwordly athleticism. Please.


Play them at the same time. They’re basically the same video.
- - -

There is no such thing in the draft as a sure thing, though, so the shot on McFadden is aimed at his "maturity," in question after the fight that sidelined him for Arkansas' opener against USC with a broken toe in 2006, the brief illegal agent flap in December and a piddling arrest for mixing it up at a piano bar last month. McFadden will be able to buy the piano bar and the rest of the block no matter what, but all maximum investments have to be picked apart without sentiment or mercy:

"There's going to be some stuff that comes out on that kid, I'm telling you," one NFL head coach said. "Just watch. People are going to project him going way up here (among the first two or three picks) and then you going to hear about his behavior and then about this and that and whatever."

Said another head coach: "He's the best skill-position player in the draft, by far. But he has issues. He's going to get a lot of questions from people, a lot of eyeballing to make sure he's being straight with people and that they can trust him."
[...]
"What that means is that not only do you have to be right with taking that player, but he better not have any issues," one of the coaches said. "You take a guy with some problems and then he slips up, you're going to hear about it for a long time."
- - -

...which has never stopped anyone where such staggering talent is concerned, with the exception of all the wary, do-gooder teams who passed on Warren Sapp...and...Randy Moss. Ahem. McFadden is barely human entity who got dat wood right hurr and won't fall out of the top five.

Andre Woodson. Woodson is a great story, the best quarterback in the SEC over the last two years and one of the most valuable players in the country. He has the size, arm strength, etc. But anybody who's ever hit "Google Image Search" on him knows the kid is a first-ballot entry to the Funky Release Hall of Fame: 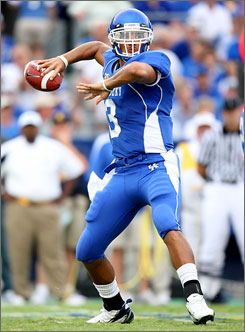 Different does not equal bad, necessarily, but when a first round pick is at stake, teams want a platonic ideal. After an iffy week at the Senior Bowl, the thinking of the moment is not only that the risk is too high for Woodson's junky windup in the first round, which once seemed assured, but that a poor combine showing might knock him out of the entire first day:

To ease scouts' concerns, however, he will need to draw attention away from his slow throwing motion with strong, accurate throws. Anything less than pinpoint accuracy in passing drills this week could send Woodson's stock tumbling into the draft's second day.
- - -
It would help if Woodson could move at all, which he can't (negative 300 yards rushing the last two years), or if, I dunno, maybe the combine staff could bring in the secondaries of Louisville, Florida, LSU and/or Florida State? They seem to bring out the best in him.

James Hardy. Hardy is a huge, strong receiver with outstanding numbers despite the near-total absence of a competent passer at Indiana, and when he declared for the draft in January, I used the projection of the site NFL Draft Scout to state confidently that Hardy "will be the first receiver off the board in April" despite his so-so speed. What does Draft Scout have to say about him now, after that bullish intro to the board? Eh:

Despite dominating Big Ten competition, at times, however, Hardy has only marginal downfield speed, which could be exposed this week in the forty-yard dash.
- - -
The same report also mentions a 2006 domestic dispute arrest between Hardy's freshman and sophomore seasons, later expunged when his girlfriend called it a misunderstanding. We knew he was kinda slow for an elite receiver in January, we knew he had a past. He was the top receiver on Draft Scout's board then; he's number eight now, and apparently destined for the second round. What changed here, other than the realization Hardy might actually put up the suspected subpar 40 time at the combine?

Jordan Dizon. Ditto Dizon, a four-year starter who led the nation in solo tackles last year and was Big 12 Defensive Player of the Year. By NFL standards, he's not big, fast or strong. He's going to bomb the combine and wind up in the fifth round:

Dizon is one of the country's most instinctive and reliable open-field tacklers - two skills that, unfortunately for him, will not translate into Combine workouts. At 6-0, 228 pounds, Dizon doesn't impress with his size or build and he isn't expected to rank highly in terms of strength or speed, either.
- - -
In other words, he has nothing measurable going for him, the kiss of death over the next two months. He's just a footbaw playa, dammit!

Who's on the other end of the stock trade? Guys who can run like a maniacal, methed-up wind: East Carolina's Chris Johnson, Penn State's Justin King and Auburn's Quentin Groves, who was slowed by injuries a lot of last year but literally, according to the scouts, runs like a cornerback - the Auburn staff has reportedly timed the 250-pound DE/OLB in the 4.4 range.

But don't take their word for it. Ask Carlton Medder and Alesana Alesana...

Yeah, it’s not just speed. He’s only a projected second-rounder, but if I was a defensive coordinator at any level, I’d be frothing at the mouth over Quentin Groves.