If Jonathan Stewart and Vernon Gholston contributed nothing else to college football in the last three years, they did at least redefine the going standard for excellence in the field of rippling, vein-popping biceps: 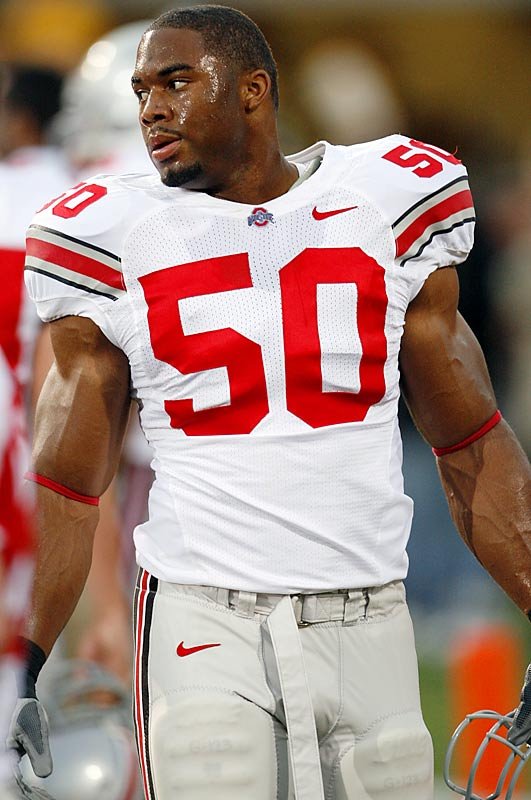 Each man is clearly just that: a man, a roaring John Henry of a man with a more fruitful outlet, and has been from the moment he arrived on campus. Stewart, especially, was a near-fully-formed gem of a prospect, nabbed by Oregon's be-swooshed mesh recuiting net out of the seedy but lucrative underground bear-wrestling circuit of backwoods Tennessee and arriving to fulfill visions of a back so thunderous and yet so fleet that, in the Ducks' ludicrous space age getup, he might seem barely human at all. This was true, at times, and could be seen as early as his first game as a freshman:

Stewart didn't play much that season and fell off the map in the second half of 2005 after a roaring start, but his presence of absence was an integral part of the offenses' success: Oregon was 9-2 over the last two seasons when he ran the ball 20 times in a game - both losses late in the year, after the crushing loss of backfield mate Dennis Dixon to an ACL injury - and 12-3 when he ran for 100 yards, niether of which happened often enough because of assorted minor injuries; UO was just 4-8 when Stewart was held under 100 yards, three of those wins against Houston, Fresno State and Portland State.

Without knowing Stewart or his commitment to self improvement, it's easy to think his dominant, 253-yard finale against a previously very good South Florida defense in the Sun Bowl was a potential turning point in his decision to leave school - as a junior, he'd been nicked and tanked along with the team over the second half of the season, and though he remained the focal point of the offense, his production had clearly taken a hit with Dixon's absence; Stewart averaged 7.1 yards per carry over the first seven games of the regular season, and 4.2 per carry over the last five, mirroring his slide as a sophomore and his team's. His talent alone virtually guaranteed a first round projection, but the strong finish individually and as part of a rejuvenated team is not such a bad way to go.

Not that Vernon Gholston would know much about great finishes, his Buckeyes having taken it on the chin in two straight, high-profile championship losses. Prior to each, though Gholston has been every bit the beefed-up terror his physique suggests:

That will make him a first round pick, and even SEC partisans (even those who will willingly forget the pair of throw-aways Gholston forced Monday night by pwning the Tigers' right tackle, the latter resulting in an intentional grounding and a sack in the books) can't accuse him of racking up stats against weak competition*: he alone piled up four of the Buckeyes' ten sacks against Wisconsin and dominated Michigan's tackles - both young Steve Schilling and certain top five pick Jake Long - en route to three sacks against Chad Henne, about which staunch Michigan chronicler Brian Cook moaned after charting every one of them:

That guy has got to be on roids.

Awful, and every minus received was because of Gholston.
- - -

Re: roids - maybe. But this is not baseball, Vernon - Congress doesn't care, and it's only a four-game suspension. If you get caught.

Also Turning Pro: Darren McFadden has made no noises about his long-assumed jump to the next level, but backfield mate/big play addict Felix Jones will hold the entire state of Arkansas hostage over the weekend until he announces his decision to stay or go Monday. Meanwhile, I'd like to know who's willing to take a chance on this guy: 6-foot 3-inch, 225 pound kicker Troy Van Blarcom of Kansas Wesleyan, who told a reporter, "School just isn't for me." The unprecedented combination of size, name, school, position and confidence to throw his name into the hat a year early despite the latter two obstacles makes him worth a sixth rounder at worst. (Note: I am aware Van Blarcom transferred to Kansas Wesleyan from USC after failing to make his grades. Don't ruin the myth).

- - -
* SEC partisans, of course, can and will say anything to foster their perceived geographical superiority. They may sound like hubris-drunk fools, but so gleefully, i's almost hard to hold it against them. Almost.