• He's Back: It didn't need him to handle Utah last week, and in all likelihood won't find hid presence absolutely essential in a comparable challenge tonight at Cincinnati, but would Oregon State like to have Sammie Stroughter back on the field? The Oregonian's John Canzano is dutifully humane about the star receiver's return - or prolonged absence, as the case may be - but, really, yeah, they want him back ASAP:

Last season, on the eve of Oregon State's victory over USC, Sammie Stroughter walked around a team meeting carrying a bag of stones, telling the story of David and Goliath.

The Beavers receiver gave each of his teammates a single stone, and on his advice, a few of them slipped the rocks into their pants girdles before the game and played the entire game with that uncomfortable David-Goliath reminder rubbing against their skin.

You know that now.

After the game, Stroughter walked around, telling anyone who would listen, "It was ordained before I was born." I scribbled that quote down on my notepad and thought, "Teammates must love having a guy like that around."
[...]
...what you don't know is that in October 2005 Stroughter came running up the tunnel after Oregon State's upset over California at Memorial Stadium, snatched the ballpoint pen from my hand, grabbed my notepad, and wrote, "Expect the unexpected!" on it.

I saved that notepad.

Well, do you believe him now?

The context for that question is the rather sudden about-face Tuesday on the star receiver's playing status after a bizarre three-week absence from practice for "grief-related issues," and word from Mike Riley Wednesday that Stroughter will play tonight against the Bearcats in a backup role as a receiver and punt returner. Minus the motivational stones, we assume, though I wouldn't rule out some kind of fatted calf-related motivation in memory of the Prodigal Son.

The fatted calf: kill me and eat me, I understand, but he wants to put me where?

Meanwhile, Riley is still pledging allegiance to the Beavers' two-quarterback scheme, which alternated starter Sean Canfield and Lyle Moevao by quarter in the 24-7 win over Utah. The flipping and flopping will be more intuitive tonight, and despite the promise that Moevao will still play, Canfield probably has a chance to lock up the job:
"Sean will start and Lyle will play, but we don't have parameters when that's going to be," Riley said Sunday afternoon. "It's going to be what we want to do at that time of the game."
- - -

Bill Walsh haunts you, Riley. Win the game on Thursday! Er...well, Tuesday, in this case. Whatever. You know what I mean: have a definite plan.

It would be a much easier job if either quarterback had played well against Utah, but Canfield and Moevao were a paltry 12 of 28 for 119 yards, two interceptions and no touchdowns in a win driven by the defense and running game. That's nothing to make a confident decision on, when the most effective part of the job is handing off to Yvenson Bernard, anyway.

• At Home With the Paternos: There's something kind of perfect and right about the opening to the New York Times' look at Penn State's Paterno Show, the one that never goes out of syndication:

Joe and Sue Paterno have not seen a movie in a theater since "Titanic" and watch so little television that they were delighted to stumble upon a show this spring that they had not seen before.

Before going on to play quarterback (and major in English Literature) at Brown, Paterno served the final year in the shit in World War II - no grisly flashbacks, we hope.

What else are the Paternos just discovering? 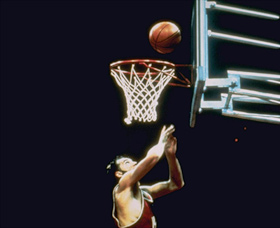 The damn Russkies got a third try in the `72 Olympics?!

For the love of god, don't tell JoPa about Bob Crane. He's an old man.

• I thought Brandon Cox was just wobbly all the time: Concussions are funny. I know this because I played football with a quarterback who was obviously concussed during the final game of his career, but was only pulled for a few plays. He re-entered the huddle and forgot the playcalls, forgot the snap count from the huddle to the line of scrimmage, forgot to tell other members of the offense he was subbing for them when coaches decided to move him to receiver instead. Hilarious. Conversations went something like this:

Concussed: I'm fine. Really. Just...did I hit him or did he hit me?

Teammates: You kinda hit each other.

Concussed: Did I hit him or did he hit me?

Yes, concussions are gut-busting events, unless you happen to be the concussed. In which case, as Brandon Cox knows well after getting his bell rung on five sacks and numerous other hits against Kansas State, which helps explain the erratic play of Auburn's offense until the closing minutes. Cox was "a little fuzzy" and "out of it" early, though he says he's just fine for Saturday, and there's this interesting note about the immediate cause of his pain:

There's a secret official film breakdown on why the sacks happened.

Let's just say the usual scapegoat - the offensive line - was not responsible for most of them. My guess: the young running backs, with veteran Brad Lester suspended, were absent in blitz pickup and chip duty - maybe part of the reason Tommy Tuberville is leaning towards playing redshirt freshman Mario Fannin. But that's only a guess.

• One week in, coaches are already eyeing the Arizona job after the `Cats' uncompetitive loss at BYU. Mike Stoops' perch may be open sooner than later if his team struggles with Northern Arizona.

Re: Arizona, I love the "Before" and "After" juxtaposition of these headlines in the Arizona Republic last weekend:

• Behind Josh Portis' indefinite ineligibility at Maryland: a student in an American Studies class at UMD told the Baltimore Sun's Heather Denich Portis copied from his paper during a quiz last Spring. That would only be, like, what, a two-game suspension in NCAA Football?

• Chicago Sun Times' Big Ten roundup: Backup running back Lance Smith won't make road games as punishment for pushing his girlfriend in a fight over cab fare in July before he "refused to let her leave his apartment and took her money and shoes," and Appalachian State gloat wear is going fast around the Ohio State campus.

One old Buckeye, at least, can sympathize with his former tormenter:
"It's easier to coach after you lose a game like that,"...former Ohio State coach [John Cooper] said of the Michigan coach's assignment this week. "He has [his players] right in the palm of his hand. The thing you have to be careful about this week is going out and beating them up - and then you lose another game.

"Kids want to win. Are you kid ding me? They can't afford to lose again. They may not be good enough [to beat Oregon this week]. But they will play a lot better."
- - -

• It's not certain, but the record number of ticket requests for Alabama's game at Vanderbilt? Might have something to do with Nick Saban.

• Hundred-yard openers, hordes of reporters wondering about a breakout year: Louis Rankin has been here before. And it hasn't been pretty.

• Terry Mixon signed with Washington State as the top JUCO safety in the country, but arrived injured, overweight - "one big from being a linebacker," per Bill Doba - and now has left the team.

• Tulsa's leading returning rusher, Courtney Tennial, is out for the season with an ankle injury. The Oklahoma transfer has played one season for the Hurricane but will have to petition for a sixth year.

• Urban Meyer wanted to use his speed in the return game, but "a little tendonitis issue" like the one he suffered through as a freshman will restrict Percy Harvin's duties to offense against Troy.

USC had another hyped running back in tow when Marc Tyler returned to practice Wednesday, "stumbling around and making mistakes," according to Pete Carroll. But at least he had fun!

Xavier Mitchell's fourth quarter injury at Cal looked like the worst, but five days later, the Tennessee defensive end was cleared for contact and could play against Southern Miss.

- - -
If you have a story for the Hub, don't be shy! E-mail it: sundaymorningqb-at-yahoo-dot-com.