Share All sharing options for: ALL UR RECRUITZ R BELONG 2 RANDY SHANNON

Not one, not two, but five native Miamians who signed with other schools in February are so impressed by Randy Shannon's work at Miami that they've called to inquire about transferring to play for Randy Shannon, according to Randy Shannon:

Though Shannon cannot mention names by NCAA rules, one, according to reports, is believed to be Florida receiver Deonte Thompson, who picked the Gators over the Hurricanes in a stunning decision last February.

Thompson, though, has yet to ask for one. When asked about Thompson's desire to leave, Florida coach Urban Meyer did not answer reporters.
- - -

Two days before that Miami Herald story appeared Wednesday, the Sun-Sentinel's Shandel Richardson was waving off the idea that Thompson might want to transfer as "way too early for that."

Prospective recruits should be watching tonight, because the `Canes' game with Texas A&M is a cruical one already for Shannon's first team. We know courtesy of Miami's first encounter with the Big 12 South that UM has no designs yet on reinstating the dominance it exhibited at the beginning of the decade, but it shouldn't be outclassed in the same way tonight by very one-dimensional Texas A&M, which will answer Miami's 113th-ranked passing the way only the nation's 107th-ranked passing attack can: by trying to shove the ball down the `Canes' throat.

This has worked against Montana State, Fresno State and UL-Monroe - TAMU is averaging a little over 296 on the ground, and Stephen McGee leads the nation at 9.1 per carry - but Miami is slightly better equipped to turn the game into a field position/punt fest until the heat generated by Shannon's sheer frustration on the sideline becomes so intense that Kyle Wright and Kirby Freeman are physically compressed into a single, terrible mutant quarterback who still short-hops quick stop routes but at least shows some awareness as a scrambler. 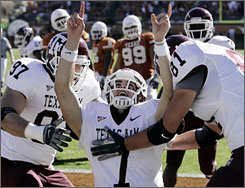 This kind of game - a slow-burning punt fest - is to Miami's advantage, I think, because as one-dimensional as A&M has been, the Aggies are still more capable of creating big plays from their running game, something Miami hasn't done. Miami hasn't created big plays from any part of its game. If you cite Wright's 224-yard game against woeful Florida International as an improvement from the first two, sub-100-yard weeks against Marshall and Oklahoma, you must also cite the two picks Wright served up to the Panthers. Against bad defenses, McGee has thrown only one pick in three games, after throwing two all of last year.

It used to be a bad idea to pick against Miami at home under any circumstances - and A&M has been a noticeably weaker road team under Franchione - but even if the `Canes manage to handle the Aggies' running game, at least there's a question about it. There is no question on the other side: Miami will struggle to move the ball, and probably will have to have help from the defense and special teams to score more than 10-14 points against a serious defense right now. That might be workable if it was opposite LSU's defense, but after Oklahoma two weeks ago, there is  that Miami's D will be able to hold up for four quarters against a running game as effective and multi-faceted as A&M's. As long as the Aggies are in a position that McGee doesn't have to throw and can keep the option and play-action games in play, it's far easier to see Miami struggling with TAMU's offensive weapons than vice versa.