Share All sharing options for: INTRODUCING THE SMQ COUNTDOWN OF RELATIVE WARMTH

This week's combustion ratings, in descending order of heat generated at 11:44 a.m...

Four years ago, the three-headed beast of USC, Oklahoma and LSU cast a spectre over the BCS that computer polls, a self-appointed championship game and nearly a half-decade of sublimely ridiculous animosity have thankfully failed to resolve. All three now are off to such blazing starts, even Dennis Dodd is anxious to ignore the next two and a half months and jump directly into the nostalgic logjam destined to tear the nation apart by December.

There is also Nick Saban apparently guiding an SEC West darkhorse into long-lamented prosperity, and the luster of early success fading into a season of eternal woe for Notre Dame's touted coaching messiah. "Hey Ya" remains catchy as hell.

After a couple seasons of on-again, off-again, alternating fireworks, Rich Rodriguez and Urban Meyer have their space age Wing T games rolling at the same time, at last, as missionaries Chase Daniel and Jake Locker spread the doctrine to far flung and far less talented lands. Considerably sullied by Charlie Weis' half-hearted, time-wasting, quarterback-screwing daliance with the hot young thing in the first half of the Irish's debacle aginst Georgia Tech, or its reputation would be pristine now.

Cozy Enough (If you go for that sort of thing): "National" High School Games 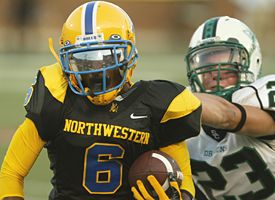 A certain segment of population - Tom Lemming, the creepy ephebophile Herbert from Family Guy - might have loved Miami Northwestern's cross-country win  over Dallas powerhouse Southlake Carroll Saturday night on ESPNU (whatever that is), but Northwestern fan Robert Andrew Powell is mortified in Slate over the increased "nationalization" and corporatization of an already wildly unregulated and corrupt enterprise. The game was open to sports books, Carroll was "exclusively sponsored" by national jewelery chain Bailey Banks & Biddle, and Powell says he witnesses Northwestern players accepting cash "all the time" from boosters and happy gamblers. One of its players, Antoine Easterling - currently toiling on the bench at my proud alma mater - was allowed to play in last year's state championship game even after administrators knew of repeated acts of statutory rape allegedly committed by Easterling in a school bathroom. The  televised game with Carroll was booked immediately afterward, shortly before Northwestern's principal was arrested and 20 other adults were fired for their inaction. Evangel Christian in Shreveport has been fined for engaging in illegal recruiting; Hoover High in Alabama has been accused of changing players' grades. Show Powell a high school football dynasty, and he'll show you something very crooked going on, and ESPN can only make it worse.

The Lukewarm Shall Be Spit Out: East Coast Referees

Having failed in their attempt to rob Virginia of a crucial field goal at North Carolina, officials up I-95 succeeded in getting the better of Temple by calling an obvious touchdown out-of-bounds on fourth down with less than a minute to play, then upheld the call on replay, thus robbing the Owls of a rare victory in a 22-17 defeat against UConn. A stunned nation expresses its outrage in meticulously orchestrated protests that strangely resemble indifference.

Dozens of teams have trotted out a "spread the coverage" theory of punting, leaving absurdly huge splits between blockers and sometimes failing to line anyone at all up on one side of the center or the other, splitting the cover team out to the sideline as gunners and leaving rushers free to attack a contingent of personal protector-style blockers who look prone to have ball booted up the wrong end of the gastrointestinal tract. Any trend along these lines - much like all change in general - is so not hot.