Why to Watch: Notre Dame at Michigan

Share All sharing options for: Why to Watch: Notre Dame at Michigan

I've said it before: God bless headline writers. They're tired people, working late, often tasked with distilling hundreds, sometimes thousands of honed, essential words in which they have no interest into an incomplete sentence that usually determines more than any other factor whether anyone will actually read those words. They're funny, sometimes unintentionally, sometimes subversively - see any headline writer who's had to describe a performance by the New York Yankees' Chien-Ming Wang (latest entry, from Monday's New York Newsday: Rodriguez backs Wang with No. 52 in Yankees' win) - and sometimes only in the eye of the beholder.

The latter is the case in this morning's South Bend Tribune, whose sports section is not such a humorous place these days, where an article by Notre Dame beat man Eric Hansen was appended to this headline:

Obviously, Weis faces adversity: after two games, his offense ranks 117th in scoring, 107th in passing and 119th in rushing offense, total offense and sacks allowed. As you know, 119th is dead last.

As for "evolution," though, what popped into my head was this:

...which initiated an entire stream of consciousness that I only reluctantly share, based on the question, "What would be the next logical step of Charlie Weis' evolution?"

It's really not a strange notion that a genius of Weis' caliber would be a pioneer in the advancement of the human species. In fiction, the early stages of human evolution were represented in mutants who learned to harneess their various superhuman abilities. Weis' ability, naturally, is a brain that already strains the bounds of his skull. Using detailed artists' reproductions from rigorous scientific inquiry, SMQ has determined an evolved Weis could emerge on the sideline in Ann Arbor Saturday looking something like this:

It could also be, though, that Weis' brain has simply outgrown the need for a body, and yearns to exist without such a needy, drooping, smelling, consuming, defecating burden, to exist as its own, independent being:

It's a role Weis' highly-developed gray matter deserves, really, and a disembodied brain free to grow expand to its full potential would be perfect in the press box. A head coach must command a certain respect on the sideline, however, and there's always the matter of locomotion. Brains are not so good for that by themselves. But you know what it is? 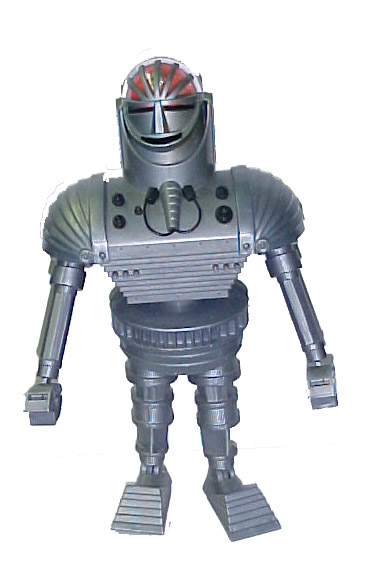 A brain-compatible bot is the perfect solution for Weis' evolution in so many ways: he is already ribbed as the "Robot Genius," we know Weis is not happy with his body, anyway, and a robot existence would allow the "head" carrying his rapidly-expanding brain to be replaced by bigger, better-fitting models. He could connect his neurons to downloadable game plans hundreds of times bigger than the puny scrawls that pass for "advanced strategy" now. It's such a great fit, it's amazing Weis' superior cognition hasn't made this leap earlier. He had all offseason with these quarterbacks and linemen. He knew it was coming.

It even creates a perfect cross-marketing tie-in for Saturday's game on ESPN on ABC, brought to you by Disney:

If you have a better hook to draw casual fans to two 0-2 teams starting true freshmen quarterbacks and young defenses still struggling with the concept of "tackling," the marketers would like to hear it. No? Then "Charlie Weis evolves past need for physical body, invents super-powered robot for independent brain and performs cameo in hit straight-to-DVD release" carries the day.