Share All sharing options for: Tuesday Hub On Thin Ice For Violation of Unspecified Blog Rules

• Sammie Stroughter Watch, Day 20: The mercurial Oregon State receiver will not play against Utah Thursday, which is about all we know at this point about his possible playing time.

The smart move, it would seem, would be to keep Stroughter in practice and redshirt him while he overcomes his personal anguish, or whatever issues he was having that kept him out of practice for two weeks, and get him back fully healthy and mentally prepared for a full season in 2008. OSU beat reporters would be eternally grateful - set the typehead now for "'Thankful' Stroughter Puts Difficult Past Behind Him" profiles next August - and this appears to be the tentative plan even as he suddenly returned to meetings and dressed out in practice over the weekend:

"I wouldn't read into it as he's playing," Riley said. "It's all up to him on his time. I'm not anticipating him playing in games this year, but I've been surprised before. It won't happen for sure for Utah."

Whose decision is it, exactly? What's the criteria for his return to the lineup? I don't think Riley has any sort of plan yet - he apparently was "thrown for a loop" by Stroughter's return, so for now he's leaving the receiver alone to practice when he wants and biding his time until a) Stroughter re-enrolls in school, which is kinda important, and b) expresses a firm commitment and desire to be a part of the team again. As it stands, it seems Stroughter's just a guy on the scout team, on his own, who comes and goes as he pleases and isn't accountable to any of the responsibilities of being a part of the team. Obviously, he can't play until he's fully back in the fold.

The Beavers' offense will be interesting Thursday, anyway, whoever steps up (or doesn't) at receiver, because Riley's stealing my NCAA Football strategy for settling a quarterback controversy:

Utah marks the grand, under-the-lights unveiling of Riley's (so far) two-quarterback system that has left-hander Sean Canfield starting the first quarter and right-hander Lyle Moevao coming on in the second quarter. Riley said the coaches will decide at halftime if they split up the rest of the game or go with one guy. (emphasis in original)

In fairness, this shouldn't be all that unfamiliar for the offense...Matt Moore was usually a different player from one quarter to the next, too. Zing!

• The New York Times discovers the reality of playing running back at USC, via position coach Todd McNair: it's possible for a sixth-string tailback to stay at U.S.C., not start a game and still be drafted into the NFL: 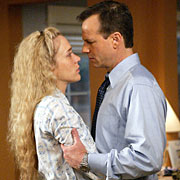 USC's starting tailback: one alternately happy, paranoid, legally suspect dude. Who should dump Chloe Sevigny (seriously, man, this character is not going there. Give it up).
- - -
"We've got 10 of them," said Todd McNair, the running backs coach. "And we've only got one football. It's like the TV show 'Big Love.' There's only one dude."
That dude will not be Joe McKnight, not Saturday, at least, though the freaky freshman was cleared to run Monday and said he doesn't feel rusty after a two-week layoff (sprained knee). He still hasn't been cleared for contact. It won't be Chauncey Washington, either, who's being held out until the Nebraska game with a shoulder injury. So they'll just have to settle for Stafon Johnson, C.J. Gable, Allen Bradford, Broderick Green and Desmond Reed. Sigh...

Another of those Trojan backs is out the door, as you know by now: promising Emmanuel Moody is headed to Florida after some initial noise about winding up at Oklahoma State - the OSU backfield is currently and will still be pretty crowded itself next year - with the strange idea of becoming a "feature back," as he explains here in a generic interview I offer mainly as a test for the Leader's new video embed features:

• We Loved You, Man: Keith Harrison's suspension from Arkansas remains "indefinite" after his arrest Friday for ecstasy possession, but Houston Nutt and fellow starters Jonathan Luigs and Materral Richardson are already referring to the defensive tackle in the past tense.

• Ignoring the appeals of Blake Mitchell and his dad, "Nugget," South Carolina upheld the quarterback's suspension for USC's opener with UL-Lafayette. Chris Smelley will start instead, and hopefully try out a little Right Guard for a change, huh?

Hendricks, Dinwiddie, Zabransky - now Taylor Tharp is finally somebody at Boise State.
- - -
• Interesting situation at Penn State, where starting tight end Anthony Quarless has been suspended for the opener against Florida International, along with backup DB Willie Harriott, after both were cited last week for the extremely minor crime of underage drinking. This would be a footnote if the respective fates of Anthony Scirrotto and Chris Baker - both still facing serious felony charges from the April apartment fracas and awaiting trial in October - weren't still in the air for the same game. Consistency, JoPa, consistency.

• Nick Saban has suspended starters Prince Hall and Keith Brown for `Bama's opener Saturday, a "one-game deal" in response to unspecified rules violations. Whatever will the Tide do without two veteran stalwarts against Western Carolina?

• Bret Bielema clarifies in no uncertain terms: defensive end Jamal Cooper is suspended indefinitely from Wisconsin for unspecified "conduct detrimental to the team," a death knell for a fifth-year senior. Bielema also drops this, regarding the ambiguity of a release on Cooper and subsequent correction: his girlfriend is an English teacher. And something of a nag, apparently...

• Auburn's shuffled offensive line "looked awful" Sunday, like it was starting over. That tends to happen with two freshmen holding down the right side.

• Five-foot-nine Danny Woodhead, who set the NCAA record for rushing yards in a season last year for D-II Chadron State, opened 2007 Saturday by rushing for 290 yards and four touchdowns, one of them an 89-yarder. It was his 18th career 200-yard game.

Woodhead: Who's laughing now, sixth-grade bullies? Huh? Who's laughing now?
- - -
• Arizona may be the "right place at the right time" for Sonny Dykes to earn his playcalling chops, but probably not for very long.

• Les Miles, Sandbagger: Mississippi State had a chance to win against LSU? Only if you're coaching LSU, and holding your tongue for a change. In that case, it was inevitable.

• Karl Dorrell's made it five years at UCLA, "as shocking a sports accomplishment in the L.A. area as anything else" T.J. Simers has seen in that span.

• Sometime-safety Josh Pinkard is making "dominant plays" at corner and apparently will displace Cary Harris as the starter against Idaho. And attention Syracuse: one of Washington's starting corners Saturday will be a true freshman after his competition for the job, walk-on Cory Nicol, quit the team over the weekend.

• Gasp! No fullback on the Michigan depth chart? What is this, Purdue?

• Iowa's four days from kicking off and two linemen short of a full offensive line. Two freshmen and two sophomores are still competing for the vacant spots up front. At least the Hawkeyes are cashing some checks by playing Northern Illinois in Chicago.

• Comcast's battle with the Big Ten Network trickles down: because the cable giant expects the network "to encourage Comcast customers to disconnect their service in favor of DirecTV, which is owned by the parent company of Fox," it's begun pulling its sponsorship of anything and everything related to the Big Ten or its vaunted member institutions. First victim: a Minnesota "kickoff luncheon" hosted by the St. Paul Area Chamber of Commerce.

• Click here to take the Columbus Dispatch's Ohio State football quiz. Warning: I got two out of ten. Don't cast a vote for anyone you've ever heard of.

• Limas Sweed is ready to play earlier than expected from his wrist injury - not that he needs two hands, anyway.

• Starting cornerback Markihe Anderson might miss Florida's opener with a sprained knee. No biggie there if he does - Western Kentucky might be Florida's worst opener in 20 years - but it's one less game the sophomore will have before Tennessee comes in.

• Starting Michigan State left tackle Mike Gyetvai has been practicing but will miss Saturday's opener against UAB and could be out up to a month with a lingering shoulder injury.

• Arrelious Benn - am I seriously expected to substitute "Rejus" for this all-time gem of a first name? - was "full go" at Illinois practice Monday and will play Saturday against Missouri.

• Backup running back Pat Perry is out for the year with a hip injury sustained during San Jose State practice Sunday. Perry led SJSU with seven rushing touchdowns last year.

Arrested, East Carolina quarterback Rob Kass, who was stopped by police at a checkpoint early Saturday morning and charged with DWI. (Hat tip: The Wiz) Kass, a huge (6-4, 247 pounds) third-year sophomore, was expecting cheers in addition to pain and humiliating turnovers as ECU's starter Saturday at Virginia Tech, and Skip Holtz hasn't ruled that out – "I've visited with Rob, but at this point I'm not ready to address it publicly," etc. – but there was reportedly very little separation between he and backup Bret Clay in the competition. The lesson, as always: Avoid checkpoints, Rob! Turn around and speed in the opposite direction, sober or not, insured or not, up-to-date stickers or not. No good can come of an unsolicited encounter with the authorities.

Pled, not guily, to "shouting, cussing and challenging passengers (of a sport utility vehicle) to fight him" last weekend, Alabama cornerback Simeon Castille, who claims he was only "joking with teammates" when he was arrested - seriously, handcuffed and booked into jail - for disorderly conduct, i.e., yelling outside a club.