I was asked to discuss the SEC on a national radio show last week, and admid whatever other shallow mumbling I emitted trying to qualify the expectations of a dozen teams in 20 minutes, one thing I said struck my stunned host as "actually good analysis." That would be an almost incidental aside on the weird dynamic this season in the SEC East, where the historic (that’s very recent history, Mr. Mayor, like the last 10-15 years) and yet again consensus big three, Florida, Georgia and Tennessee, all have a slew of new starters, and the corresponding personnel questions that inevitably accompany them. The perennial underlings, though, South Carolina, Kentucky and Vanderbilt, have almost no questions in their lineups; everybody’s back on both sides.

Simply looking at returning starters tells us this, but even that obscures the vast experience gap between the nominal haves and desparate have-nots (and, yes, South Carolina, wild expectations notwithstanding, until y’all win the division, or at least finish better than third two years in a row, you remain in the "have-not" category). "Retruning starters," after all, is a small number, fluid and open to interpretation – how many starts does a guy have to have to qualify, anyway, and what about backups who rotated in regularly and contributed as much as some starters? – so how much difference is there between Kentucky’s sixteen returning starters and Georgia’s eleven? Doesn’t look like much.


* - Phil Steele’s own experience rating, based on starters and depth by class. Just to make this like a totally legit footnote, it’s on page 311 of this year’s national annual. By Steele’s standards, Florida is the youngest team in the country.
- - - 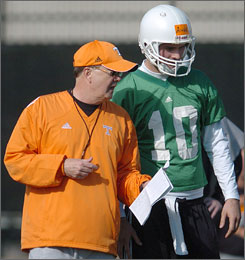 Remember: talk slow. You’re surrounded by infants.
- - -
One reason for the huge differences here is that the poorer-performing teams have been more dissatisfied with their first-line guys, and rotated more players into it. But an awful lot of the returning starters for Carolina, UK and Vandy are going into their third year in that role, about twice as many between them as between the big three.

In any given year, you might see one traditionally strong team poised for a rebuilding year at the top of a conference and one team with the production back to make a run at a bowl, or, in this case, where two of the bottom three were already in bowls last year, cracking the top three and contending for a game in January. Never, though, do I remember this trend representing the entire "top half" of a division in such contrast with the bottom. This makes for an interesting question, and a dangerous one for prognosticators: how much does the gap close between top and bottom?

To be clear, we are talking about a fluid gap: Vanderbilt and Kentucky both beat Georgia last year, Vandy beat Tennessee in 2005 and played Florida into overtime, South Carolina lost on Jarvis’ Moss finger tips last year in the Swamp after beating the Gators and Tennessee in ‘05. Kentucky and South Carolina both won eight games last year, including bowls. So the concept of one of that three – this year, Carolina is obviously something of a chic pick, even if overall expectations still see it as the East’s fourth team – overcoming the talent chasm to earn a winning conference record, and one of the powerhouses slipping briefly among the plebes, is a semi-annual ritual, like a 12 seed beating a 5 in the basketball tournament. Which one will it be?

But all three of the underlings turning the established order on its head? Unheard of. So much so that I’m dismissing the notion outright, even while holding out some hope for the utter anarchy a realistic insurgency along those lines might create. If ever there was a chance, even a long one, for a Carolina, Kentucky or Vandy as we still know it to steal the division, Wake Forest style, or at least put a massive scare into the power brokers, this has to be it. In the current cycle of program strength, weakness and turnover, the gap between the two sides isn’t going to get any smaller than it is now.