Coaches are a quirky sort as rule, which you internalize pretty quickly when you grow up around them. On all levels, they're men of contradictions: obsessive, restless, disdainful of unwashed plebeian criticism yet chronically brooding and indecisive, second-guessing, whose attention to detail clashes with their ultimate lack of control to form a unique set of neuroses. With much wisdom and experience, it comes to look like this: 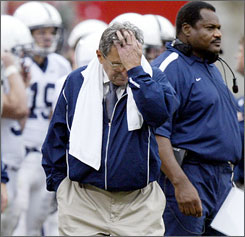 Every coach, for example, is a well-known paranoiac on the broad subject of special teams, but less obvious under that umbrella of potential disaster is the twitch they develop in relation to the kickoff team, specifically. Not only is it made up of younger and/or less capable athletes with a fatal tendency to drift out of their lanes, but the faces seem to grow younger, stupider, more reckless and less capable of tackling anyone - much less the opposition's best athletes, in the open field - as the always shocking, always devastating disasters accumulate and blur together through the years. Coaches' stomachs gurgle and churn in bed for weeks before the first game, they fret, swear, are ostracized by family members, all over the dementia wrought by the futility of the kickoff team. Because this is the one, he's sure, this year's unit will finally be the one that kills him.

So understand where crusty Rich Brooks is coming from when, in response to kickoffs being moved back five yards this year to facilitate more returns, he says the hell with it:

"It's going to be one of the most significant rule changes to come about in recent years, maybe in a decade," Kentucky coach Rich Brooks says.
[...]
"You're going to see scoring averages go up because of this rule change," said Brooks. "You're going to see a lot more gimmicks on kickoff coverage -- pooch kicking, possible squib kicking. There may be some people that decide they want to kick it out of bounds and give it to the team on the 35-yard line rather than kicking it deep and having a return out to the 40 or 45."

At least Brooks is more confident in his 118th-ranked defense.
- - -
Other coaches fully expect to be driven crazy by returns beginning at the nine instead of the four: Mark Richt guesses the change might add ten or 15 yards to average field position, not just five, and Ron Prince thinks teams should either a) fill coverage teams with more starters or b) plan to defend shorter fields beginning at the 40 or 50. That means both coaches foresee at least a 50 to 60 percent increase to the roughly 20-yard average that's held for two and a half decades. Auburn practiced kickoffs last year "maybe five minutes a week," which will grow exponentially since Tommy Tuberville now considers the Tigers' vaunted "left sideline" tactic, responsible for the SEC's best cover unit last year, untenable under the new conditions.

But actually covering more kickoffs in competent fashion? Have you seen those kids trying to run down the field? It's going to be a bloodbath out there.