Share All sharing options for: Big 12 Week: Underlying Literary Themes in the Big 12

The Individual In Society
Society and a person's inner nature are always at war.
In society, stereotypes exist as a necessary shortcut to assessing individuals when possibly distinguishing subtleties aren't deemed to be worth the time or effort of examination. Stereotypers are often stereotyped themselves as small-minded, disrespectful and/or bigoted, but snap judgments based on immediately obvious qualities are part of a highly evolved survival instinct that continues to serve man well. That might be an eloquent, generous member of the Pachycrocuta genus of giant short-faced hyenas, but those who gave it the benefit of the doubt were too often cruelly selected out. That shady character in a ski mask may in reality be an attractive actor innocently huffing Febreze, (or, I dunno, Dwight Yoakam) or might be UCLA's new wide receivers coach. Best keep your distance in any case.

In the same way, no coach who ever gave the eyeball test to Henry Melton or Jorvorskie Lane could ever assume "running back." In modern Big 12 society, the average starting tailback averages 196 pounds, and only two of them this year - Nebraska's Marlon Lucky and J.J. Bass at Iowa State, both 210 - are over 200 pounds. Two hundred seventy-five-pound individuals such as Lane and Melton are defensive tackles or, if they're really quick, ends; both, in fact, are heavier than any starting defensive end in the conference. 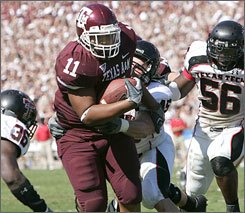 Wrap up the J-Train? Fools!
- - -
Melton knows the sting of the pigeonhole all too well, his career as a ball-carrying oddity cut short to facilitate a move to, yes, defensive end, where he is only the second-largest in the Big 12 at his position (Nebraska's Zach Potter edges Melton at 280). This, after all, whatever young Henry's ambitions, is society's place for people like him. Occasionally, though, through perseverance, an individual's true talents are honored - such is the case for Lane, whose running back inspired the climatic "humble origins" monologue by the snobby food critic in the summer hit Ratatouille* in his praise for Lane's emergence as the number one rushing option for the Aggies as a sophomore. Certainly Jorvorskie became the heaviest player (274 pounds, conservatively, on a six-foot frame) in NCAA history to score 19 touchdowns in a season. Melton, often maligned as a dancer, tried at the worst possible moments to be the kind of running back he was not, to fit society's model of a running back, and finds himself now no running back at all. But Lane, Lane on the other hand has never aspired to be anything other than his bulky, punishing self. To hell with society's perception of a tailback; it shall be ground to dust.

Still, he struggles behind the ordinarily-proportioned Mike Goodson to shed the "short-yardage" label, despite averaging 4.6 per carry with five 100-yard games in two years. Someday, perhaps, such barriers in perception will cease to exist. And when that day comes, it will only be because determined people like Jorvorskie Lane leaned on them so, um, heavily.

An Individual's Relation to the Gods
The gods are jealous of and constantly thwarts human aspiration to power and knowledge
Initially, the gods merely mocked Guy Morriss by directing him to a difficult but not impossible test in Kentucky. He couldn't go to a bowl there, due to the god (read: NCAA)-baiting hubris of his towel-bearing predecessor, but with patience, success might have been his eventually. But his men, his crew, they were foolish. Inexperienced. Adrift in the foreign sea of success. Whatever analogy one wishes to draw, even when one is seconds from a stirring come-from-behind upset of the defending conference champion to extend one's record to 6-2, even when the bowels of one's fans are hemorraghing in their zeal to consecrate the field with the traditional felling of the uprights, one must never, never douse the captain before victory is in the bag, wrapped tightly and properly sealed, lest it be unleashed to mischief like the winds of Aeolus:

Morriss' Bears started 4-1 in 2005, for example, and entered the fourth quarter at Nebraska within a touchdown of a major upset, a larger upset, even, than the agonizing loss to LSU three years earlier. But some mercurial instinct - a divine revelation, perhaps - motivated Morriss to pull starter Shawn Bell for Terrance Parks, who threw two interceptions down the stretch. BU lost to the Huskers then, and in two overtimes to Oklahoma the following week, and would eventually drop five straight en route to another losing record. As 5-6 was an improvement, though, it still seemed possible that, sitting at 4-4 through the first two-thirds of last season, his team having won three of its first four conference games - already eclipsing the school's previous single-season best of two Big 12 wins - the sands were finally running out on Morriss' time in purgatory. Bell to that point had averaged a Big 12-best 300 yards on the season with a 2:1 touchdown-interception ratio. But the gods? Cruel: down 24-21 to Texas A&M with four minutes remaining in the ninth game, an elusive winning record at stake, Bell's season abruptly ended on a third down hit by A&M's Alton Dixon. And so went its quarterback, so went Baylor: the Aggies immediately scored an icing touchdown, and the Bears' last three games under the guidance of backup Blake Szymanski were disastrous blowouts by a combined deficit of 102 points.

And so Morriss forges ahead in his sentence with not only the least skilled personnel in the Big 12, but also its least experienced - a mere 11 starters return. Some of them may have to be sacrificed.

Human Relations
Parents should not sacrifice all for a better life for their children.
It took Colorado more than a month to score two touchdowns in a game last year, and all year to actually win its second game. The culprit was the worst passing offense by far in the Big 12, and nearly the worst in America, one that completed well below 50 percent of passes in a majority of its games and that failed to reach 100 yards in another five. Converted running back Bernard Jackson, not surprisingly, usually represented a much greater threat as a runner than as a passer, sometimes actually gaining more as a runner despite rarely running the option, and even his improvement in the final month of the season (4 TD, 0 INT in November) couldn't dam the raging flood of Dan Hawkins' genes after such a performance.

If you could only see the desire in his son's eyes the way Dan Hawkins does, and his linemen's willingness to hold, you'd start Cody, too.
- - -
In many ways, Hawkins is sacrificing his son for his own benefit as much as for young Cody's: CU's passing was not only historically bad, its offensive line was abysmal in '06, and almost literally non-existant this spring. Jackson, one of the country's most elusive quarterbacks, was sacked two and a half times per game, more than all but two other Big 12 QBs. But Cody has a dream, a desire welling inside him since he first began reviewing tapes of his thrashings of fellow adolescent Idahoans, a dream to emulate Chris Leak's success as a sub-six-foot starting quarterback in the offense daddy took to near-unprecedented heights at Boise State. And who is Dan Hawkins, or Bernard Jackson, for that matter, to deny that dream? What father doesn't want better for his son? What coach doesn't want better for his program? Considering both son and team redshirted last year, starting Cody can't be anything but a win-win, from the goal-oriented perspective.

Alienation
Through isolation comes self-knowledge.
Mike Leach grew up in Wyoming. This is true. Picture a small Mike in the woods, in the shadows of the goalposts at Cody High, wondering how to harness the power of the shadow in his groundbreaking experiments with local ants. He majored in "American Studies" at BYU, not because he was a Mormon himself, but because he was interested. He didn't play football. Went to law school at Pepperdine. Hung around. Hung ten. Earned his Master's of Sports Science and Coaching at the renowned U.S. Sports Academy in Daphne, Alabama, which recently awarded an honorary doctoral degree to the president of East Timor, Kay Rala Xanana Gusmão, quite probably on Leach's suggestion. His first head coaching job, after a year at the College of the Desert, was of a semi-pro team in Pori, Finland, the kind of place where American football players have been known to be called "Hitler Youth" by those with long memories. The kind of place where football orthodoxy doesn't exist. He came to the SEC and then the Big 12 from Iowa Wesleyan and Valdosta State. Mike Leach, in other words, has spent his career largely isolated from the orthodox football establishment.

And what isolation hath wrought: possibly the most innovative, adventurous, persistently curious, disarmingly eccentric, subversive and consistently prolific offensive coaches. In the age of rapid trends, clinics, copy-catting and endless second-guessing, he who knows himself first is most at peace.

- - -
*-Completely unrelated to football: a friend of mine conceived a sequel to Ratatouille, called Roachatouille, wherein an abitious Luxembourgian cockroach who desperately, passionately wants to fulfill his calling to become a dentist pursues his dreams by crawling into people's mouths as they sleep to work on their teeth. The CGI will be unbelievable - viewers will be amazed to see every imperceptible nick on every taste bud as the protagonist heeds the humid call of destiny on his hairy insect legs. Eventually the roach propels a young, hapless dental student to success by nibbling on exposed nerve endings in one of his host's cavities to improbably guide him past the dental exam and into the hottest practice in town, where the kid becomes a dental star and bags the jaded but equally passionate hygienist. A lot of laughs, a lot of soul-searching and several dozen cans of Raid later, the roach is finally granted an honorary DDS by the American Dental Association (whose authority extends across the Atlantic, oddly enough). At its worst, I think this is at least as hilarious - and certainly less disgusting - as a rat honored for getting Plague all over fine food.