The Consensus: West Virginia Will Beat Louisville for the Big East Title

Share All sharing options for: The Consensus: West Virginia Will Beat Louisville for the Big East Title

What everybody believes this summer, non-obvious division.

Technically, the Big East championship equation should properly include much-fawned-over risers South Florida and especially Rutgers, the latter being ranked - rather rashly, I'd say - as high as tenth this preseason, and in at least one case (Athlon) ahead of Louisville. But the great chorus breaks in favor another WVU-Louisville horse race, the result each of the Cardinals' first two seasons in the league, and unanimously bets on a Pat Slaton-inspired victory by a neck.

Injuries to QB White and RB Slaton limited the Mountaineers at the end of last year and if they remain healthy this year the sky is the limit as they have my #4 rated offense and a schedule that could have them favored in all 12.
[...]
The key to this pick is that they host Louisville, and even if they slip up at one of those tough road spots, they would hold a tie-breaker over the Cards if they beat them at home.

For the third consecutive season, West Virginia has the talent - and the schedule - to win the Big East, finish undefeated and qualify for the national championship game. Defensive issues, especially against the pass, have caused the Mountaineers to stub their toes in recent pursuit of those goals, but coaches believe they have addressed the problem and are now capable of finishing the job.

"I'm never sorry that there are expectations for Mountaineer football," [Rich Rodriguez] said. "There should be expectations when you've worked to build a program up and have some success.

"We have a lot of players coming back from what was an excellent team last year, so it's only natural that people know about us."

With seven starters back on offense and seven more returning on defense, plus a manageable non-conference schedule, WVU is again in position to contend not only for a Big East championship, but to make a run at the BCS title game.

The West Virginia program is on a roll. Back-to-back postseason wins at the Sugar Bowl and Gator Bowl. Slaton and White back in the fold. And this season the Mountaineers have Big East nemesis Louisville in Morgantown.

"Three power teams once again in Louisville, West Virginia and Rutgers, with Louisville having the best chance to come out of that group and contend for the national championship."

Turns out I was mostly justified in my consistent Mountaineer-bashing last summer, when I was the only person I know of besides Phil Steele who thought Louisville would be the real Big East beast instead; I imagined West Virginia, a program that had never finished ranked in consecutive seasons, would lose to the Cards and another, less worthy upstart and fall to the Gator Bowl, and I can claim presience across the board.

I was wrong, though, about the level of play WVU would carry over offensively from the dominant run at the end of '05, declaring last year "sophomore slump time for Pat White all the way" and doubting such a "one-dimensional" attack here could really reprise its late season role as "some '95 Nebraska, run-for-280-at-will steamroller." The Mountaineers actually ran for 303, on well over six and a half per carry, which is basically at-will. So my skepticism of their championship viability, and of the durability of White and Slaton's star power, vanished around the time I came home in September to a first quarter score of West Virginia 28, upset threat Maryland 0.

That opinion won't change as long as White and Slaton are in the lineup, and maybe as long as Rich Rodriguez is content in Appalachia if he's going to be bringing in Noel Devine-type skill on a regular basis (there are good hints with his de rigeur offense that major backfield talent is paying attention). That TSN line, though - "For the third consecutive season, West Virginia has the talent..." - might be getting a bit ahead of itself. WVU is still a very new power (two years ago, entering 2005, no one picked it to come anywhere the Big East title or the top 25; it was "trying to maintain rather than ascend," according to the same TSN that now lauds the talent of that team), and subsequently not necessarily a very deep one. Devine comes in as the highest rated player by far on the roster, challenged only by Slaton's blue chip classmate, Jason Gwaltney, who is becoming irrelevant, but with the defense falling into a hole of mediocrity against winning teams over the second half of last season, the championship talent on display has been almost exclusively that of White and Slaton, who are irreplacable for any extended period. And also of the offensive line, naturally, which deserves parades for the current upswing but which also lost its two most valuable assets in all-America center Dan Mozes and position coach Rick Trickett. The point being that, athletically, anyway, West Virginia isn't far enough removed from being blasted by Virginia in the Continental Tire Bowl to automatically preclude a return there with some routine, ill-timed calamity in a rapidly improving conference. The talent that separates the Mountaineers from the rest of the Big East, and that therefore makes them mythical championshiop contenders, is disproportionately confined to its offensive backfield and to Rich Rodriguez's skull. 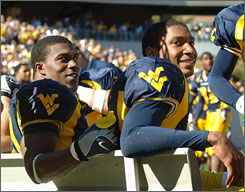 "Sophomore slump." Yes, I wrote it. Thank you for reminding me. Please resume duly acknowleged awesomeness.
- - -

All that was my point last year, too, though, and completely underestimated the spread option's ongoing potency. It's best saved for the sorrowful departure of White and Slaton after another likely championship run in 2008, and the competition in this case hasn't been hanging around the top ten much longer, anyway. These teams are such interesting mirrors. Louisville has the passing equivalent of West Virginia's unstoppable option, its own Heisman-contending quarterback and a completely intact receiving corps that Steele thinks will be back over 40 points per game this year if Brian Brohm stays healthy. The Cards have comparable defensive returns and even their own blue chip discipline/academic risk a la Devine, infamous Miami transfer Willie Williams at linebacker. The WVU-UL game in Morgantown in `05 went to triplle overtime after a disputed onside kick call; on a dozen drives apiece last year, WVU's offense scored 35 points on five touchdowns, Louisville's 30 poins on three touchdowns and three field goals. The difference was Steve Slaton's bum hand, which gave Louisville's defense an easy score, and the Mountaineer punt team, which immediately gave UL the backbreaker on one of the two possessions the Mountaineer offense was actually stopped all night - WVU ran for 318 yards and outgained Louisville 540-468. As different as the teams are, across the board, they're equals.

The slightly greater enthusiasm for the Mountaineers has two possible explainations, one of them recounted several times above (Louisville plays at Morgantown, at night, about which West Virginia fans apparently feel the same as LSU fans, except inhumanly cold, and with John Denver substituted for Tiger Rag) and one that's surprisingly not mentioned as much of an obstacle at all: Steve Kragthorpe's assumption of the Louisville coaching job. TSN even goes so far as to say

The easygoing Kragthorpe, who resurrected the Tulsa program before his arrival at Louisville, will be a breath of fresh air for many players who had grown tired of the always high-strung Bobby Petrino.

Kragthorpe's ability to frustrate opponents with no talent at his disposal is well-documented here, and he maintained continuity on the offense by promoting Brian's brother and most recent position coach, Jeff, to co-coordinator with his own man, Charlie Stubbs, and on the defense by keeping Petrino's man, Mike Cassity. There is about as much concern for Louisville's coaching transition as there is in Morgantown over Trickett's move to Florida State.