Hershel Dennis Rages, Rages Against the Dying of the Light

Share All sharing options for: Hershel Dennis Rages, Rages Against the Dying of the Light

Pretty much anything you read about USC this offseason focuses on its ridiculous, probably unprecedented cadre of backfield VHTs, and rightly so. To recap, in addition to the recent transfer of the nation's third top-ranked quarterback prospect in four years, using the post-Spring roster and Phil Steele's handy amalgamated recruiting rankings:

The ratings for the incoming freshmen are approximated from Rivals' list, and not included is senior Desmond Reed, who was lowly PS #45 as a DB coming in, or sophomore fullback Stanley Havili (PS #39), whose injury helped kill the power running game last year. It was no surprise that injuries and inexperience - the three primary backs were all newcomers, either as true freshmen (Gable and Moody) or a finally-in-line academic latecomer (Washington) - made the SC running game a mediocrity in `06, but even with an unusually harsh 75 percent bust/injury/bonehead rate, there remain at least two first-rate talents in tow at any given time.

That, of course, is not news. But L.A. Post beat guy Scott Wolf, apparently coming across a few "veteran" Trojans out at dinner last week, did come up with something of an insider scoop on their opinion of who'll eventually emerge as the feature guy. The blazing Gable? The slashing Moody? The consistent Washington? One of the noobs?

A group of veteran USC players went out to dinner a few nights ago and were asked who would start at tailback this season. Their answer: Hershel Dennis. 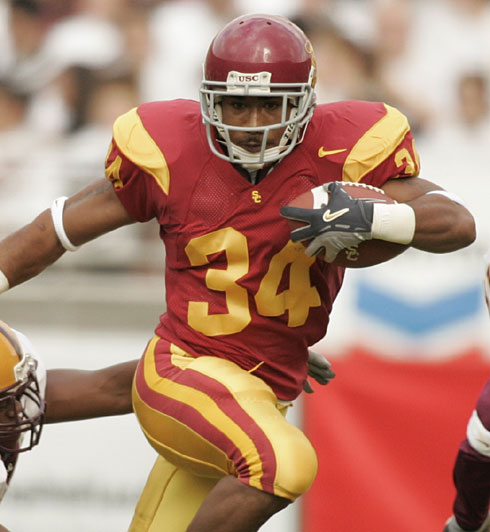 Dennis: Just running, is all.
- - -
Now, Wolfe points out the possible biases of loyalty among the upperclassmen to a fellow traveller, and Dennis his own self was a top ten recruit out of powerhouse Long Beach Poly High who outran Reggie Bush as a redshirt freshman on the `03 co-mythical championship team. He had a strong Spring, and his name's come up in this horse race before. Where the end of his college football career is concerned, though, dark is surely right: Bush and LenDale White kept a banged-up Dennis mostly on the bench in 2004, at the end of which he tore ligaments in his left knee and missed all of 2005, after which he returned to blow out the same knee last Spring and miss all of 2006. Sixth years of eligibility are designed for Hershel Dennis' situation, but then, so are transfer rules. The odds of a guy with two debilitating injuries to the same crucial joint, who in September will have gone nearly three full years without participating in a game, who realistically should have "unlucky has-been" stamped on his bio and maybe a pro audition or two before putting that sociology degree to use, beating out more than a half dozen younger guys with expectations on par with the stars who first beat him out three years ago, are long, to say the least.

But forge on, Mssr. Dennis, rage ahead, for the Rockies and Oakland-era Jerry Rices and would-be washed up old men everywhere. You were USC before USC was cool, when Nelly was only beginning to get a skosh warm in herre and Pete Carroll was just another overcaffeinated, 6-6 NFL retread off a 10-6 loss to Utah in the Las Vegas Bowl (and with abs of unknown definition). Lace up ya Air Force Ones and show these bandwagon whippersnappers how old school Trojans represent (uh, not that Old School Trojan).