Share All sharing options for: Wednesday Hub is a Big Geronimo Guy Going Through a Napoleon Phase

Out the rest of today, so let's cheat a little with some Mike Leach before the news:

George Washington, grizzly bears, Black Beard flags, fast food on national radio. He is who we thought he was. 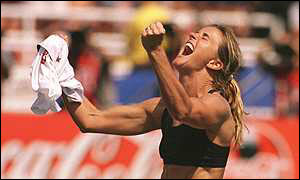 Charged, with driving under the influence of liquor, Auburn linebacker Jacob Shirley, a walk-on. Shirley was arrested early Tuesday morning in a routine traffic stop, the second Auburn player in ten days arrested in an alcohol-related incident and the fourth in the last year. Shocking, shocking behavior. Two last year, Trey Blackmon and Montae Pitts, missed games as a result of Tommy Tuberville's zero tolerance policy.

Urged, to "behave," Georgia's entire team on the heels of freshman Akeem Hebron's second arrest for underage possession in three months last weekend. Mark Richt called on his older players at a team meeting Monday to "mentor" underclassmen, who he thinks are responsible for most of the team's transgressions (forgetting Daniel Inman? - ed.). Hebron is probably done, per the university's discipline policy, until 2008, but what about an NFL-style, SEC-wide policy?

"There are certain things you can have a policy for, but there are certain things you can't," Richt said. "That was one of the first things [I saw] when I got to Georgia -- there is no book that you can open up and say, 'OK this guy does this and this guy does this; this is what you have to do about it.' ... A lot of how we handle things is a player's attitude toward what happened."

Cleared, of NCAA violations, South Florida's Matt Grothe, who was cited for serving alcohol to an underage customer at the just-off-campus sports bar, the "Bull Ring," where he worked even though the USF athletic department  had no idea its star quarterback, underage his own self at 20, was moonlighting at such an establishment. That's the university's assessment, of course, not the Association's, so take it for what it's worth.