Tuesday Hub Is A Little Creeped Out

Share All sharing options for: Tuesday Hub Is A Little Creeped Out

• How Much Is That Coach In the Window? The One With the Irritable Bowel? The Pennsylvania Supreme Court listened Monday to arguments advocating public disclosure of salaries of Penn State employees, including Joe Paterno. The university is "state-related," and gets about ten percent of its $3 billion budget from the legislature, but Paterno and PSU's top administrators are also enrolled in the state's employee retirement plan.

How much money does Joe Paterno make? Let's just say he's not pulling the lever for Kucinich.
- - -
Who wants to know? Some pesky journalist, naturally. No indication which way the court is leaning, or whether Paterno's salary is some potentially shocking figure that could reorder the pay scale nationwide. Or, like, paid in brains.

• Consensus in Arkansas! Both sides of the pending lawsuit against top university administrators are cool with the judge assigned to the case, despite his Razorback ties. The inspiring first step in an unlikely reconciliation? Not bloody likely.

• For Walter Thomas, the Biggest (XXXXXXXL) Disappointment: This actually belongs more on the pro side of things, but some of you might remember rural junior college specimen Walter Thomas, he of the New York Times-profile and salivating projections of physical absurdity. Well, uh, forget him:

Walter Thomas, a 6-foot-4, 374-pound defensive lineman who had startled scouts with his quickness and agility, didn't even make it through one practice before Payton sent him packing. 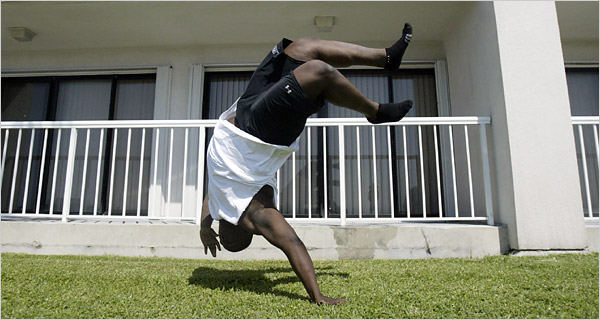 Very nice, but too tired to do it twice.
- - -
"He had a brief career," Payton said Sunday in his first meetings with reporters during the Saints' three-day rookie camp.

Payton said Thomas needed to visit the training room for treatment after nearly 15 minutes of the first practice on Saturday. (Emphasis added)

Nearly 15 minutes. I would like to think, with some will power, personal pride and the understanding of the stakes, I could go for half an hour before collapsing into the trainer's room. Maybe a pipe dream, but if it was my career, I think I could set my mind past 15 minutes. So this is not exactly a staggering loss.

• We Must Move Swiftly to Crush the Amputee Threat: Still straying from college football, on the complete opposite end of the athletic spectrum from Walter Thomas, the Times wrote Monday about South African sprinter Oscar Pistorus, the fastest man on no legs:

Pistorius wants to be the first amputee runner to compete in the Olympics. But despite his ascendance, he is facing resistance from track and field’s world governing body, which is seeking to bar him on the grounds that the technology of his prosthetics may give him an unfair advantage over sprinters using their natural legs.

His first strides were choppy Sunday, a necessary accommodation to sprinting on a pair of j-shaped blades made of carbon fiber and known as Cheetahs. Pistorius was born without the fibula in his lower legs and with other defects in his feet. He had both legs amputated below the knee when he was 11 months old. At 20, his coach says, he is like a five-speed engine with no second gear.

Yet Pistorius is also a searing talent who has begun erasing the lines between abled and disabled, raising philosophical questions: What should an athlete look like? Where should limits be placed on technology to balance fair play with the right to compete? Would the nature of sport be altered if athletes using artificial limbs could run faster or jump higher than the best athletes using their natural limbs?

For now this is still academic where football is concerned, but maybe not for long, if the technology continues to improve. It's certainly not academic in Pistorius' case: he's smashing Paralympic records and finished second in the 400 meters last year against able-bodied competition in the South African national championships.

Backlash: we're introduced to the term "techno-doping," and officials opposing the technology while pondering a "device where people can fly with something on their back," and then back-backlash from a therapist who says the artificial limbs don't nearly match the utility or strength of a human leg. The rules say a foot has to be in contact with the starting block. So what counts as a foot?

From Pistorius' own description, it doesn't sound like his specific case offers him any advantage, mainly because it takes him 30 meters to get into a rhythm. Down the line, I would suspect sprinting and later other sports will have to adopt NASCAR-like guidelines for the limits of allowable technological advancement in this vein. But my larger question, directed at readers who oppose steroid use for competitive reasons: is there an appreciable difference in the artificial enhancement to natural physical limitations gained by Pistorius via his prosthetics and the artificial enhancement to natural physical limitations gained by an athlete using steroids? Prohibitionists on the latter point, I would think, would have to also be prohibitionists on the former.

As someone who's refused to draw a prohibitive distinction between the chemical alterations for competitive gain achieved by steroids and the chemical alterations for competitive gain achieved by weightlifting and nutrition, though (a point on which I'm hardly alone), I don't think that cuts both ways – the potential for technological advantage is more bothersome, and doesn't have a viable precedent for performance-enhancing comparison until the eventual introduction of Flubber or the Wile E. Coyote-style rocket skates. I don't have a firm opinion, except to say if you think Todd Marinovich's dad wouldn't have amputated his son's arm and installed some sort of slingshot if he thought it would help him better throw a football, you are underestimating man's competitive spirit.

Quickly: The NCAA's APR faces a "wall of fire" when penalties explode over the next two years, according to the beloved Knight Commission ... Jim Harbaugh sparks a minor identity crisis at Michigan ... Another award for Ray Ray McElrathbey ... Arkansas defensive linemen will celebrate July 4 as "Freedom From Healing Day" ... Add Tampa to the hunt for the ACC Championship Game ... Everybody's talking about Georgia Tech's new quarterback, but what about Tashard Choice? ... And Clausen teammate/USC uber-recruit Marc Tyler ran for the first time Monday since breaking his leg in November.

No doubt fearing the rhetorical wrath of "The Rap Sheet," players continued Monday helping little old ladies across the street, or studying for finals, or whatever, or just taking extraordinary lengths to cover the tracks their minor criminal misdeeds. We all do what we can here.