The first thing we get from Michael Silver's plan of attack on the "No Snitchin'" policy Reggie Bush has adopted re: accepting cash and prizes from a wannabe agent while at USC is some possibly interesting new information in the NCAA's case:

Pac-10 associate commissioner Ron Barker, a former NCAA investigator who now has a similar role with the conference, said Thursday he believes the truth about the improper and benefits allegedly received by Bush and members of his family will be uncovered.

"This case is a long, long way from being over," Barker said. "There is a lot of information being gathered that I can't speak about. We've had some interesting things happen in the last two weeks that have put some new life into this."

The unprofessional guess is that Barker's not refering there to DNA evidence, and whoever came forward best be travelling with his head on the proverbial swivel - Bush is heartless, insidious, a new breed of cold: even the parties that have "turned against each other" have been wholly uncooperative on a level Barker said he's never encountered. "I've never had a problem getting the information in the past." But how many times in the past has the investigation proceeded outside of the university and athletic department, against a player in a position to subsequently afford silence?

But then, Silver - making some familiar sounds about equitability, the notion of competitive balance, and why this case matters - has his own plan to put some teeth in the NCAA's crippling lack of subpoena power:

If Bush remains uncooperative -- and last month, while visiting a Trojans football practice, Bush brazenly told the Los Angeles Times that if he were called by NCAA investigators, "I wouldn't answer the phone" -- here's what should happen: His charmed existence as USC football star emeritus should be instantly and mercilessly revoked.

No more visits to practice or the Coliseum sidelines, or anywhere else on campus. No more inclusion in the record books or media guides or promotional materials like football-highlights DVDs. Unless and until Bush agrees to an interview with NCAA investigators, he ceases to exist in the annals of school or NCAA lore.
[...]
I'm modeling my plan on the "implied consent" laws that are on the books in most states -- rules designed to discourage drunk-driving suspects from refusing to take roadside breathalyzer tests. In California, for example, anyone who is pulled over under the suspicion of driving while intoxicated and won't submit to a test automatically loses his or her drivers license for a year.

This is not a legal matter -- that's for the courts to handle on a concurrent basis. Rather, it's an administrative action, based on the DMV's premise that driving is a privilege, not a right.
[...]
[his plan] certainly seems preferable to the toothless system we have now. Consider that, according to Yahoo!'s most recent report, even the existence of audio tapes which may implicate Bush and his family members isn't enough to keep him away from the Trojans' practice field.

That is pretty close to this...

When the actual government wants someone to talk in a criminal prosecution, it holds the individual in contempt and denies them most of the rights of a free citizen until they spill their guts or until the prosecution gives up for whatever reason. Witholding information is a crime in itself. What is the risk to the NCAA of doing the same thing, meting out minor probation or scholarship penalties for schools that don't show some effort to cooperate with the Association's version of a prosecution, or striking eligibility to players who won't come forward? 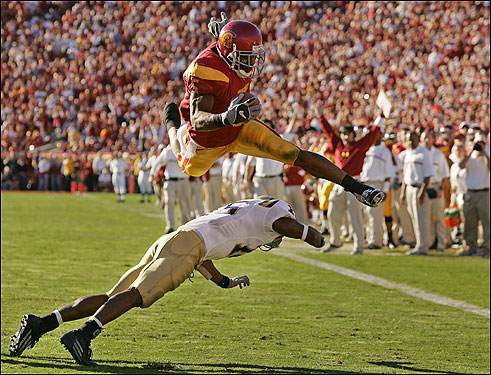 UCLA, NCAA - just a bunch of easily-hurdled letters in the way of Reggie Bush and what Reggie Bush wants.
- - -
... the difference being that Silver's hypothetical power play focuses on the offending player, and my version goes after the institution that potentially enabled him in the "contempt of court" tradition. They have in common the principle theme of institutional authority and enforcement power in a chaotic world where decisions must be based on the assumption everyone will cheat if given the opportunity, as well as the distinction of being hopelessly, untenably pie-in-the-sky in the service of draconian Association authoritarianism. Just as the erudite D.C. Trojan pointed out the inevitability of lawsuits from the first put-upon institution, Barker shoots down Silver's individual targeting:
"It would have to be approved by the entire (NCAA) membership," he said, "and I think it would be a long shot. Most of the people want to give the benefit of the doubt to the student athlete, and without overwhelming proof they probably wouldn't want to (take such drastic measures)."

So barring the fruition of "interesting things, new life," etc. Barker hinted to at the top, Bush will continue to skate. What a model for undercutting the system: pimp your pro prospects, take the cash (scratch my back now, I'll scratch your down the line...), keep it quiet, mind the paper trail, pay for tight lips - or, if we're talking agents, you know, just acquire services - from NFL millions. Suffer from bad reputation, maybe, about which, like Joan Jett and the Blackhearts, he don't give a damn. Nor, apparently, does USC. If there wasn't exactly orchestration here from the start, there's no incentive yet for an enterprising young athlete not to take advantage of the precedent that's emerged from the NCAA's ongoing toothlessness in the face of very simple and very profitable silence. Quite the innovator, that Bush, even when he's not trying.