An Absurdly Premature Assessment of: Cincinnati

Share All sharing options for: An Absurdly Premature Assessment of: Cincinnati

A random, too-soon look at next fall, sans the inevitable injuries, suspensions and other pratfalls of the too-long interim.
- - -

The least you should know about Cincinnati...
Alright, wise guy, it's Cincinatti and SMQ knows what you came to see, but we're keeping it clean and PG here today, folks...PG-13...

What's Changed: Cincinnati's base offense under Mark Dantonio and Don Treadwell still listed a starting fullback last year, who Central Michigan import Brian Kelly will make quick work of relegating to short-yardage packages. Kelly's offenses at CMU took a run-oriented system with a run-oriented quarterback and increased per game passing from 175 to 226 his first season, 260 in 2005 and 245 with phemon-ish, from-nowhere redshirt freshman Dan LeFevour last year, dramatically increasing completion percentage and scoring in the latter case en route to the shcool's first MAC championship since the stodgier days of 1994. Kelly won't stand for stodgy, in part because he's possibly out of his mind, but in larger part because he believes in the pursuit of the jugular: his teams escaped from three-win purgatory by setting the school's single-season attempts record two straight seasons, throwing the ball more than any team in the MAC last year and doing things like trying to extend a desperate game-tying drive at Boston College by lining up in the swinging gate on fourth down. That failed miserably, but Cincinnati can use the attitude - UC has averaged 17.5 and 21 points in two inconsistent, turnover-filled, quarterback-flopping years post-Giudugli and was next-to-last (ahead of only Syracuse) in the Big East in scoring offense, again.

What's the Same: More than a third of the eventual starting defense in 2005 was made up of freshman, and another three were sophomores, so the results were a very kitten-like 400 yards and 31 points per game allowed and not very surprising. This is why, if they're underclassmen, you want ten starters back on one side of the ball, no matter how bad they were last year:

Remember whenever dealing with any Big East defense that nobody in the league's current incarnation can throw except Louisville (and occasionally Pittsburgh), but the only area the Bearcats didn't significantly improve with age, though they were clearly better on third down overall, was when faced with third-and-short. Good as tackle Terrill Byrd was credited with being in 2006 (first team all-Big East), this indicates he was tougher as conference newcomer of the year in `05:

Green (percentage below the national average, repped by the thick black line) is good for Cincinnati - opponents only converted about 58 percent of third downs with 1-3 yards to go, well below the norm of about 68 percent. They only made 12 first downs on 26 runs in such situations. The youngsters were horrible everywhere else.

As opposed to last year:

We have the polar opposite: better than average on most third downs, but slightly worse on short yardage, and much worse than in `05.

How do we reconcile that with the overall improvement? We could minimize the all-defining importance of third-and-short defense, which would not necessarily be wrong, or we can try this:

Dat's a lotta third and tens dere. About twice as many as faced by the 2005 defense, in fact, which you may verify here. The veteran group, besides creating more turnovers, got offenses off the field by keeping them in more long-yardage situations.

Anyway, the point is, nine defensive primaries return, seven of them entering their third year as starters and four having been honored as either first or second team all-conference one of the last two years. This should be a fairly tough unit that might even get around to holding Louisville or West Virginia under 400 yards. Maybe.

What's a guy gotta do to secure a starting job aorund here, anyway? Throw more touchdowns than interceptions or something? Oh.
- - -

I Just Flew In From a Quarterback Duel and Boy Are My Arms Tired: There has to be a lot of excitement about spreading the field with receivers Derrick Stewart, Dominick Goodman and possible tight end convert Earnest Jackson, who had a combined 90 catches in'06, but there's the buzz buzz of another quarterback controversy. Technically, one could say, if one were so inclined (as one is wont to be), the fraternal battle was won each of the last two seasons by freshman/sophomore Dustin Grutza over junior/senior Nick Davila, but Grutza's only apparent advantage was his youth and subsequent future prospects. He matched his 11 touchdowns with 11 interceptions as a freshman and fell to 9:13 last year; Davila, meanwhile, had 12 scores to five picks in the same span, completed a higher percentage of passes and, in the only game he quarterbacked start to finish, led a defining 30-11 romp over previously undefeated Rutgers last November.

So where Grutza comes back as "the guy" Cincy fans will be familiar with, the "other guy" this time is Ben Mauk, the catapult-armed refugee from Wake Forest whose season-ending injury facilitated the unholy rise of Riley Skinner in Wake's ACC title run. Mauk's been lurking at Spring practice during his week off from Wake. Since the Ryan Smith Rule was revoked, SMQ has no idea why Mauk doesn't have to sit out a year. He does remember the heave Mauk launched on his first collegiate play, a freshmen-will-be-freshmen bomb for a touchdown at Clemson, but he's only had three since then, to ten interceptions, and never held down a starting job before he lost for the season in last year's opener. He is a pretty good athlete, more reminiscent of the multi-talented skills that made Kelly's offense so dangerous with LeFevour last year. The head coach says this:

Whatever else happens, at least he got the returning quarterback's name right.

Ah, dammit: the school's investigation into poorly-spelled allegations of a thoroughly debauched, multi-party sex tape starring four football recruits and a former UC soccer player ended last month with the suspension of an unnamed player accused of lying about a teammate's involvement. After all the libidinous hype in this case, it comes down to, by all appearances to university judicial director Daniel Cummins in this memo, an exagerration or flat lie from the inital letter alerting the athletic department. Or, at least, that's what they want you to think:

The football player at first told UC football coach Brian Kelly that he and a UC recruit had sex with a female student. He also told officials that he had no connection to the allegations raised in the anonymous letter. He later said he lied, Cummins' memo noted.

The female student told Cummins that she "could not remember any details regarding" the sexual incident and signed a statement asking thatthe matter not be investigated.

"We were unable to substantiate the allegations stated in the letter or to secure a copy of any videotape of sexual activity," Cummins wrote

If you want to know who the suspended player is, just watch closely and note who doesn't play in the `Cats' first three games. Yeah, that guy. He's your man.

See also: Circa 2002, weekly offensive line camaraderie over steaks at Doolin's Diner; Take the field and holler and jump around with UC fans after the Bearcats' upset of Rutgers; one of a series of offbeat segments for the UC television show "Mix on Mainstreet" concerning serial killers and motivational running films. This one is actually more competent than it has any right to be. Well, oil painting liked it. 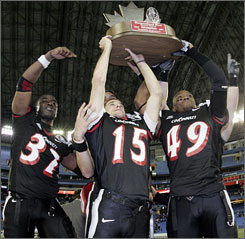 The International Bowl: So nice, you'll want to win it twice.
- - -

Best-Case: This is a pretty rough schedule, relatively, the kind that's bound to get a lot of could be improved but the record won't show it kind of analysis. Four presumptive defeats: Ohio State, Virginia Tech, Louisville and West Virginia. Toss-ups, per the emrging Big East norm, are Rutgers, Pittsburgh and South Florida. If someone settles in at quarterback and the defense holds its billing or continues its upward trend, the Bearcats can win two of the latter and finish 7-5, again, with about the same postseason hopes.

Worst-Case: An ill-fitting or batty quarterback, a defensive reversion, a rejection of the coaching transplant - hair triggers all to a string of middling Big East defeat. Given that Cincinnati has not at any point recently or extending into the distant past put enough distance between itself and the dregs to keep Akron, Syracuse and UConn from thinking "winnable game," much less their aforementioned middle-of-the-pack colleagues, it could get very 2005 in the form of 4-8 5-7.

Non-Binding Forecast: For a team that won eight, led Virginia Tech on the road in the fourth quarter, played Louisville on the road within a field goal, shut down South Florida, hammered Rutgers, won a bowl game, gets a rising young coach and returns just about everybody, capping the season at seven regular season wins seems, I dunno, harsh. But, barring a breakthrough upset at Va. Tech or against Louisville - again, teams a team that struggled very long with Cincy last year - there you are. After four previous 7-5 or 7-6 seasons this decade, it ought to feel like home by now. A second straight winning season in as balanced a conference as the Big East has become these days, under a different coach, should be a satisfying statement in itself.

Update [2007-4-6 4:14:6 by SMQ]: The original analysis of the schedule was based on pulling up last year's slate and assuming repeat engagements, a horrible mistake pointed out by reader Matt. The Bearcats' non-conference lineup this fall is Oregon State, Miami of Ohio, San Diego State, Marshall and I-AA Southeast Missouri State. Keeping with the 4-3 conference projection, smells like an eight-win season to SMQ. Sorry for the mix-up.