Thursday Hub Discovers the Dark Side, Wonders: Why Can't the BCS Be More Like Calvin Johnson?

Share All sharing options for: Thursday Hub Discovers the Dark Side, Wonders: Why Can't the BCS Be More Like Calvin Johnson?

• BCS Version 5.1 Best Of All Possible Systems! "Some interest in alternative models" at the annual Bowl Championship Series meetings in New Orleans, according to SEC and BCS commish Mike Slive in the New York Times, but "no discussion" of alternatives as the party disbanded Wednesday. This year's formula will be identical to the last two years: Coaches Poll rank plus the percentage of Coaches Poll votes plus the Harris Interactive Poll rank plus the percentage of Harris Poll votes plus the average of the middle four of six computer polls, discarding the highest and lowest machine rankings, plus the percetage of computer poll averages as determined by assigning points in an inverse order of ranking from 1-25, all averaged together for the final number, rounded to the nearest ten thousandth of one percent. Should we discuss the different computer formulas, or are we clear? I have, like, all day.

Playoff advocates like myself should be heartened by Slive's implication that "alternatives would probably discussed" by the eleven D-IA conference heads and Notre Dame's athletic director at next year's meeting in Miami, though the model specifically mentioned by the Times is the "Plus One" abomination, designed to ensure, extend and maximize controversy - the only BCS years an extra, post-bowl championship has made any sense are 2003 (LSU and USC) and 2004 (Auburn and USC). The other seven seasons have each ended with an undisputed number one, all unbeaten before Florida's upset in January.  I don't recall anyone clamoring for a Florida-Ohio State, Texas-USC or Miami-Ohio State rematch. But if the "Plus One" is the Homo ergaster to the fifth game's H. habilis in our tortuous evolution to a rational, modern playoff, and it's the workable option on the table, let's just get on with the lower Pleistocene already and select this analogy into extinction. 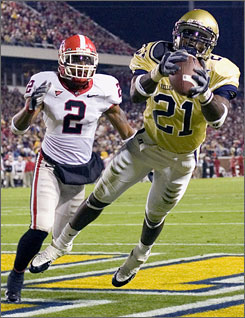 • Calvin Johnson, Draft God: The Times also fills the Northeastern liberal media elite in on what the rest of us already knew: nobody's thought of a knock on Calvin Johnson. On his play, on his attitude, on his work ethic, on his consistency, on his background. Probably on his parallel parking, off the record. The whole profile is disgusting with coach drool. It's an interesting background for a top draft pick, too, one that sheds some light on his much publicized third-world latrine project. Johnson's father is a railroad conductor, his mother a "model teacher" in Atlanta public schools who singlehandedly nixed her son's baseball career, his sister in medical school and hoping to break into cancer research. That's not exactly an engagement to A.J. Hawk, but let's not get carried away. None of them, his dad says, have ever been particularly athletic. Except, well, obviously.

Whoever drafts Johnson, he's already locked in to Nike.

• The Dark Side Doesn't Want Your Money...It Wants Your Hard Drive! The University of Arkansas and sane people everywhere characterize John David Terry's lawsuit against UA's chancellor and president as "frivolous," but the 42-year-old Montgomery Countian might get exactly what he wants out of his "taxpayer action" before a judge kicks it to the curb: sworn testimony from Houston Nutt.

LITTLE ROCK -- Arkansas football coach Houston Nutt has been subpoenaed as part of a lawsuit brought by a Montgomery County
resident over an e-mail one of Nutt's family friends sent former Razorback Mitch Mustain.
[...]
The subpoena also includes a list of materials for Nutt to turn over, including computer hard drives, documents, phone records and notes of telephone conversations. Freeland said he believes exposing Nutt to this type of discovery process is the primary motivation behind the lawsuit.
(Emphasis mine)

Odds of Nutt actually providing testimony, much less handing over "materials": slim and none, according to his lawya, Byron Freeland, who expects the university to successfully file for dismissal before the May 14 deposition date set by the subpoena. Terry's attorney, Eddie Christian Jr., claims merit based on "waste of taxpayer money" due to university employees' failure to perform "contractual obligations" in investigating the e-mail. Whatever.

I came across a message board post with its own categorization of litigious malcontents, magnifying glass-wielding FOIA investigators and the rest of the mounting psychosis among the anti-Nutt crusade: "Darksiders." Which I will now permanently appropriate, as in:

An Arkansas darksider firebombed HDN's office while wearing a swaddle made of pages from "The Hurry-Up, No Huddle: An Offensive Philosophy."

Don't think they haven't reached the fork to that road.

• Big Media Crush Alert! Aditi Kinkhabwala has a perfectly interesting SI.com feature on "quirky" and perpetually unsuccessful Tulane Stanford Dartmouth head coach Buddy Teevens' crazy cross-country bike ride, but really, I can't get past Kinkhabwala's striking, Catherine Bell-but-exotic-and-younger-ish mug shot. Where'd she come from? Dartmouth's Ivy rival Cornell, apparently, and a few newspapers, but her SI archive goes back more than a year. As far as I can tell, this is her first effort in college football, which is probably why I've never noticed her before. So I don't know if she's a better writer than Stewart Mandel or what, but I demand a hi-res, hotlinkable image of Aditi replace his mug on SI's college page immediately. Who's with me?

• Quickly: Florida State poster boy Myron Rolle goes international, while star classmate Brandon Warren plans to appeal FSU's block on his transfer to Tennessee Friday ... Alabama starters D.J. Hall and B.J. Stabler have undergone successful surgery since the end of Spring, and 473,598 attend Saban Coaching Clinic ... A "groundswell of enthusiasm" has Texas State looking to move up to the Bowl Subdivision, less than ten years after the same effort failed financially. The Bobcats would have to sell out or expand 15,228-seat Bobcat Stadium to meet minimum attendance requirements ... Maryland reveals plans for luxury suites in Byrd Stadium by 2010 ... Tulsa's Skelly Stadium will become Skelly Field at H.A. Chapman Stadium ... Do you know your Georgia draft history? ... Justin Harrell's bicep is fine and he's flying up draft boards ... Jabs at Florida State and at his own offense - vintage Spurrier ... Oft-injured USC running back Michael Coleman can read the writing on the wall. He's out ... Hooray for contract extensions: Oregon State wraps up Mike Riley through 2012, unless he loses before then  ... And yet another Ferentz en route to Iowa, which will keep the boss there, too. But what's with the hair?

Paterno leads his team into court.
- - -

Wrapped up, State College police's investigation into the infamous April 1 fight that could bring assault, burglary and/or trespassing charges against as many as six Penn State football players when names are released Friday. Police said 15 to 18 players may have shown up at an apartment party, but instead of "recklessly charging everyone who was there" are focusing only on those who busted into the apartment to beat up two people inside, one of whom was knocked unconscious. Someone was allegedly hit with a beer bottle and a laptop was destroyed. No idea why charges weren't filed already, but we'll know more Friday.

JoPa reacts: What, who knows with the fighting and the kids and the rapping? I know nuttink.

Also from the Post-Gazette: PSU receiver James McDonald has been suspended until June, but we don't know what's behind that, either.

Dropped, by Williamson County, marijuana charges against departing Texas cornerback Tarrell Brown, who was apparently in a "wrong place, wrong time" situation in his cousin's SUV during a traffic stop in March. Thanks for waiting a month, until, like, a day before the draft for that absolution, guys.