All I'm saying is you coulda robbed banks, sold dope, stole your grandmother's pension check and none of us would have minded. But shaving points off football games? Man, that's un-American. - Caretaker
- - -

Add to that list of pardonable sins a lot of other routine collegiate trangressions, bar fights and the like; SMQ generally is not a stickler for everyday fun gone awry when no one really gets hurt, but this? This we cannot tolerate, even until Monday following a busy weekend, and the U.S. District Court in Detroit apparently agrees:

A running back for the University of Toledo Rockets has been charged with recruiting fellow athletes to shave points and fix games on behalf of a Macomb County gambler.

A criminal complaint filed in U.S. District Court in Detroit said the player, Harvey "Scooter" McDougle Jr., 22, a senior, recruited football and basketball players to participate in the scheme spearheaded by a Sterling Heights man identified only as "Gary."

Gary's recruitment of players allegedly included inviting the athletes to gamble and dine at Greektown Casino in Detroit.

McDougle told the FBI that he received a car, telephone and other things of value from Gary, but insisted that he never changed the way he played to affect the outcome of games.

No comments or denials from anyone at Toledo or McDougal himself, who the Free Press said was scheduled to appear in court sometime today. No other Toledo football or basketball players have been implicated, as far as the paper can discern, and there is no evidence any games were thrown. The ringleader "Gary," it says, is identified only as "an Iraqi male," and was investigated via wiretap from October 2005 - the Rockets had the best record in the MAC that season, though technically were second in the West Division - until last December. He met the players in a local cell phone store, and the complaint cited here says McDougal and "other Toledo players" were either spotted or recorded with Gary at Greektown Casino in Detroit in December 2005. Again, no indication who those players were or if they will be charged. All we can ascertain is that they were pretty confident of their ability to yo-yo the final score: 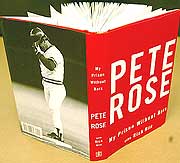 Toledo just finished its first losing season in twelve years, but it would be impossible to tie that to McDougal, unless he convinced teammates to throw games (UT fans may have already suspected quarterbacks Clint Cochran and Aaron Opelt) or unless a long term ACL injury was part of the scheme - Scooter led the Rockets in rushing in 2004 but only played in five games over the last two years.

A lot of valuables may have changed hands here, as McDougal is said to have admitted, but there is the casino issue, as well, which makes less sense. SMQ understands all too well how tight money can be in college, and that Toledo is not exactly the most glamourous locale for a young man of some ability and ambition, but he also grew up and has worked in or around largely casino-based economies, and he can't imagine the cigarette-and-semen-stained carpet* of a VIP room in any venue being worth the risk, not only of prison time, but of the inherent seediness in the worst sports-specific crime yet perpetrated outside of the continued employment of Bill Raftery. Casinos, in fact, rather than an incentive, seem generally like the kind of dank places uncooperative clients should be forcibly held by bookies. Lots of sagging, depression, fetid fabric, broke and broken people desperate and driven mad by tiny flashing lights and increasingly foolish gambles, which is essentially SMQ's mental picture of Detroit at large outside of the casino (though he imagines Motown at least doesn't water down its drinks on the street). Scooter could have joined Tom Amstutz any night of the week for a hearty meal and conversation at the Ryan's Steakhouse buffet - as long as the coach doesn't pay, of course - and who wouldn't enjoy such wholesome company? Why risk your future for preferential treatment at a seedy den of thieves*?

- - -
* - Maybe, maybe not, but the high probability and/or perception of the presence of these foul materials is what's important. All casinos, by definition, are seedy, in the same way all accused persons must be considered innocent until proven guilty. Insert 'allegedly' above where necessary.