The least you should know about the Las Vegas Bowl...

The fifth edition of an ongoing public service to enlighten readers of their bowl viewing options... 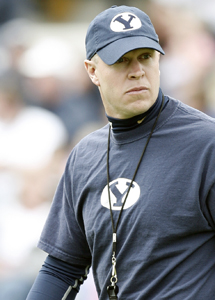 Catch Bronco at BYU while you still can.

Tune in for: BYU has been hidden away in the Mountain West's squirrely TV package, toiling away for tiny regional audiences on the likes of mtn and Versus and therefore is probably the best team that's lived its season in near-total obscurity. Positive facts about BYU: the Cougars have won 16 straight and 21 of their last 22 Mountain West games under Bronco Mendenhall, who will be hired away by a major, needy Pac Ten or Big 12 school sooner rather than later - and who likely rebuffed UCLA in its search earlier this month - topped 300 yards per game passing for the third straight season despite a new quarterback and, offensive acclaim notwithstanding, finished in the top 15 for the second straight season in scoring defense, and were ninth nationally against the run. Average margin of victory in MWC games: 14.9. BYU is a very solid team - a very solid program - that deserves some eyeballs for a change.

Turn away in disgust when: There are a few big differences between tonight's matchup and the one that resulted in a 27-17 UCLA win in the Rose Bowl (the stadium, not the game, duh) way back in the second week of the season. Fifteen differences, to be specific:

The walking wounded have lost four of five since seemingly salvaging their season against Cal, only beating a similarly doomed Oregon outfit, post-Dixon, in possibly the ugliest offensive game in Pac Ten history, and in fact look very much like the shell-shocked, halfhearted Ducks that limped in to take a sound, virtuous beating from BYU in Vegas last year. The Bruins are without their coach and their top two quarterbacks, which leaves converted receiver Osaar Rasshan under center,  last seen going 0-for-7 with an interception before being pulled in the aforementioned loss to the Ducks, two weeks after going 3-for-10 in the loss to Arizona. It's either him or the Walk-on of Horror who flubbed away the Notre Dame game. Top rusher Kahlil Bell? Out since October. Top receiver Marcus Everett? Out since October. Top run stuffer Kevin Brown? Out with a bum ankle. L.A., literally, barely has a leg left to stand on.

What Else is On
You have no life. But that doesn't mean you can't enjoy these actual non-gridiron alternatives:

HBO2e • 9 p.m. ET • Big Love - "Roberta's Funeral" (60 mins.)
Bill visits Juniper Creek for the funeral of his father's first wife, and to propose a deal to Roman; Barb helps Nicki out of a tricky situation at Home Plus; Lois seeks to improve her standing in the compound. (TV-MA)
- - -

SMQ Watchability Rating: All bowl games are rated on a scale of one TV ("Christmas shopping done? Yes? Think of more people. Phone book suggested if necessary.") to five ("Block out a few hours - and possibly the sun, if there's a glare - for this can't-miss classic.") based on completely subjective factors, up to and including potential cheerleader hotness/fulfillment of requisite nubile teen lust fantasies, which are so sadly lacking anywhere else on contemporary television or the Internet.

BYU is worth a look, just for the sake of equal opportunity air time, and UCLA has had a knack under Dorrell - as flat as they've fallen with the ball rolling in their favor - for pulling out stunners when the chips are down. Although, technically, they're not under Dorrell anymore, so whatever bizarre bipolarism they exhibit in the process of exorcising five years of inconsistent demons will be worth a glance.

Worth an afternoon or evening, if there's nothing better to do, until it gets out of hand.
- - -

The Pick: The Cougars already outgained L.A. by 200 yards in the first round, losing primarily due to a pair of fumbles and an interception returned for touchdown, and that was against the Bruins at full strength. Max Hall won't have to repeat his 391-yard passing performance if he doesn't actively give away a fattened pig of a win in the meantime.
- - -