Share All sharing options for: Come Let I-AA Show You Why It's Hot! Hot! Hot!

The worst thing about tonight's I-AA championship game - not "mythical," because a playoff holds every team to the same objective standard on the field, and for god's sake, drop the 'Championship Subdivision' prattle - is that, under the circumstances, it can't just be the championship game. Not when those infamous hot! hot! hot! Mountaineers of Appalachian State are there, and certainly not when their opponent happens to come out decked in maize and blue and a certain antiquated helmet design.

Appalachian could win its third straight I-AA title, an unprecedented accomplishment in either "subdivision" - Georgia Southern won four of six in the late eighties, and Jim Tressel's Youngstown State behemoths won four out seven in the early nineties, at one point appearing in four straight title games, but ASU, if it tops Delaware, would be the first school since the division was defined and brackets drawn in 1978 to actually win the playoff three years running. The Mountaineers' record against other I-AA teams on that run, if they complete it, would be 38-3. But to the wider world - and, I'm certain, to the D-Team ESPN2 crew straight out of Offense to Subtlety School, repeatedly - That Team That Beat Michigan That One Time.

Yes, please. Ixna on the Ichiganmay for a night.
- - -
It's definitely counterproductive and probably hypocritical to bring this up, but tonight's theme is inevitable. I am not a partisan of any I-AA or other sub-I-A school, but it is a fact that no non-video game team I've ever been a part of or supported has ever won a championship in any sport in anything outside of its own confined setting - Conference USA, the NFC West/South, District 4-5A, District 8-4A, what have you. Nor do any of these programs (most especially the Saints) have any reasonable hope of ever winning that one, elusive golden cup one the other side of the valley. It is in these situations that winning within that confined setting, bringing in that trophy and hanging the banner forever, becomes the goal by which the program defines itself, and to which it strives in its daily work. Any step on top of that is, for all intents and purposes, gravy. For Appalachian State and Delaware, success is winning a I-AA national championship - hell, not just success, but immortality. And so here a futile plea is issued to the wind, where it will drift and echo and fall short and dissipate in the rapidly expanding desolation eminating outward from the Budweiser Hot Seat: don't talk about the Michigan thing. Mention it maybe once, and let it go. Don't talk about how Delaware's uniforms really look like Michigan's. Please. Appalachian State cannot define itself by beating Michigan. There are no banners; it's just a story, an amazing, fun fluke, and it doesn't endure. Let the championship game carry its own weight, the end unto itself. Michigan is just gravy.

There are other directions:

* Playoff opponents take note, and attack at will: both teams beat I-A competition (Michigan and Navy, respectively) but neither App. State nor Delaware was the regular season champion of its own conference - they began the tournament as just the sixth and eight-ranked teams nationally. ASU tied for the Southern Conference title with Wofford at 5-2 in-conference, and lost the head-to-head match with the Terriers 42-31 in September. Delaware only tied for third place in the South Division of the Colonial Athletic Association, behind Richmond and James Madison and alongside Villanova, and even lost the head-to-head with `Nova. But the Hens earned the eighth seed nationally anyway (UMass and Richmond were ranked higher from the CAA; James Madison got in at 11th), went on the road to upset top-ranked Northern Iowa in the second round and went on the road again to beat No. 4 Southern Illinois in the semifinal. Appalachian State's path as the sixth seed has already included two Colonial victims, James Madison in the first round and Richmond in the semi.

* If the numbers are any indication, neither offense will be stopped at any point. Statistically, ASU ranks in the top three nationally in rushing, total and scoring offense, but 93rd against the run and 64th and 68th in total and scoring defense; the Mountaineers have a pair of 1,200-yard rushers, Armanti Edwards (who is really that good) and Kevin Richardson, and their average score through 14 games is 42-27. Delaware is eleventh in I-AA in passing offense, fifth in total and eighth in scoring, but also completely mediocre on defense, especially against the run (61st), where Edwards and Richardson will surely be gashing terrors per the usual. The Blue Hens' average score in 37-24. If those scoring averages hold - they will not, not exactly, but if they do, for the sake of predictions - ASU will win 33-32. I.e., this will be a close, entertaining shootout. 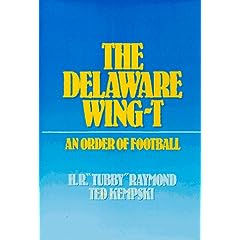 Delaware's prolific passing numbers bother me because, if they're indicative of what I assume they're indicative of - a move to the generic spread passing game - this represents another in a very long, ceaseless line of almost imperceptibly minor chips at my former innocence. Growing up, one of the omnipresent but not even remotely penetrable books on my dad's shelf was The Delaware Wing-T: An Order of Football by H.R. "Tubby" Raymond and Ted Kempski, which along with its many successors always set the Blue Hens apart in my mind as innovators and sturdy bastions of the precise, geometrically brilliant triple option most fans of a certain age grew up with. The "Delaware Wing-T" system was a ubiquitous teaching tool for years for lower level coaches. But the Hens only reached one championship game with that offense, an unsuccessful bid in 1982, and now it's gone, gone and dead and replaced and homogenized just like everything else in this sad, cruel world.
- - -