As much of the state begins to bubble over with Nutt Fever - $7.4 million worth - Southern Miss' coaching search continues more judiciously, with promises of a wide net and a wild informal list of candidates literally dozens of names long - among those rumored to be in the wings, or who should be in the wings, or who might have been contacted, or who might be contacted, or who conceivably make sense:

I'm not saying. I'm just saying...
- - -
Er. At least half of those are obviously ridiculous, insubstantial shots in the dark. Somebody's uncle in Jackson threw in Mike DuBose, for the heck of it (why not? They brought up Shula, too). How about Jay Paterno?! The Scherer thing I picked up off a Tulane message board - he's the frontrunner! - and include for the sake of hilarity on behalf of Southern fans, because the well-traveled quarterback guru probably cannot show his face in Hattiesburg again after two mostly abysmal seasons in the booth there, to say nothing of his losing seasons as boss in Memphis. Reality has left the building.

Otherwise, his old coordinating counterpart, Tyrone Nix, is the uneasy, off-the-record leader. Not that any fans seem to want him - far from it, actually; Nix was a very good linebacker in Hattiesburg in the early nineties, but his defenses at USM were below average by Southern standards, especially the oft-ripped unit of 2004 that allowed 430-plus yards six times and 500-plus thrice, and his already sketchy defense at South Carolina has fallen apart down the stretch. Darren McFadden or no Darren McFadden, there is no love for a man whose charges allowed 500 yards rushing in a single night. If a miniority candidate is a priority (there is a completely unsubstantiated rumor that it is), the preference is overwhelmingly for somehow luring Strong from Florida. Then again, Strong's name doesn't seem to have real traction, and anyway, Woody Paige likes him,which is a pretty substantial red flag.

The real straw poll leader appears to be either Hatcher or my personal favorite, Muschamp, a young, energetic coordinator with high-level SEC and NFL experience and a consistent track record of producing very good defenses on very good teams. His candidacy also appears to be pure fantasy. The best guess is Nix, and it has everyone's knees knocking.

Take a look at the national or local media, though, and you'd be surprised Southern Miss had a chance to hire anyone better than the local ninth grade coach. When a school fires an unerringly loyal coach with 14 straight winning seasons, and that school is allegedly in Hattiesburg, Mississippi - a town which may not actually exist - damn, man, that school is craaaazy:

"I'm shocked and perplexed," ESPN.com columnist Pat Forde wrote in an e-mail. "If there's a more consistent mid-major winner than Jeff Bower, his name escapes me. Who, precisely, does Southern Miss think it is?"

His colleague at ESPN.com, Ivan Maisel, was equally as puzzled.

Maisel came back Tuesday morning with a word of warning to those presumptuous, impatient hardhearts foolish enough to think anyone could adequately fill the gargantuan shoes of Bower at  Nowhere U:

For years, Bower's name received mention as a coaching candidate at programs with more resources than he has at Southern Mississippi. He stayed out of a sense of loyalty and family. He stayed, and now the school and its fans have left him.

Southern Mississippi begins a search for a coach who fits what it needs more than Bower does. It won't happen. The Golden Eagles will find that out soon enough.
- - -

Neither Maisel nor Forde mentions the ever-looming carrot of becoming a "BCS buster," but frequent commenter "Tom" did, under my original post on Bower Monday:

The flipside to Utah, Boise State, and (apparently) Hawaii making it to BCS bowls in recent years is that now every non-BCS program thinks it should be stringing together ten-win seasons.  Even ten years ago, when a Tulane or a Marshall would go 12-0, they had no hope of making it to a big-time bowl and had to be satisfied with a mid-level bowl game.  Ten years ago, if you were Southern Miss, you'd take eight wins every year over an undefeated season (but, in Tulane's case, being awful the rest of the time.)  Now, the expectations have changed for the mid-majors, and practically every program is starting to expect the kind of success that Boise State has had.  It's not so much that Southern Miss has stagnated under Bower, but that the level of expectations have changed to the point where it's seen that Bower is not going to be the guy to get them over the hump.

In other words, USM is willing to gamble here for a guy who will get them to a BCS bowl, at the risk that the same guy could run the program into the ground...
- - - 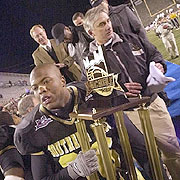 In the beginning there was Bower, and into the program he breathed the breath of life and yea, saw that it was good, all things considered.
- - -
The assumption of each of these opinions is that USM is a steady team - hey, 14 straight winning seasons, right? - that has grown tired of winning at the same level every year and wants more. This is fundamentally wrong: Southern Miss hit a wall eight years ago (in a specific game in November 2000, in fact, against then-nobody Louisville) and beneath the superficial seven-win seasons has been slowly deteriorating since by any measure you can conjure. The offense has remained bad, but the once-proud defense is worse, the losses are worse, the wins are worse, and the general feeling is and has been of a program sinking in a swamp of its own staid, inbred satisfaction with the status quo.

Southern Miss played four games on ESPN's two networks this year, none of which Maisel or Forde watched. I say this with certainty, because anyone who did watch USM lay down against Boise State and (inexcusably) winless Rice in consecutive weeks, then struggle to put away winless Marshall and get run over while allowing 200 yards rushing and barely touching the ball in the second half of a 17-point home loss to Central Florida would not suggest this team, the one predicted by everyone who cared to venture a guess to win a very weak Conference USA, represents a consistent lateral step.

No, that's wrong - this team does represent a consistent lateral step, and that's the problem. From 1996-2000, the first five seasons of Conference USA's existence, Southern Miss won 24 of its first 26 league games and three of the first four conference championships, finishing in the AP top 20 in 1997 and 1999. USM has been trading on that success a long time, and so has the media, especially when dealing with Bower, who was feted with his past glories every time he appeared on camera in some forgettable midweek game. But since then, since Southern lost two C-USA games in an entire four-and-a-half-year span, it's averaged three conference losses per season since 2001, and only lost fewer than three once in those eight years. And the losses get persistently worse, from semi-understandable defeats to other conference heavies like Louisville and TCU to disturbing lapses against middling underdogs like Cincinnati, Tulsa and Houston to outright embarrassments like Rice. We went from proud and excited to show off our team on rare television appearances to scared to death at what might happen - and, this year, the year the schedule and the experience and all the pieces were in place to restore order after Louisville and TCU and Cincinnati and even who dat noob South Florida had left C-USA with what would have once been easy-pickin' scraps, our fears were confirmed. The final record after clinging to a win over Arkansas State in front of 17,000 people, at best, was 7-5, but it felt like a disaster.

And the situation was not stagnating; it was getting worse. Everyone associated with USM will always be grateful to Bower for his success and his loyalty, and his departure is hardly under ideal circumstances, but there is nothing whatsoever in the recent history of the program that suggests a competent hire will be a dropoff from Bower's production on the field. That notion is ignorant and insulting. The real concern is maintaining his high graduation rates and even, scandal-free keel.

Pat Forde has to condescendingly ask, "Who does Southern Miss think it is?," as if there are no expectations for such a program, and it should be happy to take any little pizza web site-themed bowl game that sniffs in its direction. No. Southern Miss thinks it is a legitimately competitive program that expects to win or at least significantly contend for the Conference USA championship every season, pull meaningful upsets on a semi-regular basis and earn regular top 25 consideration. This is not new or ambitious: this is the standard, one Bower largely perpetuated but did not at all create, and it has not been remotely met for the better part of eight years. Not that anyone has to justify seeking improvement, but the change has nothing to do with the BCS or taking "the next step." It's just taking back the step the Eagles have lost.