Share All sharing options for: Better Move: Saban vs. Petrino

Bobby Petrino's stunning departure from the Big East to the NFC South attaches fairly bleeding edge relevance to the feeler SMQ sent to a few writers in the wake of Nick Saban's hop back into welcoming campus water last week to get a few perspectives on the eternal paradox: are NFL coaching jobs more "prestigious" than major college positions?

If you're comparing coaching the Browns to, say, coaching the Ohio University of Ohio, there's probably not much argument for the cache of the latter (though random GHB drugging hardly helps). And Louisville is a non-traditional, possibly short-lived power playing in a stadium named for a mediocre pizza delivery chain (and founded, oddly, by Urban Meyer?). In Saban's case, though, moving from a diverse pro city with distractions and lurking violence around every corner to a highly paid, pressure-packed position in a state that will ritualistically chart the odometer on his car and his bowel movements and in which his team's performance is the likely cause of violence, it could be a lateral move - in some eyes, perhaps, even a "promotion" of sorts; Scott Linnehan is an NFL head coach of...who, again? He is supposed to be better than Pete Carroll?

A few selected opinions on Saban's move from around the Web horn:

We often elect former governors to the U.S. Senate, which seems odd, because the skill sets involved are completely different.  By the same token, we act as though football is just football, without regard to the level, but it's not.  This is why so many coaches are demonstrably better at one level than the other:  Bill Parcells is a much better pro coach than a college coach; Pete Carroll, Steve Spurrier, and Nick Saban are much better college coaches than pro coaches.  With the exception of Bill Walsh, the coaches who succeeded at both levels (Jimmy Johnson, Barry Switzer) aren't the kind of guys you'd want to emulate.

Personally, I'd pick the college game, but that's strictly an individual preference.

It's only a step down if you got shitcanned.

College is the step up. Three words: USC. Song. Girl.

I don't get why everyone's so bent out of shape about it. Pat Forde is calling him a liar and making a big deal about it. First of all, Forde should just shut the fuck up because that asshole has no idea what it's like when more than one person wants to hire you. Why does a no two weeks ago equal a no today? Doesn't the guy have the right to change his mind? He did the same fucking thing when the Dolphins hired him. Who the fuck was dumb enough to be surprised at this?

Think about the boosters in Tuscaloosa. They just got snubbed by the coach from West Virginia. Mountain fucking mama and all that shit. "No thanks, guys, I'm good here in West Virginia." You think that didn't piss those old fucks off? You think that didn't make them realize they were gonna have to break the bank when Saban said he wasn't leaving the Dolphins? Where do they go if they don't get Saban? They mope back to their Tuscaloosa whorehouses and cry in their Johnnie Walkers, that's where. Alabama had no choice. Think: If they don't get Saban, they're stuck with some lowly, shit-assed former-assistant-coach hire. And you know those stodgy old fucks would never let that happen to their "glorious" program.

Besides, $4 million can get you an awful lot of whores in Tuscaloosa.

Some further deep, definitive analysis in the only proper fashion - tale-of-the-tape style:

Fame/Insane Fan Obsession: SMQ, a devoted fan of a certain NFC South-winning franchise, knows pro fans are passionate and crazy. But for sheer, unadulterated, GHB-slipping, tarmac-mobbing hysteria, there is no topping the rich "tradition" available only on campus: 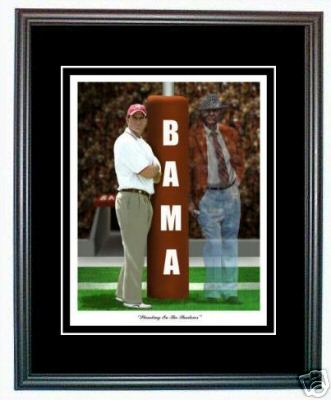 Bill Cowher won a Super Bowl. But did he ever get anything like this with Chuck Noll's ghost? Case closed.
- - - - -

Money: Universities have some deep pockets crawling around, willing to dish out some dough for the glory of old alma mater, but overbearing rules keep the lid on the most outlandish deals. Saban's deal with Alabama is considered grandiose, but at $4 million annually it will actually leave him slightly, um, poorer unless he cashes in on incentives than the $4.5 million he was scheduled to earn over the last three years of his relatively less outrageous contract with the Dolphins; Petrino is slated to make roughly twice the money with the Falcons he was getting at Louisville.
Advantage: NFL. But only because Jerry Jones and Arthur Blank don't have to answer to trustees and Congress and the like.

Competitiveness: Win big in the NFL, reap the rewards as a winner for life - nothing's bigger than the Super Bowl. But also remember there are no North Texases or Vanderbilts in the pros; strategies for longevity on the college scale are a bit more straightforward, and you only have to win a couple big games a year to become a legend rather than about a dozen.
Advantage: NFL. Not that college is easier - not every school can be a winner - but there's some virtue to entering the season not being being guaranteed a .500 record on talent alone. Also: Pete Carroll.

Hours: Everybody works hard, nobody sees their family for months at a time. For Saban, the midnight oil's-a-burnin' regardless of location or employer, and pro coaches do things like sleep in their offices and make up phone book-sized  dossiers on quarterbacks of division rivals. Whereas Petrino probably lost little sleep the week preceding Louisville's collision with Middle Tennessee State. But pro coaches at least don't have to deal with the never-ending recruiting carousel or Spring practice.
Advantage: NFL. Seems somewhat 9-5 in the offseason. Sean Payton was at the Sugar Bowl Wednesday with his little son. The incessant pursuit of ever-earlier verbal commitments means college coaches have no respite.

So, when broken down scientifically, the NFL - and, by extension, Bobby Petrino's current career path vs. Nick Saban's - earns a slight advantage for not including Middle Tennessee State. Though it does still have the Lions, who wear the same colors and, in a pinch...