Thursday: How Florida Can Win.
Friday: When Ohio State has the ball.
Sunday: Special teams, mascots and other oddities.
Monday: Hype! And a prediction.

Today: When Florida has the ball.
Chris Leak's last stand.

Basics: In general, it seems to SMQ (who could be wrong) Florida has earned a reputation as a talented but inconsistent bunch that frustrates by alternating flashes of brilliance with bouts of lax execution and an overreliance on gimmicks, but to the extent that perception exists it stems largely from the standard set by Steve Spurrier's old Fun `N Gun absurdities and expectations that followed Urban Meyer's explosive success at usually lo-flow Utah - the numbers actually reveal the Gators to be an offense that's run and passed at the same clip as Ohio State's vaunted unit and turned in more "explosive" plays (compare UF's runs of 10/20+ yards and passes of 15/25+ as well as plays resulting in first downs here to Ohio State's here). Skill-wise, the overall speed and receiver depth matches any school's anywhere; the only apparent cause for the lag in scroeboard production - where Florida failed to crack 30 in-conference until the SEC Championship and OSU averages more than a touchdown better per game - is turnovers, mistakes that cost the Gators 19 times in nine SEC games.

On that level, Chris Leak threw a career-high 13 picks (Troy Smith tossed just five) and Ohio State comes into the championship having intercepted more passes (21) than all but four other teams in the country and wound up leading the nation in scoring defense largely because of its ability to leave even the few competent offenses it's faced emptyhanded after yielding a few first downs - check, for example, drive charts for Iowa and especially Texas, which each moved the ball respectably in chunks but ultimately in vain. Michigan, which did not turn the ball over, was the only OSU opponent to top 17 points or 350 yards and finish more than a couple sustained drives in the end zone. Even the Wolverines, though, came up empty on a key 52-yard drive in the third quarter.

Florida  is very unlikely to do much based on big offensive line push except on short yardage plunges by Tim Tebow because it operates almost exclusively on misdirection out of the shotgun, but it used a mismash of backs, quarterbacks and receivers darting in all directions to muster a rushing offense that averaged 160 yards, ranked third in the SEC and averaged 4.3 per carry altogether against the worthy defenses of Tennessee, LSU, Auburn, Georgia, Florida State and Arkansas.

Key Matchup: Drew Miller and Carlton Medder vs. Quinn Pitcock and Vernon Gholston
You know Miller as the lead battering ram pulling from his right guard spot when Florida calls for its Tebow Smash Left, but he and right tackle Medder draw the toughest assignments Monday against the left side of the OSU defensive line, which with Pitcock's muscle and Gholston's burst combined for 15.5 sacks and 25 tackles for loss in the regular season. For a young front that was considered such a liability in August, Florida's line has protected Leak reasonably well (1.69 sacks per game allowed, 44th nationally), but did give up three sacks to Tennessee's hellacious front seven and, in terms of size and speed, Gholston is a pretty close approximation of Auburn's Quentin Groves, who terrorized Chris Leak for three sacks and the decisive fumble in the Gators' only loss in October. UF must also be hoping he's potentially also a liability against the run if coerced too far upfield as a pass rusher. If Gholston causes trouble there, the Gators will be forced to either keep one of its pass-catching tight ends - or roving blocker Billy Latsko - in to help or screen the hell out of him.

Florida's line is not Michigan's and operates in a system nothing like the power/zone attack Michigan used to largely gash OSU's front seven, but Pitcock and Gholston have made a living by penetrating, disrupting and funneling everything into the middle for James Laurinitis to clean up, and consistent penetration will not be very friendly to the draws, counters, reverses and other long-developing actions that make up most of Florida's non-Tebow-based running game if ballcarriers can't hit the corner full speed because of silver helmets prowling around the backfield. 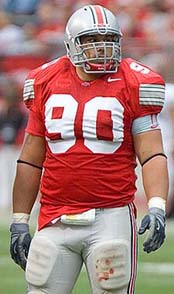 That blood on Pitcock's pants is not his own.

Florida's Offense Wants: The most successful model against the OSU defense by far is Michigan's straightforward effort at power and balance, and again, deceptive, misdirection-heavy Florida is definitely not Michigan in formation or philosophy; personnel-wise, in fact, Florida's advantage rests in its bevy of receivers against Ohio State's rarely-tested secondary, which hasn't seen a unit as polished as Florida's or - aside from Mario Manningham, in a different way - an individual home run threat with the trip-wire sensistivity of Percy Harvin. As a group, they've been asked and likely will continue to be asked to do a lot aside from catching passes downfield. Bob Davie - not the paragon of effective offensively philosophy, granted - suggested in a segment on the Worldwide Leader Friday that Florida pretty obviously wouldn't be able to run because of its line against OSU's and therefore had to rely on "unconventional" plays (reverses, throwbacks, halfback and wide receiver passes, etc.), and in his "Football 101" column highlights the Gators' "speed option reverse" and "zone lead reverse pass" off Tebow Smash action. SMQ agrees the Gators will probably be looking to connect on one or two tricks in that vein, per Urban Meyer's general unpredictability as well their success in the SEC Championship and elsewhere, but he doesn't take for granted Florida has no hope of cobbling together an adequate running game. 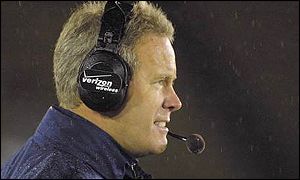 The one team that did a servicable job running against Ohio State out of the shotgun, way back in September, was Texas. Longhorn backs Selvin Young and Jammal Charles had 164 yards on 27 carries (about 6.1 per, math majors) between them, much of that out of the shotgun on counters, traps and draws similar to those Harvin's taken to the house in Florida's last two games against Florida State and Arkansas. Leading up to OSU's game with Michigan, SMQ thought the Buckeyes had showed some susceptibility to competent rushing teams that had fallen too far behind too quickly to continue handing off. Texas, still within ten entering the fourth quarter in Colt McCoy's first really real start, probably passed too much from the outset considering the consistent gains of its backs. It's up to Meyer how aggressive he'll allow Leak to be in the passing game, but short of the senior exiting on the game of his career, Florida doesn't have to average six yards as long as it gets itself into as many managable third down Tebow Smash situations, where it has been remarkably, consistently effective, as possible. SMQ said Thursday and repeats: every Florida first down is another two minutes Troy Smith doesn't have the ball.

Assuming Florida will be able to move to some extent, extend drives via Tebow and pop a couple big plays - all of which has happened in every game to date - the primary objective, again, is don't turn the ball over. Ohio State has fed off advantage-building mistakes and the resulting one-dimensionality that fuels a greater pass rush, more offensive desperation and subsequently more mistakes. Leak's hardly immune to giving it away, and much moreso if the score makes significant portions of the gameplan untenable.

Time yet for that "legacy game"

Ohio State's Defense Wants: If Leak is the most capable, experienced quarterback OSU's faced - that's if - that doesn't make him exactly frightening, and any situation featuring an opposing quarterback dropping to pass has been generally good for the Buckeyes most of the year; this is an outstanding pass rushing team that's hellacious on third down, gives up very few big plays and puts the sleeperhold on one-dimensional offenses in a hurry - watch the interception totals rise along with opponents' deficits and in the second half. If Davie and Jim Donnan are right about the chances of Florida's running game sans double passes, Monday night will be one of the longest Leak has had to face in four years. The more consistent the pressure from the front four, the more help the secondary will get on UF's wideouts and the more looks it will be able to throw at Leak.

Defending reverses, shovel passes and other "unconventional" runs is a matter of discipline and responsibility far more than athleticism - watch here at about the 2:30 point for an example of Arkansas defenders in various states of "out of position" attempting to defend Harvin's long touchdown run off counter in the SEC Championship, and later as the Gators score on a reverse pass off Tebow Smash action from Andre Caldwell to Tate Casey in which no Razorback is home to disrupt Caldwell. Ohio State can be expected to be in better position for what it's seen, but will have to avoid falling asleep for whatever new hottness Meyer throws its way - a triple reverse, statue of liberty flea-flicker, perhaps? Refering again to the Pitcock-Gholston combo above, penetration shoots it all to hell (permission granted to run with the double entendre if you must).

Variables: It's all about time - Florida's receivers should able to find room to work if Leak is kept clean enough to find them...Does Meyer play aggressively, to keep up with the Buckeyes, or conservatively, to throw a wet blanket on the chances of an escalating shootout his team can't win?...Is Ohio State the defense to put Tebow in his place? Every other unit Florida's faced for two months has known its fate when the freshman lines up, and none has been able to do much of anything about it.

Verdict: So much depends on how close the Gator defense is able to keep the game: there doesn't seem much chance, given Ohio State's tendency to run away rather quickly and Florida's to pull out closer defensive games, of a UF blow out. But the opposite  could quite conceivably happen, and much more quickly if Florida finds itself for the first time having to throw against a stacked deck to stay in the game. The recipe for success is much more likely to be quick, controlled passing off the Meyer version of play-action, timely running and an effective Tebow to sustain drives.