Share All sharing options for: SMQ Does Hereby Resolve...

SMQ acts like he knows what he's talking about, but at the same time he gets all heavyhanded, Louisville has to fall behind in the fourth quarter to find its inner, explosive self and score a pair of unanswered touchdowns to keep SMQ from falling to 0-3 in his predictions of the opening round of big money games. Was he wrong to fail to forecast that Wake would dramatically outpace all of its season averages as Riley Skinner delivered the best passing game of his young career against probably the best opponent the Demon Deacons have seen, while Louisville struggled to reach any of its typical heights until the last possible moment? Maybe - Bill Simmons' perpetual rule should apply here as well: the overarching lesson of the BCS is that SMQ is an idiot. He will now light himself on fire.

The turning of the new year along with obstinate victories by Southern Cal and Boise State and Wake's callous disregarding of SMQ's near-dismissal for the better part of three quarters Tuesday is just the impetus Sunday Morning Quarterback needed for a little introspection, and a few subsequent resolutions:

• Give Everyone a Chance: SMQ has always resolved to avoid dismissing conceivably competitive teams outright and to recognize any team in a game considered worthy of analysis and/or a pick has a chance to win, and to avoid anything but ironic references to teams or players "sucking" or otherwise falling short of expectations without substantial evidence to reinforce that opinion. When he makes fun of, say, Reggie Ball, or Alabama, it's either in good/ironic fun or backed with fair, dispassionate criticism or a tone of disappointment, never glee (except with Fowler, which was a lot of fun). Reading Tuesday's Orange Bowl preview - or perhaps even Sunday's look at the Fiesta Bowl, which he thought would be competitive, if not as competitive as it turned out - readers could have come away with the sense SMQ thought Wake Forest had no chance to beat Louisville, which was not the case; anyone who's ever predicted any human performance is acutelly aware evidence is never so overwhelming as to preclude any chance of the exact opposite actually occuring at the nearest opportunity. This is not always clear.

The same courtesy should continue to extend to other writers, whose ideas may be logically - if often sarcastically - refuted, but never in the form of a personal attack along the lines of "idiot" or "asshat" or whatever.

• Accept the Premises/ Be Less Cynical:

Aside from his upcoming playoff debate with Kyle, SMQ resolves to put aside anything but the most cursory, glancing swipes at the mythical championship as constituted under the BCS. Not that his opinion will change at all, but he's laid out his case against the system in post after post and will consolidate the myriad technicalities, qualifications and nuances into a permanent link soon enough, and that will be enough of that. The reaction to Boise's emotional and fun win Monday wasn't intended and didn't deserve to evolve into another subversive harangue.

• Talk More Actual Football. On the same note, this season has included a lot of hashing about semantics , which is important for thinking consistently and systematically about elements as essential to the sport as polls and rankings, but not in the form of an ongoing lecture. Football is great because of players making plays, as they say, and requires no stabs at some sort of unifying theory. Note: analysis of statistics and trends qualifies here as `Actual Football,' in spades.

• Have Fun. Never forget where you came from: Sunday Morning Quarterback began as an occassional hobby with no readers, no agendas and no expectations. To the extent it's a responsibility these days, it's usually only in the most positive possible way. So far, so good. 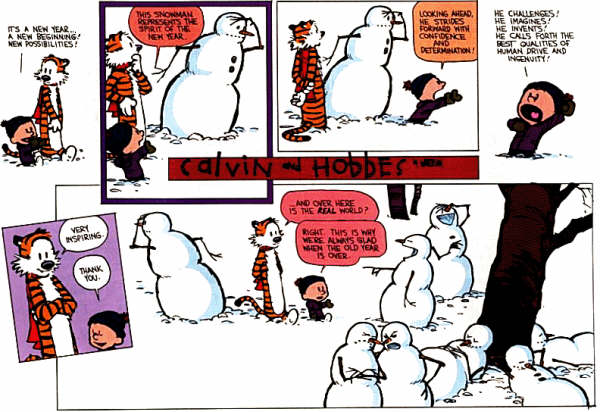