SMQ Sits Down With: Colt Brennan

Share All sharing options for: SMQ Sits Down With: Colt Brennan

Over the past two seasons, Hawaii's Colt Brennan has established himself as one of the most prolific passers in NCAA history, riding the run and shoot to a record 58 touchdown passes this fall, culminating in a five-touchdown second half in Hawaii's comeback win over Arizona State in the Hawaii Bowl on Christmas Eve. The former Colorado walk-on, once accused of rape and eventually convicted of breaking and entering and trespassing in Boulder, has 93 touchdowns in two seasons since transferring to Honolulu. After Brennan threw for three touchdowns to beat Purdue in November, the city's mayor, Mufi Hannemann, declared Colt would beat him in an election, hands down.

Wednesday, Brennan reversed an earlier decision to enter April's NFL Draft, withdrawing his name and pledging another season in the islands. SMQ flew to O'ahu this week to talk with the quarterback about his checkered past, overcoming obstacles and perceptions, record books and why he couldn't give up the life of a star in paradise.
- - -

SMQ: You've elected to return for your senior season after declaring for the draft, and obviously it was a difficult decision you dwelled on intensely for a few days. What ultimately brought you back?

Colt Brennan: Well, love. [singing] Love will bring you back... [laughs]. No, really, primarily I'll be back because I love Hawai'i. The islands are beautiful and when I thought about leaving, ultimately I just didn't want to face that. I have a good life here. Like I've come out of a tunnel almost, and I see the light at the end. I've been involved for the last year in a research project on ancient Hawai'ian folklore and mysticism, and I'm very excited about it because I think I'm close to a real breakthrough involving our existing understanding of the 'aumakua, which is the spirit of a personal guide or ancestor that often manifests itself as an omen in an animal, like an owl or a hawk, or sometimes a rock. Personally, I've identified with the `aumakua through 'iole li'ili'i, which is a mouse, but my research into ali'i ancestry and a few rare ancient texts and interviews with some elderly natives who remember some of the older traditions has led me to believe it can be so much more than that. And I want to explore all the possibilities of `aumakua and their relationship with Ku-ka-ili-moku and Kaho'ali'i before I leave for the next step in my career. So the NFL can wait to see what Colt Brennan can do. I'll only be better in a year. My strength really can only grow the longer I'm here.

SMQ: You mention having a good life after some `darkness,' as it were. Things were difficult for you before your move to Hawai'i.

CB: I don't like to dwell in the past; He lumi maika'i keia e ku pololei ana i ke kanaka peke - "He who looks behind him cannot move forward except by falling on his face." I had some issues at Colorado, yeah, not all really my fault, but I did make some mistakes. I don't deny that. I feel like my life is really coming together and I'm really finding myself on the islands, though, like, getting to know my true self and establishing my identity, which I finally realize is what college is really all about. You know, back then, football, school, at root it was all about partying, alcohol and the girls. And you know, I still do pretty well. I'm not gonna lie. Some females show interest in the Colt, who's he to turn it down, am I right?

SMQ: God, tell me about it.

CB: We are beings of the flesh. And that's so much of our problem, and was so much of my problem in high school, then later at Colorado, I still hadn't grown out of it. And so it's no surprise I hit rock bottom and wind up getting arrested. It was inevitable. That Colt, he was obsessed with status. With notches on his belt. With proving he was "a real man," or what I thought then made someone a "real man."

SMQ: How much of that stemmed from a feeling inadequacy as a walk-on, from being Matt Leinart's backup in high school?

CB: Oh, all of it. Nail on the head. That was everything. Again, status. Dreaded mahalo. Matt was taller, better looking, smarter, made better grades, got the best-looking cheerleaders, threw the ball farther, got the big scholarship in Hollywood. Just ate me alive. Living in that shadow. And if I could drink enough, could get enough girls, that would overcome all those shortcomings. But if man is a being of the flesh, he is equally one of the spirit. When I first came to Hawai'i, I didn't really feel like I fit. It was the same thing. Timmy Change was here, local boy, big star, broke all the records, and it was like `Here we go again.'

And at first, I approached that in the usual ways: drinking, trying to prove myself by getting laid, and so on. But I was empty. And that's when, in a state of wretched desperation, I found myself walking alone at the foot of the heiau at Kawaipapa, dedicated to Kaho'ali'i, which is where he first revealed his spirit to me.

CB:  But only partly. He sort of seduced me at Kawaipapa, gave me a tiny glimpse of what was possible with this power, this power that's lived on through generations of Hawaiians for eons. And I kept coming back, trying to recreate that experience, to get that sense of an eternal spirit overtaking my body that I had experienced so fleetingly. But never. I began to read more, to research more about the place, the shrine there dedicated to Kaho'ali'i. I found it was originally intended for human sacrifice. And anytime they built anything like it, and it was being dedicated for the circumcision of a young chief, they set aside a night dedicated to the god Kaho'ali'i. They did this for other gods, too. But for Kaho'ali'i, during his night, anyone who left their house was killed. Some of the patterns on our uniform pants are descended from the markings of a naked priest impersonating Kaho'ali'i at the annual makahiki festival, where he swallowed the eyeballs of a fish and of a human victim. The priest would actually try to lure gullible people out of their houses to be sacrificed. It was horrible. And I thought, `I could lure safeties in the same way.'

So I read more, and became a little bolder, and I was better in practice. And so I became the starter. When I was a sophomore, my first year, I did pretty well. I threw for a lot of yards, led the nation in passing, but the team was losing and it was just, sort of, you know, ordinary. Because I didn't realize that I wasn't all the way in. I was still just Colt, thinking about the murderous spirit of Kaho'ali'i, rather than actually becoming Kaho'ali'i personified.

CB: I'm not sure that you do. In order to become one with Kaho'ali'i, one must partake of the ancient, bloody ritual. So before every home game this season, in consultation with Jerry Glanville - who has been an indispensible guide to the island's dark spirits, beings he's called up for years and which have driven him to a state of madness - we would strip and paint our inner thighs in the traditional fashion, and consume the eyes of a fish, and the power would enter us. And it's stronger every time. Every game, the strength of Kaho'ali'i is greater and greater, until it can't be overcome, until I am a juggernaut filled with his bloodthirsty appetite. On the field, I am Kaho'ali'i.

CB: Save me. From Kaho'ali'i. His lust for touchdowns can't be sated.

CB: In ancient war ceremonies, he commands human sacrifice from those who unleash his spirit. From me, on the field, he craves touchdowns. Over and over, only touchdowns. More touchdowns than can possibly be given. Touchdowns or blood!

CB: It took my dog. Oh, my god! For only throwing two touchdowns against Oregon State, not enough...Kaho'ali'i killed my dog. Two touchdowns! The hubris, to think I could disrespect the spirit by underestimating the cover three! I became so panicked during the game, as his anger swirled around the stadium, blew trash all over the field in mounting frustration. The Beavers! The madness! The beast demanded the record, more touchdowns than any mortal has ever bestowed unto any god, and when I failed, it left Makamae's body in my bed like the horse in The Godfather. The carnage! But the animal, to Kaho'ali'i, the animal meant nothing; it was only a warning: for weeks, I knew I was next. 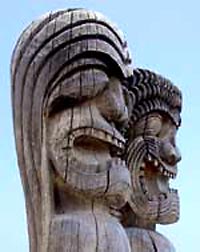 And I wanted out. I tried. I tried so hard to get out. Before the Aloha Bowl, I refused to eat the eyes of the fish. Glanville came up to me before the game, with his shirt with the Santa sleigh dashing around his shoulder, and I could see in his eyes, hear in his voice the venom of Kaho'ali'i, before he even consumed the fish eyes. And I wouldn't do it. I refused. I thought I could throw touchdowns on my own. But face it, this isn't high school! I weigh 150 pounds! I was a failure on national television, my team was a failure. Three points in an entire half? The stadium was on the brink of tears, I could feel the entire island, generations, the 'aumakua, beginning to wail at my futility. They commanded touchdowns, too. And like a junkie, I went back. God help me, at halftime, I went in the shower with Glanville, stripped, ate the eyes of the fish and summoned the dark lord of the ancient isle. And he entered me, and bestowed on me the power of five touchdowns in a single half - his greatest bounty yet!

CB: No! No! Don't you see? Fool! Blind fool! Now I'm his slave! I went back to him; I am in bondage for eternity. Now I am impotent without his bloodthirsty rage filling my puny arm! I can't leave. I put in my papers, I tried to escape! But you're never out of the vengeful grasp of Kaho'ali'i! I have awakened a monster so enormous, and fed it until its insatiable appetite looms over my every movement, every thought, and it is only through me, through reaching the end zone, that human life is spared; I can never leave - I can never stop throwing touchdowns. For the sake of the island and its people, I am in bondage to the run and shoot. I can never leave!

SMQ: But your eligibility...

CB: The point-hungry gut of Kaho'ali'i is not beholden to eligibilty! It must be fed! Seventy touchdowns! Eighty! Kaho'ali'i through Colt Brennan will not be stopped! Feed Kaho'ali'i! Feed his lust forever!

Colt Brennan is a senior quarterback at the University of Hawai'i.