Ah, bowls you know. You may not exactly recognize them anymore, but you know them.

These two games look like upstarts - as the "Insight" and "Champs Sports" bowls, they've only been around since 1998 and 2004, respectively, only a dozen years combined - but in actuality they go back to 1989 and 1990, a combined 35 years of postseason goodness in various guises. Read on to jog your memory on which ones.

Site Inquisitor: These are the ones located in:

If you said b) Tempe and Orlando, you either know your bowls or randomly picked two oft-visited warm weather sites with multiple long-time tie-ins. Either way, you're a bowl trivia stud, stud.

Each stadium in tonight's spotlight is a longtime bowl veteran, and, recently, often a juggler of postseason games. But spurned by the Fiesta Bowl and the Official National Championship Game of Unquestionable Authoriteh for the ultra-modern, retractable pleasures of University of Phoenix Stadium (yes, that University of Phoenix), poor Sun Devil Stadium, site of much glory and appropriate hoopla, is relegated solely to the Insight Bowl. And that on the NFL Network.

The Champs Sports Bowl is a warm up for Citrus Bowl Stadium, which is looking ahead to hosting its namesake the Capital One Bowl Monday. If, say, Medieval vikings attack the field, this is probably only a publicity stunt for the credit card company, unless Mike Leach has guided his charges into the wrong stadium. 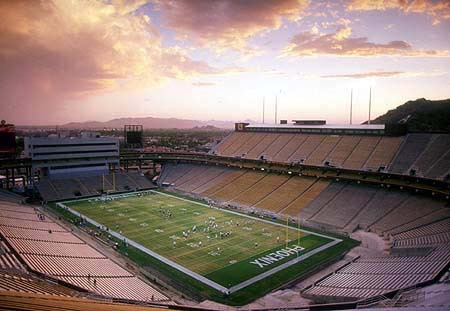 Formerly Known As: The Insight Bowl's most recent incarnation is as the Insight.com Bowl, but now represents, rather than a Web site, penetrating mental vision or discernment and the faculty of seeing into inner character or underlying truth. The explicit Web reference was dropped because...it was cheap? Everybody's doing it now (well, not everybody, but the PapaJohns.com Bowl)? The `dot com' thing is so 2003? Prior to the Web invasion, this was the less ephemeral Copper Bowl.

The Insight, though, along with every other game, is a beacon of title stability and recognition compared to the game in just its third season as the Champs Sports Bowl, its seventh distinct sponsor-derived name since debuting - with a very good Florida State-Penn State collision - in 1990. To wit:

Two of the three Blockbuster Bowls and the first Carquest Bowl (Steve Taneyhill's personal One Shining Moment against West Virginia) were actually January games of little consequence, only the one of which will apply tonight to Purdue-Maryland.

Primal compulsion assures id will watch for...
Monumental passing numbers are the norm for Purdue and Texas Tech anyway, and each gets a defense tonight with little experience dealing competently with even the average quarterbacks they've faced. In no case will scoring be at a premium.

Socially-conscious superego will instinctively resist...
Here we are a good week-and-a-half into the schedule and we're still trotting out 6-6 teams? Ranked in the bottom ten nationally in total defense? Minnesota has won, when it has won, via the nation's best turnover margin, a sign of sure Gopher massacre if Graham Harrell isn't set to `Interception' mode, as he was against Missouri and Colorado but not really anyone else.

With its defense, Purdue is no slighted juggernaut, but statistically, no eight-win team could conceivably be worse than Maryland. The Terps couldn't run, couldn't throw, couldn't stop the run, were terrible hanging on to the ball, couldn't pressure opposing passers, were outgained overall in 11 straight games and outscored, by average (21.7-23.1) for the season. What the hell is going on out there? SMQ emphatically insisted even prior to the season-ending two-game slide that this is not a good team, and thank god the jig was up against Boston College and Wake Forest, before UMD swindled its way any nearer to BCS millions. What kind of game between major conference eight-game winners features run defenses ranked 102nd and 113th, respectively?

Don't be fooled: this kind of thing happens all the time

...why not drive to that charming bed and breakfast where the numismatist  keeper said he might be willing to part with a pair of his copper 1794-97 Liberty cap half cents, and possible check into an 1854 silver Longacre three-cent piece? You've been kicking yourself since you missed out on the piece at the "Numismania" auction in April, after all.

8 p.m. - The CW - WWE Friday Night SmackDown!
Top matches from 2006, including action from "Royal Rumble," "SummerSlam" and "WrestleMania." Batista, Rey Mysterio and Undertaker are among the featured stars. 120 mins. TV-PG

8:30 p.m. - Animal Planet - Meerkat Manor
As the second season ends, winter is drawing near, and Mozart, abandoned by the clan, struggles to take care of her newborn litter; the rival Commandoes arrive, sparking a battle. 30 mins. TV-G

9 p.m. - Nickelodeon - Fairly OddParents
School's Out! The Musical: A musical adventure finds Timmy leading kids in a revolt against fun-hating grown-ups and a pair of boring pixies (both voiced by Ben Stein) out to take over the world. Eleven original songs are performed, including two raps by Method Man and Redman. 60 mins., TV-Y

For combining eight-game winners from respectable conferences, however flimsy the statsheet, SMQ bestows upon the Champs Sports Bowl three boxes:

Both defenses in Orlando are bad, and though Purdue's seems to have been more consistently bad, it is at least able to counter with a shootout-worthy passing game, which Maryland cannot. The Terps may have to lob up the occasional big play to its resident small forward receiver, 6'4" Darius Heyward-Bay, but SMQ is betting it will take several to keep pace without the aid of turnovers - the X-factor here, and Purdue's oft-stricken Achilles heel - with the Boilermakers gunslinging ways, which is a couple more than Maryland has in it.

CAUTION: For obsessed, inoculated fans only.

Appropriately enough, as only obsessed fans will be able to get the broadcast of the Raiders' swift and systematic disembowling of the Minnesota secondary, which only redeemed its generosity in the final three games by aiding those victories with nine total interceptions. Graham Harrell, his midseason lull apparently passed, hasn't made those mistakes in weeks and is in a good position to use the Gophers as a stepping stone to more confidence heading into 2007, the first Raider passer to have such considerations in five years.