Foisting Mid-American champions on an indifferent nation since 1997.

Location Inquisitor: This is the one located in:

If you said d) Pontiac, wrong! SMQ got you! The answer is e) None of the Above, because the game will be played in Detroit. That's the "Motor City," doofus, not Pontiac. They're going to tear the old Silverdome down. Or make it a casino.

At any rate, fabulous Detroit, Michigan, invites visitors to discover the New Detroit, constructed on the ashes of Old Detroit, yet retaining a soul that reflects the struggle, diversity, reality and triumph of a community of people in the oldest city in the Midwest. As well as rapid economic, social and political devolution and relatively stupefying poverty.

The Venue: If Cincinnati's old Riverfront Stadium or the Vet in Philadelphia were virtual slum-like paragons of no-frills, ACL-shredding discomfort, Ford Field's classy, glassy exterior marks it as a pioneer of athletic arena as hotel lobby meeting room, a beacon of aggressively neutral, bookstore-inspired, faux upscale, brick-facaded suburban plush. SMQ imagines a concession stand by Starbucks and ultra-comfortable seats and just a great place to, like, chill for a minute, right? And patrons aren't even required to cheer. Just enjoy the game at your own pace and if you feel compelled to get a little rowdy, well, then, it's appreciated, as long as maintained within designated zones and appropriate levels of enthusiasm. But seriously, man, no pressure. Not that with the Lions, the MAC Championship and the Motor City Bowl that, well, you know...

Buy tickets to WrestleMania 23 at Ford Field in April here. 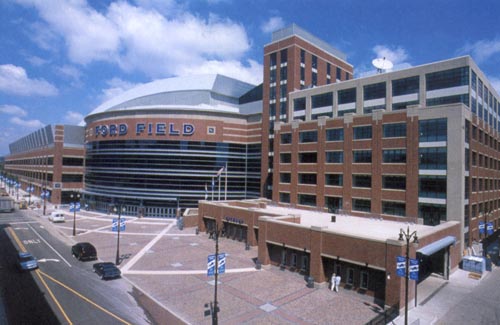 Formerly Known As: Despite its status as venerable elder statesman of the manufactured dregs in its tenth season, the Motor City Bowl has never been known by any other title, or even had its longtime "presenting sponsors" out front. Though, these days, they are pondering a rebranding effort that could result in the Patiently Restructuring Bowl.

The Network Pitch: Newbies! Middle Tennessee State has never been to a bowl game since moving up in 1999 to the subdivision designated for such contests, while interim Central Michigan coach Jeff Quinn has never been the head man in any sort of game before being thrust into the role three weeks ago when coaching dominoes sent Brian Kelly tumbling down to Cincinnati. Postseason premiere premises play out precociously...Next!

Also: Though he's gone, and out of his *!ing mind, the Brian Kelly spread that resulted in the emergence of freshman quarterback Dan LeFevour, the highest scoring unit in the MAC, Central Michigan's first conference title in 12 years and occasional "irredeemable insanity" highlighted by the ill-fated, John L. Smith Trophy-winning swinging gate call on a decisive fourth down with a chance to beat Boston College presumably remains. LeFevour threw for more than 2,800 yards and 25 touchdowns, ran for more than 600 yards and spread the ball around to five players with at least 30 catches.

CMU also trots out the best defensive player Middle Tennessee State will see all year, judging from his reputation, quarterback-assaulting Dan "McBain" Bazuin, who has 23 sacks, 39 tackles for loss and nine forced fumbles in two seasons (most of those last year, but don't let that fool you into thinking he's anything but disruptive hell for right tackles and, by extension, every other offensive entity).

Socially-conscious superego will instinctively resist...
Middle Tennessee's terrible, low, low-octane offense (108th passing, 105th overall) and ghastly performance (0-5 by more than four touchdowns per game) against opponents with winning records, not all of which were Oklahoma. The Chippewas, on the other hand, were competitive against B.C.and Kentucky (a game CMU topped 550 yards total offense) and waxed Western Michigan and Ohio University of Ohio, and therefore have little to prove from their inevitable trouncing of the Blue Raiders.

...why not sit down to contemplate the introductory paragraph of that inquiry to the old associate who told you during the last Delbarton fundraiser he knew of someone who might be able to supply an original, refurbished version of the strong but light tubular chassis with welded (never bolted) floors to complete your restoration work on the pre-war "Bimmer Winner" Frazer Nash-BMW 328, maybe while finally assessing the Blandys 1964 Bual Madeira?

8 p.m. - WE - Hope and Faith
The Gooch: Kelly Ripa's husband (and her former "All My Children" co-star), Mark Conseulos, guests as a recently retired ballplayer who moves next door. Faith sees them as possibly Glen Falls' "first power couple," but he has no such visions. Meanwhile, are Hayley and Edwin (Brett Murphy) merely study buddies or something more? And Hope makes an astute observation about Sydney's boyfriend. Henry: Stark Sands.

9:30 p.m. - A&E - Dog the Bounty Hunter
If You Knew Nunu: Chasing a suspect through an apartment complex and a shopping mall.

For a mid-major only dog of Central Michigan-Middle Tennessee State, SMQ gives the Motor City Bowl one box:

MTSU might be happy to be there, in a bowl, any bowl, but so, too, will Central Michigan, just a couple weeks removed from trouncing a better Ohio University of Ohio team in Ford Field. The Raiders, on the other hand, played just four home games in a twelve-game season and ought to be pretty road-weary; they also aren't capable of fireworks (just one 400-yard offensive game) and have to keep things here low-scoring, and CMU, unless you're Michigan, doesn't do low-scoring.

These Chippewas have their eyes firmly on the prize. The elegant trophy, that is. Er, the football trophy, not Miss Michigan.