Relevant Games:
24-7 at Texas: The best team OSU's seen to date, and probably the only one resembling Michigan's overall talent (if not smarts). Probably a different experience against the `Horns in September than a couple months on, if Colt McCoy is in the lineup.
28-6 vs. Penn State: Far closer here than the score showed. Bonus touchdowns late on gift interceptions by the late Anthony Morelli betrayed the 14-6 final this rain-soaked game was born to be.
38-17 at Iowa: It's not like the Hawkeyes never had a chance. It just disintegrated very quickly in the second quarter, when the proud defense turned in its papers for the season.
38-7 at Michigan State: Entering the game, statistically, the best overall and most balanced offenses the Buckeyes had to face. Even if it was finished attempting to compete and everything.
17-10 at Illinois: The only box score resembling a legitimate test for Ohio State. Not necessarily the key to unlocking the safe hiding the 2006 edition of "How to Beat Ohio State," but maybe the closest thing we have beyond valuable contribution of "don't give out free interceptions in a close game."

Favorable Trends to Extend: Statistically, OSU is averaging about a touchdown more per game than any other team in the Big Ten, and is much scarier than that, personnel-wise. The Buckeyes are deep, they are balanced, they are experienced, they are cool under pressure. They can run, throw, line up in any formation with success, burn a secondary to a crisp instantly - OSU has 154 big plays on the season (runs of 10+ yards, passes of 15+), which is almost 15 per game; for comparison, that's cumulatively about two games worth more than Michigan, Notre Dame or Southern Cal.

This has usually happened very quickly: in the relevant games above, the Buckeyes have an overall 89-17 advantage in the first half, which has effects far beyond embarassing opposing defenses (see below). In those same games, it's also proved patient enough and versatile enough to dominate time of possession and get off significantly more snaps than its counterpart, cutting off comeback opportunities in the process (see especially the Iowa game for how quickly this combination can bury a competitive team and put it in desperation mode); the lone exception to that trend is Penn State, the only defense that's managed to force a couple turnovers and keep the score close enough late enough to keep the entire offense in play - only in the Nittany Lions' case, it was a too-heavily outmatched offense.

The defense has much to do with this. Maybe. Certainly it's doing its part by not allowing teams to keep up on the scoreboard out of the gate, and then benefitting from the premature onset of necessarily one-dimensional comeback efforts. It's also forcing a ton of turnovers - twice as many interceptions as last year's defense, six games with multiple picks - which is a large part of maintaining the nation's top scoring defense and situations that pre-empt any attempts at running and open up a pretty fierce pass rush (three sacks per game) which, in turn, leads to more turnovers. 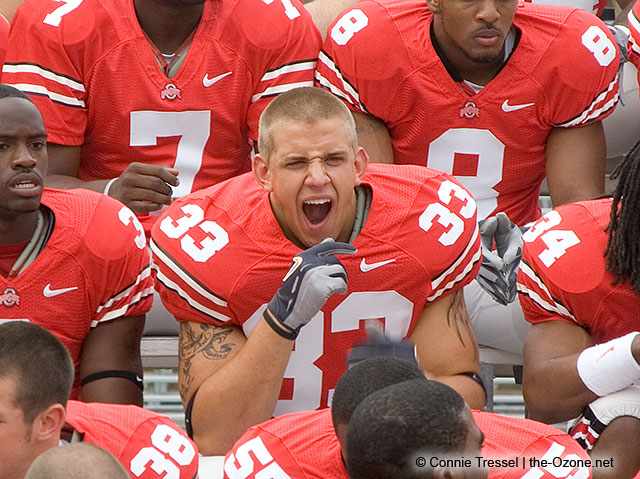 They can't all be thrillers. Especially when none of them are.

Pessimistic Mitigation of Positive Trends: Outside of Saturday's colliding juggernauts, only one team - Wisconsin - has come out of the Big Ten feeling any justifiable good about itself. And Ohio State didn't play `em (the Badgers would feel less good, presumably, if it did). Which helps explain why it was so difficult for SMQ to decide which vagabond-beating to include above as "relevant," though not to lend any insight into why, exactly, the legions questioning the schedules of Rutgers, Arkansas, Notre Dame, et al, have not set their sights on the Buckeyes, conquerers to date of precisely one team currently ranked in any poll. That would be the one that just lost to Kansas State.

Iowa: looked alright at the time, Syracuse overtime be damned - c'mon, no Drew Tate! - cruising on preseason hype and four cupcake wins to an undefeated showdown, but the Hawkeyes are an embarrassing 2-4 since the OSU beatdown (wins against deflated Purdue and Northern Illinois). Michigan State: pretty obviously decided it had accomplished enough for the year, again - aside from the second half at Northwestern - and went into hibernation in the third quarter against Notre Dame. Indiana? No. Minnesota? No. Penn State? Only on defense. If one wanted to argue OSU's success is inflated by consistent mediocrity on the opposite side of the ball, it would be a pretty tough point to refute.

On that note, only one defense -  Texas - can really begin to approximate Michigan's front seven and run-stuffing proclivity, and against the `Horns, OSU struggled in at a little under three yards per carry. It also struggled at Illinois two weeks ago, mightily, when it managed 20 total yards and went backwards on five drives out of eight in an abysmal second half.

Exploitable Trends of Which to Beware: The Buckeyes' run defense is ranked 11th, which stands out and looks great if there's no context attached to it. At their most recent opportunity, the Worldwide Leader's only partly slobbering studio anchors - and now its columnists - were praising the statistical awesomeness of this relatively young OSU defense compared to the first round farm club that finished last season rubbing opposing faces in the dirt as the best run defense (and for SMQ's money, the best overall) in the country. Hawk and Co. allowed a meager 2.35 yards per carry over all of 2005, best nationally, but again, context: only two teams managed more than three yards per carry, and only Minnesota - in a two-touchdown loss - was able to crack four (or even get anywhere near it).

Compare, as they say, and contrast: considering Cincinnati and Indiana combined for three yards between them (largely due to, yes, sacks and few attempts), the overall numbers look good, but six opponents this season have topped three yards per carry, and five of them have topped the 4.33 that last year was a disgraceful outlier against the Gophers. Texas, especially, at more than five and a half per carry, was never stopped, but UT let loose instead with a lot of excessively safe passes and turnovers. Note again the vast disappointment of this season's schedule, and the strength of last season's. SMQ thinks the ledger shows this unit is far more vulnerable facing a competent ground game.

This shortcoming hasn't particularly mattered because the offenses aren't that comparable, either: this year's unit has jumped out to such commanding early leads, opposing offenses have had no opportunity to play it straight past the second quarter, and the OSU defense has been spectacular in swallowing them up and forcing fatal mistakes once a little blood is in the water - again, go back to the turnover-scarred finales to the Penn State and Iowa games. Michigan, though, with its ability to pound and keep pounding, and a defense capable of giving the offense that luxury, is an entirely different animal.

The other Buckeye Achilles heel, for some reason, is third and medium (4-6 to go). Check it out: OSU has been fine in almost every other situation - and amazingly successful on third and long (Smith is 13-21 passing all season with 7-9 yards to go) and especially third and very long (13 conversions, 15 plays of at least ten yards in 34 snaps with more than ten yards to go) - but with 4-6 yards to go, Smith is at a relatively very low 52 percent completion rate, and the running game disappears (only three attempts, for -18 yards, presumably due to a sack or two); the conversion rate is .333, lower than any other situation. Of course, Smith has thrown four touchdowns to zero picks on third and 4-6 to go, too, so, you know, still pay attention there.

Advantage Buckeyes: Presuming, dangerously, Michigan will be able to run at least as well as Northern Illinois, Texas, Penn State and Iowa, it's in Ohio State's interest to hit the gas and keep the pedal on the groud as long as necessary - the higher scoring, the better, you have to think. With receivers as terrifying as Ted Ginn Jr., SMQ thinks an offense should always force a defense to spend an inordinate amount of energy to the big play threat by making the consequences of inattention clear out of the gate; the rest of the attack opens up as a result. Ginn offers many various methods to get heads on swivels and feet a step slow filling running lanes that haven't been open at any other point against the Wolverines - one step, one mistake, is all it takes with Troy Smith pulling the trigger. Speaking of Smith, pocket-oriented as he's been most of this season, his mobility has killed admittedly less aggressive units in both previous efforts against the Wolverines, in various ways, a facet Michigan has seen in three quarterbacks this year - Chris Nicksen, Drew Stanton and Kellen Lewis - and handled with mixed results (all have gained some scrambling/draw yards, though Nicksen and Lewis were also sacked a few times apiece). If - you know, if - OSU can get out into its familiar advantage, perhaps aided by a giveaway, Michigan's odds of avoiding falling into a one-dimensional game are not significantly better than those of Texas or Iowa.

The Wolverines must exorcise the ghosts of big games past