Florida State offensive coordinator Jeff Bowden resigned from the program, effective at the end of the season. After 13 seasons on the Florida State staff, Bowden made the announcement on Tuesday.

Jeff Bowden, who is head coach Bobby Bowden's son, joined the Seminoles in 1994 as the wide receivers coach. This is his sixth season at the helm of the offense. He was promoted in 2001, while still retaining his position coaching the wide receivers.

"I am disappointed in Jeff's decision," said Bobby Bowden. "I tried my best to encourage him to stay the course, but he was firm in his belief that it is time to move on. This is a big loss to me personally. I would hope that everyone understands that his decision is an emotional one for me and for that reason I'm not going to discuss it any further at this time."

This comes three days after Florida State was shut out, 30-0, by 18th-ranked Wake Forest, the first time the Seminoles were blanked in 232 contests. Florida State hadn't been held scoreless since the campaign-opener in 1988, when they lost to Miami, 31-0.

It was also the first time in the 31 seasons that Bobby Bowden coached the Seminoles that they didn't score at Doak Campbell Stadium.

Monday, Bobby Bowden told boosters "he had reached the point where he was upset enough to punch somebody over the criticism his son was taking." The process was "expedited" after the younger Bowden made a completely unexpected, in no way coerced visit to FSU Athletic Director David Hart Jr. to explain his stunning decision. Something about family - spending more time with them, SMQ is sure.

Finally, Jeff doesn't have to sit there anymore and wonder why his team's not blocking this guy or that guy.

Not fired, resigned. It was important to Jeff to leave on his own terms.

Update [2006-11-15 14:39:53 by SMQ]:
From the desk of SMQ's intrepid Tallahassee correspondent, reports of despondency and pandemonium on campus:

"The folks here in Tallahassee are dancing in the streets this week, not only because?of the?upcoming?homecoming weekend, but because maybe now?we can get our offense back in line. Seminole fans are?fed up?with losing games this year?and maybe this was the winning move we?needed.??See ya Jeff."

The coming days will be dark ones, but the community can survive if it pulls together. 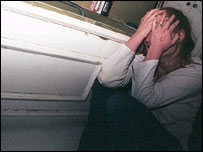