SMQ Homerism, In Pursuit of Happiness

Share All sharing options for: SMQ Homerism, In Pursuit of Happiness

If ever two teams were in need of optimism, Southern Miss and Virginia Tech could submit worthy applications: the low, low-octane Hokies have not beaten a winning team and are mired in a two-game conference losing streak, their worst such stretch since 2002, accompanied by a nationally televised tongue-lashing questioning the Tech character; USM, a winner in four of five but bad losers in two road games against winning teams and roughly two-touchdown underdogs, proceed without revelatory running back Damion Fletcher, briefly shelved, or his top three backups, who fled when leapt by the freshman.

The philosophy of Objectivism considers itself fundamentally optimistic, and to commune with high spirits, SMQ reached out for his weekly dialogue with a blogger, reporter or other "insider" of Southern Miss' upcoming opponent to the Virginia Tech Objectivist Club. He met with the club's treasurer, Chris Brown, over pied de cuchon with sweetbreads topped by a lacquered sheet of crispy La Mancha goat skin and a cappuccino of wild-mushroom soup to discuss subjective ideologies, contextual assumptions of intrinsicist dogmas and the metonymy of linking being with metaphysical paradigms.

SMQ: The most basic introduction to Objectivism states "Reality exists as an objective absolute -- facts are facts, independent of man's feelings, wishes, hopes or fears," often referenced in shorthand as "A is A." Virginia Tech has been outscored 60-30 in two consecutive games against winning teams. Its next five games are each against currently winning teams. What are the Virginia Tech man's feelings, wishes, hopes or fears regarding these objective absolutes?

CB: That is quite an analogy, and it is important that you noted there that "A is A;" i.e., A is not B. The Virginia Tech Hokies are a winning football team, we are not a losing football team. This is as equivalent of an identity. The past couple games where we have lost this identity are now behind us and we only hope to return to the winning status that we have created. As for our fears, well, they are only emotions and we choose instead to use our minds in recognition that with one of the best defenses in the nation, Virginia Tech will not lose another game in this football-town of Blacksburg,VA.

SMQ: Rand rejected his aggressive statism, but nevertheless advanced the Hegelian notion of the "Great Man" as driver of a successful society upon which inferiors are dependent in Atlas Shrugged. Conversely, last Thursday, surprisingly altruistic Kirk Herbstreit suggested the Hokies' "Great Man," Michael Vick, had actually brought about the program's eventual demise by steering its mindset away from the collective and to the individual. Sideline cameras also caught Hokie players bickering - not unlike Rand's "looters" in the later chapters of Atlas Shrugged - and blamed this in part on the corrupting influence of bad seed Marcus Vick, drawing the obvious parallel to Rand's dark-spirited sibling, James Taggert. Did the legacy of Tech's "John Gault" - the elder Vick - help bring about the current malaise, or have his successors cannibalized his achievements en route to destruction?

CB: First of all, if anyone were to be compared to James Taggert and any other of Atlas's parasitic politicians, it would be Herbstreit and Corso and the rest of them who prey off of the successes of talented, athletic specimens of man. Besides the possibility of racist suggestions, placing the blame of a sub-par season on two of our finest athletes is flagrantly irrational. Why not blame Jeremy Shockey and Willis McGahee for last week's brawl in Miami? If there indeed are any problems with our organization and we are headed towards destruction, we would be led there by our coaches and directors and the culture they create -- not from the athletic brilliance of the Vick brothers. 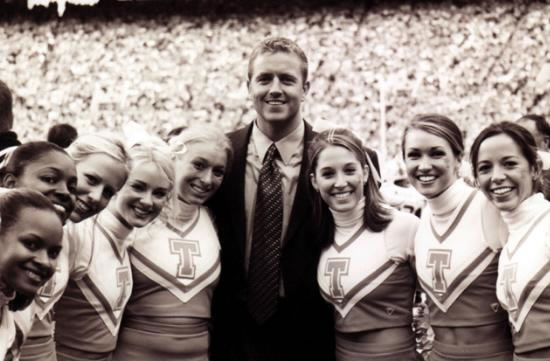 CB: Our team in general has a very high sense of life because we do not accept loss and failure as a given and we are not satisfied until we meet the ultimate ideal of being #1 in the nation. The aspect of our team that we most value in achieving this ideal is our defense, as you will see on Saturday. Without much offensive help from our unexceptional QB, Glennon, the defense will likely become responsible for most of our points, and in effect, our win.

SMQ: Many commentators would regard a Southern Miss victory Saturday as "magical," but Objectivism rejects the supernatural or anything deriving from "mystics" as "a brazen advocacy of contradictions." Is there a rational basis for projecting a USM win?

CB: Although a Southern Miss win may be unlikely, it could not be considered irrational. This philosophical contradiction comes from those "mystics" you mention and those praying and sacrificing themselves to ghosts and living their life for the illusions of an after-life. Objectivists choose to live their lives for themselves, for their own values. Both football teams are equally rational: valuing a win and choosing not to sacrifice the game for the sake of the other team's wishes.

A Hokie fan demonstrates the principles of rational self-interest

SMQ: "Hokies" is just made up gibberish, right? What's with the turkey?

CB: Our name goes back to a century ago and the story of how our opponents called us "hokie" is less than fulfilling. To say that it is a great name or a poor team name would be purely subjective, so form an objective standpoint, the title of "Hokies" is no different than calling yourself a "Golden Eagle." As for the mascot of a turkey, I am unsure, but it may be important to note that  autumn weekends in southwest Virginia are composed of football and turkey hunting-- and of course bourbon.

In Mississippi, it's deer and  whiskey. And sometimes turkey, too. Southern Miss and Virginia Tech kick off in Blacksburg Saturday at 7 p.m. Eastern.